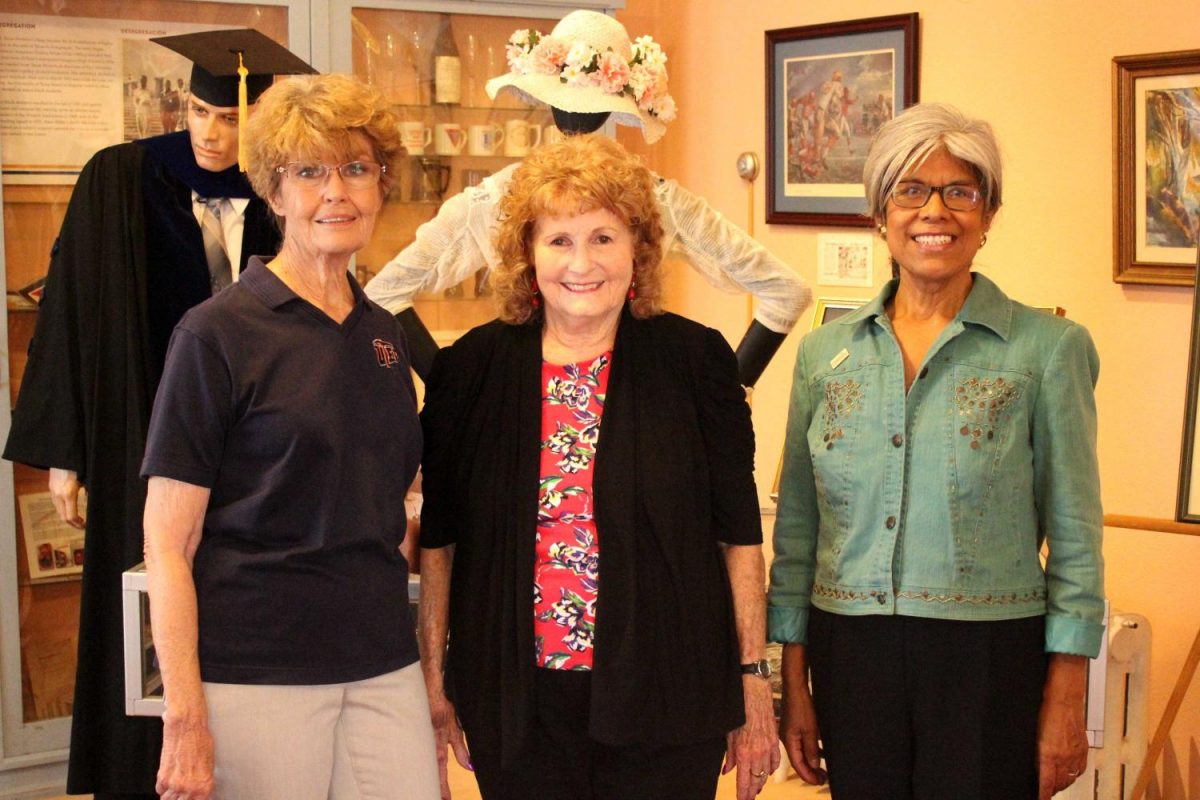 (From left) Briane Carter, Martha Broaddus, and Alicia de Jong Davis, were the main hosts of the place.

Hidden in between the Union and the Education Building is one building that holds all of the university’s history. Often one of the most overlooked buildings is also one of the most treasured—the Heritage House.

The house has served as the center for the Heritage Commission for over 23 years, but the commission itself has existed since 1981. This homecoming week, the Heritage House will commemorate the 103rd annual “first day of school.”

It was Dr. Natalicio who gave the commission a base in 1994. The building was the perfect place to house the Heritage Commission because of its ties to the first dean of the university, Steve H. Worrell.

The building that now serves as the Heritage House was built in 1921 as a home for Dean Worrell, whose wife is responsible for the university’s Bhutanese architecture.

The building itself has as much history as the archives it holds. The house had a lot of different lives before housing the Heritage Commission. At one point it was a dance studio, then it housed the original Upward Bound Program, the special projects center, the offices of Schellenger Research and groundskeepers stowed their mowers and equipment there.

Given its history, it only seems fitting for it to be the home of the Heritage Commission.

“He (Steve Worrell) and Mrs. Worrell lived here. This was not on campus at the time, so you can see the campus has grown up around it. Several folks, deans have lived here—presidents and deans,” said Briane Carter, chair of the Heritage Commission.

The commission is constantly working to not only preserve the archives, but to create new themes for the displays and main exhibits that are switched out twice a year.

The current theme is Golden Grad memorabilia from 1967 and some of the previous themes have included, “Women in UTEP history,” “90th anniversary” and the “1966 NCAA National Basketball Championship.”

Every year for homecoming, the commission honor the graduates who celebrate their 50th anniversary of graduation from UTEP.

“We’re getting ready for homecoming so we’ll have an open house. The golden grads, which are 50 years, they graduated in 1967,” Carter said. “These (photos) were taken from the 1967 yearbook. When they come to visit they’ll see some of the faculty and some of the classmates and hopefully stimulate some memories for them.”

Carter has been part of the commission for nine years, having previously worked as the director of the University Career Center for 30 years.

“I’m a retired staff member and when I was asked if I was interested in becoming a member of the commission, I said yes I was because I spent nearly 30 years here at UTEP, loved working with the students,” she said. “I’m a cheerleader for the university so this is an extension for me. My colleagues on the commission have been gracious enough to elect me chair of the commission.”

The commission was first created in 1981 by then UTEP President Haskell Monroe to fundraise for ceremonial regalia such as the mace and college banners, which he felt were needed.

“Dr. Monroe, who was a historian, felt that the commission should stay and help to become the archivists for the university. In order words, to maintain the archives and that sort of thing. Up to that point no one had really paid attention to it,” Carter said.

The original commission was made up of faculty members and they kept memorabilia in their offices, where it began to pile up over time. Having a building to house all of the memorabilia came as a relief for the commission.

Every item in that house in unique and has a lengthy history. Most of the archives are items that current students have no idea existed. One of Carter’s favorite items in the house is the freshman beanie.

The freshman beanies were used at UTEP up until World War 2. Every freshman wore a beanie to point out to upperclassmen that they were freshmen and any junior or senior could go up to them and ask them to perform tasks for them, such as carrying their books to class or singing the Miner fight song on command.

“I got really interested in that. Freshmen now don’t have to do any of that. I learned the other day that women also wore beanies,” Carter said. “When we had GIs that came back it kind of died out from there. We have a whole collection of little caps, little beanies.”

Ranging from the evolution of the Paydirt Pete mascots to a map of every building’s history to the progression of Greek life on campus over time, each exhibit set up by the commission presents a rare and often untold history of UTEP at different eras.

The house truly presents a deeper look into the university and everything its taken to get to this point in time.

The house is open to students Wednesday, Thursday and Fridays from 10 a.m. to noon and is also open for special tours that can be arranged by calling the UTEP Alumni Relations Office at (915) 747-8600 or sending an email to [email protected] They will be open from 1 p.m. to 4 p.m. Friday, Oct.6, for homecoming.