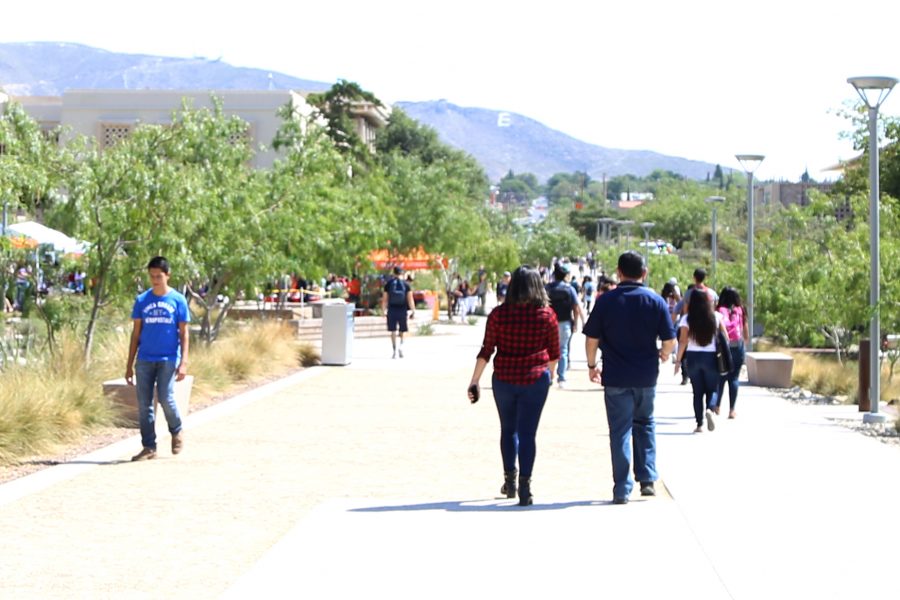 While many other institutions face a decrease in education funding and enrollment, UTEP’s enrollment increased for the 19th consecutive year.

“The fact that UTEP’s enrollment has continued to increase year after year is strong validation of the value students see in the university’s access and excellence model,” said UTEP President Diana Natalicio in a press release.

The university’s enrollment increased by 4.8 percent, this being the largest percentage increase since fall 2010.

“Students know that they can get a high-quality education and have special experiences at UTEP that are equal to or better than the opportunities available at other national research universities, and at a fraction of the cost. Moreover, our persistence rate shows that we walk the talk–once students enroll here, they stay,” Natalicio said.

With growth comes a bigger responsibility of maintaining the efficiency and good performance of the students, faculty and staff.
“Growth at UTEP is nothing new,” said Gary Edens, vice president of student affairs, in a press release. “We carefully monitor enrollment numbers and make adjustments to departmental budget lines so that we can increase the number of sections and hire additional faculty as needed.”

As UTEP strives to provide the best education, students believe having a high number of students could affect not only student performance, but also the professors.

“Having more students also affect the professors, they have to dedicate more of their personal time to grade a bunch of assignments,” said Cynthia Sustaita, junior computer science major.

This increase also brings up another notion that the interpersonal relationship between professors and students will be strained.

“With more students, it is harder for a professor to give its attention to one person, and also the distraction rate increases when you know there is too many people in the room,” said Victor Chavira, a senior electric engineering major.

Another problem the university faces is that as UTEP continues to grow, students face the challenge that this academic year, some of their classes may be overcrowded.

“Compared to last year, this year you can see the UGLC is overcrowded,” Sustaita said. “You get that these are big classes, but in my psychology (class) this is the case.”

Having more students enrolled also means there is a chance that classes will fill up faster.

“I think it happens a lot more often when you start college and you see which career to choose, and you change classes and so, but there comes a point where classes fill up too quickly and they affect those who truly need the class,” Chavira said.

Earlier this year, students also faced a struggle related to the high number of students enrolled–the search to find parking spots in the campus’ parking lots.

According to Edens, the increases in enrollment are caused by two factors.

UTEP saw increases in both recruitment and retention of students, with an especially strong retention of sophomore and juniors.
Edens said more and more students are also selecting UTEP as their top choice as a university and the number of new first-time, full-time students is up about 3 percent.

According to usnews.com, UTEP appears on the list of the top 100 colleges with the highest acceptance rates, with an acceptance rate of 100 percent.
To some students, the fact that UTEP has a very high acceptance rate is a factor to the larger population on campus.

“I have nothing against it, I believe it has its pros and cons, but I heard rumors that they accept more students because it gives them more money for funding, but if it’s to give us the best education, I’m okay with it,” Sustaita said.

According to Edens, the reason to maintain the 100 percent acceptance rate is because of the university strongly believes in its mission of access and excellence.

“Access to higher education is critically important to the future prosperity of our students and our region, we don’t want to deny that opportunity to talented and qualified students,” Edens said. “Of course, these same students still have to meet our high academic standards once they enroll at UTEP and many of them do, that’s why we take seriously our responsibility to provide students the support and resources they need to be successful.”

UTEP’s admission requirements for undergraduate students are almost the same as other universities. Students are required to take the SAT or ACT, present their high school transcript and turn in an application.

However Edens said the admission process isn’t as rigorous as other universities because about 50 percent of area high school graduates do not pursue any form of higher education.

“That number is too low for a community of our size. We will continue to admit students with talent and a dream to succeed,” Edens said.

Nevertheless, having a more rigorous admission process is a way to control the number of students enrolled, Chavira said.

“I think that for everything to be in control and not have overpopulation, they need to start with the admission process, thinking about the quality and not the quantity,” Chavira said.