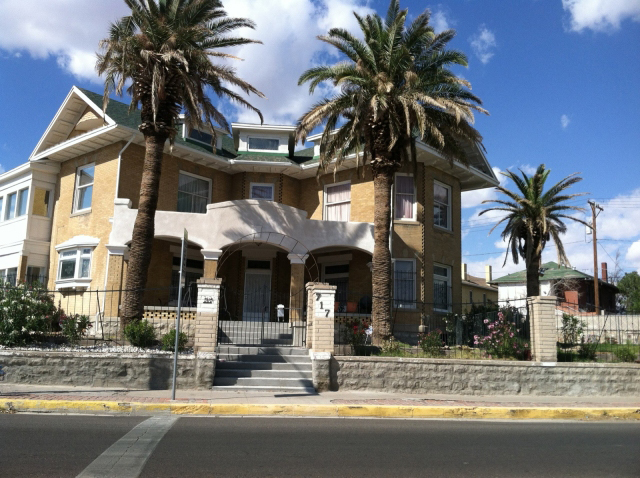 The buttery aroma of freshly popped popcorn fills the air as lines of people eagerly anticipate the start of the film. They hurriedly walk into a dimly lit room with a bit of uncertainty as the best seats are found. The noise of quiet chatter among the seated crowd is heard as the images playing on the large bright screen demand attention.

This is what being in a movie theater feels like.

There are some that still hold onto this tradition and seek to keep it alive to remind others of the way a movie-going experience used to be, before the age of cell phones and on-demand film apps such as Netflix and HBO GO.

Film historian and archivist, writer and collector, self-proclaimed cinephile, and director of the Sunset Film Society, Jay Duncan, sets out to do this. He has been hosting free movie screenings for over 17 years around the El Paso area.

Throughout his life, Duncan has been sharing his passion for film with audiences across the board through his various programs on TV, in classrooms, film festivals and more recently through his film society.

Duncan has been a fixture in and around El Paso over the last 40 years, having an influential role in saving the Plaza Theater from the first demolition threat back in 1974. His grassroots efforts made way for the El Paso Community Foundation to take over the role of once again saving and restoring the historic theater.

Also in 1974, he began teaching Introduction to Film Theory and Criticism, a film history course through the English department and continuing education at UTEP.

Adding to Duncan’s other accomplishments was his TV program, “Jay’s Pix,” in which he would show a classic film and share knowledge about the historical context of the film itself.

About four years ago, he came into contact with Rosa Chavez, the proprietor of the historic Hixon House in the Sunset Heights neighborhood. This sparked an idea to create a monthly film series at the house.

“Let’s do a film series, maybe once a month and maybe develop it into a film society,” he recalls telling her. “That way we can utilize this historic piece of architecture, in a historic neighborhood, seeing historic film.”

On Saturday, Aug. 17, 2013, his vision came to fruition and the first of many free screenings was shown to an audience of about 40 people in the historic Hixon House, which was built in 1908. The film was “Somewhere in Time,” the 1980 romantic sci-fi classic set in 1912 starring Christopher Reeve and Jane Seymour.

The name of the film society speaks for itself having initiated its run in the historic Sunset Heights neighborhood and showing the films at around sunset.

Aside from the fact that these screenings are free, there is also a difference between the screenings shown through his film society and those that can be seen in a movie theater.

“I want to educate and enrich audience members through historical film,” Duncan said.

He chooses to screen historical classic films including independent and foreign films, and opens the screening with a film talk, where he provides tidbits and facts about the film.

“I try to limit it to where they leave wanting more, but not too much where they leave knowing more than they wanted,” he said. “It’s just enough background and I try to give a little more insight.”

The Hixon House was home to the Sunset Film Society for the next five months. The film society had become a success and gained an audience that was too large to fit into the house. Duncan moved his screenings to the Trinity First Baptist Church while he transitioned into finding a more suitable location.

Ardovino’s Desert Crossing would become the next place the film society would call home. The first presentation was on April 27, 2014, with the film “Sunset Boulevard.”

The free monthly screenings continue today and normally fall on Sundays at noon unless it is a special feature. The most recent special screenings were “Close Encounters of the Third Kind” and “The Godfather Part II.”

Over the next year, the Sunset Film Society evolved and Duncan was able to find a new location to draw in more audience members.

In July of 2015, Duncan partnered up with the International Museum of Art, formerly the original El Paso Museum of Art, to expand his program. This adds a weekly presentation to his ongoing monthly series at the Ardovino’s location.

Unlike the Ardovino’s Desert Crossing, the museum offers an actual theater in the basement and a space to sell concessions.

Since the expansion of the Sunset Film Society, Duncan has incorporated more than just classic films, but also newer family-friendly animations as well.

“These are films that are future classics if they aren’t already,” he said.

The second International Film Festival will continue screenings for the next three Saturdays at 2 p.m., until its conclusion on Sept. 23 at the International Museum of Art.

“They are very important for individuals who don’t like going to the traditional theater and having to deal with a lot of people,” Manchester said. “Not only because of the price, but also given the enrichment and the cultural-type feel, which you don’t get that at a traditional theater.”