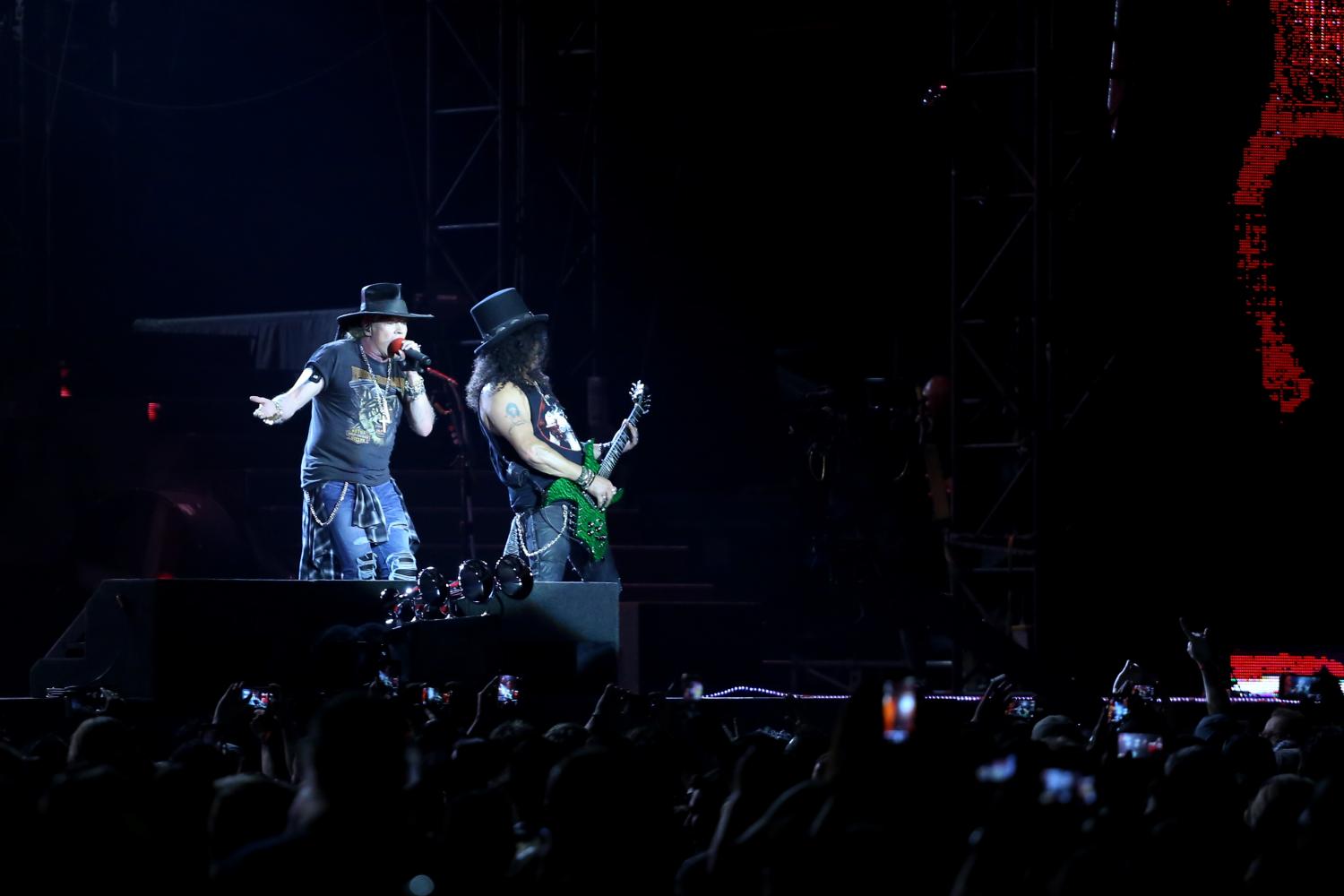 Guns N' Roses played at the Sun Bowl on Wednesday, Sept. 6, for their "Not In This Lifetime Tour."

Legendary Los Angeles band Guns N’ Roses rocked the house in front of a nearly sold-out crowd at the Sun Bowl on Wednesday, Sept. 6, as part of their “Not in This Lifetime” tour.

The tour was born after a quote by frontman Axl Rose, who when interviewed by TMZ about a possible reunion answered “not in this lifetime.” The premise of the concert series reunites three of the original members of the band, Rose, iconic guitarist Slash and often unsung hero and bassist Duff McKagan. All three musicians had not performed together since the “Use Your Illusion” tour of 1993. Drummer Frank Ferrer, keyboardists Melissa Reese and Dizzy Reed and rhythm guitarist Richard Fortus round up the rest of the lineup for the tour.

As for the opening acts, Guns N’ Roses have brought along different guests such as Alice in Chains, The Cult, Wolfmother and in the case of the El Paso date, ZZ Top.

The Houston natives packed in a set that was permeated by the layering of classic hits and some of their more recent material. The set fused tracks such as  “My Head’s in Mississippi” and “Legs” with a lackluster set of white lights and a spotlight to shine on the crowd. It wasn’t until “Sharp Dressed Man” sent the at-the-time middling turnout into a frenzy, showcasing the band’s ability to groove to bluesy riffs and perform blistering guitar solos with their characteristic composure.

Their set ended with “La Grange,” which made a better use of the lighting by playing with the drum fills and coordinating it with the flashing white lights.

Once it was finally time for Guns N’ Roses to take stage, the Looney Tunes theme song served as a preamble for the band to get ready to kickstart their set with “It’s So Easy.”

The stage’s color pallette quickly shifted to red for “Chinese Democracy,” the single from the polarizing album of the same title. Although he wasn’t part of the band when “Chinese Democracy” was recorded, Slash retooled the guitar melody for all the songs in the album specifically for this tour.

The crowd roared as Slash teased the intro to one of the the band’s hit singles, “Welcome to the Jungle.” Rose displayed an unexpected level of chemistry with his bandmates to go along with the moxie fans of Guns N’ Roses have come to expect from the lead singer over the years.

Another high point of the night came with “Better.” Despite not being one of the band’s signature tracks, they still made an effort to treat the track as one of their flagship singles by giving it a special set of red lights and fireworks.

Guns N’ Roses had a very diverse set. They played every track in their 2004 “Greatest Hits” compilation, while also focusing on playing most of the songs from their critically acclaimed debut project, “Appetite For Destruction.” They even played deep cuts such as “Mr. Brownstone,” “My Michelle” and “Rocket Queen.”

The electrifying “Sweet Child O’ Mine” was another highlight of the night, with Rose wearing a baseball hat and asking the crowd to sing along during the song’s outro. The frontman kept the outfit rotation going throughout the night, sporting different flannels, t-shirts and hats.

Slash’s fret-shredding abilities were on display during the performance, with various guitar solos sprinkled throughout the night. The one that stood out the most came after “Yesterdays,” where he showed why he is one of the most iconic guitarists in the history of rock thanks to his signature rapid-fire tapping technique.

In terms of individual performances, Rose delivered with an emotional interpretation of “November Rain.” The singer carried through the first few minutes of the song with his crooning vocals and the powerful main grand piano melody.

The concert featured some tributes to mixed results. The cover of Wings’ “Live and Let Die” simply sounded dissonant and tone deaf in comparison to the original composition. However, the cover of Soundgarden’s “Black Hole Sun” in honor of the late Chris Cornell, and the unexpected cover of The Who’s “The Seeker,” showed Guns N’ Roses’ versatility because of the experimentation factor that went into the performance.

“Paradise City” closed out what was a night of celebration of the band’s ample catalogue with confetti, fireworks and blinding lights.