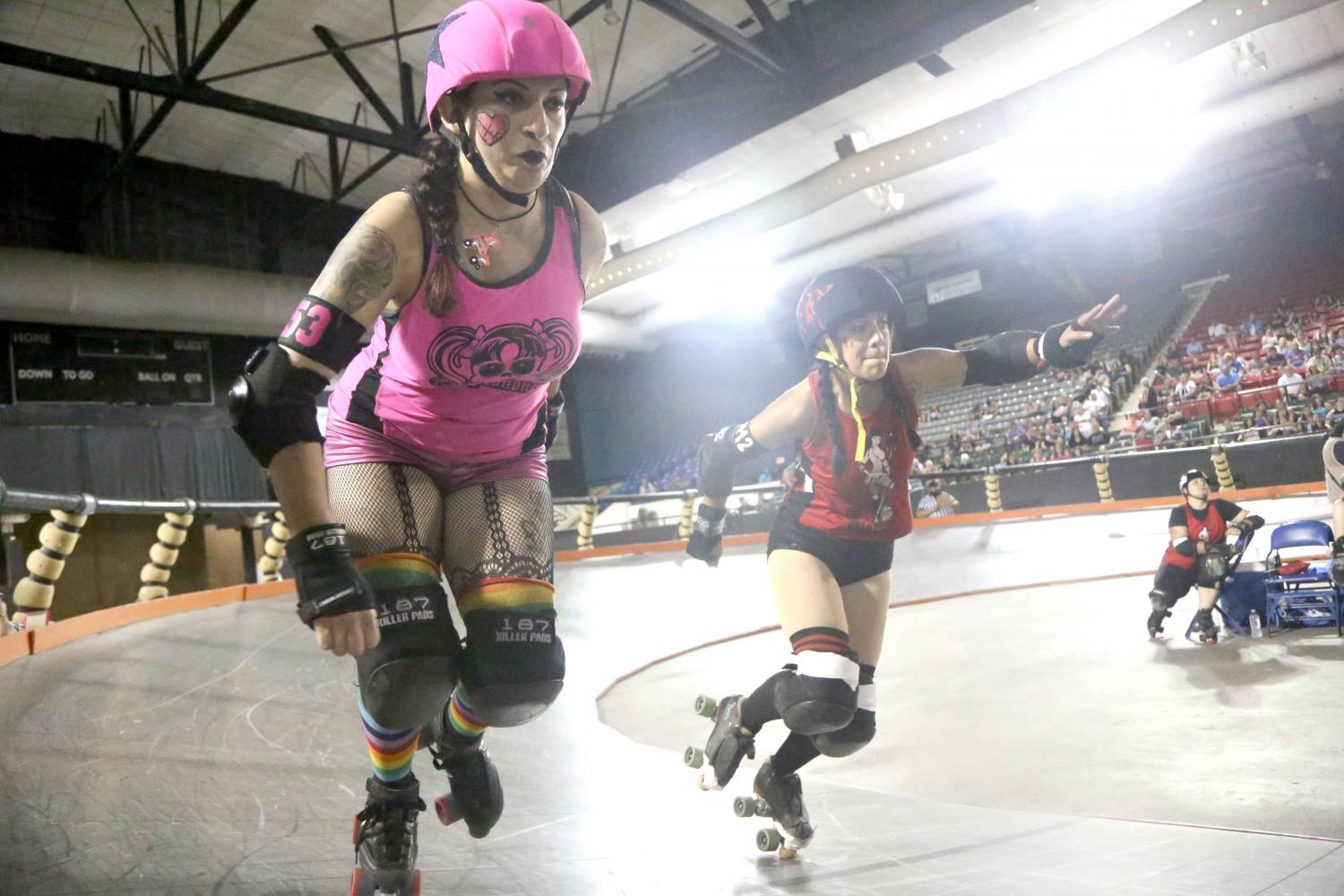 Las Viudas Negras and the SeXecutioners dominated the Sun City Roller Girls’ (SCRG) double header “Slice Girls” in their first bout of the season at the El Paso County Coliseum on Sunday.

The first bout saw Las Viudas Negras beat Las Catrinas 59-36 in a grueling match, where two blockers from Las Catrinas got ejected in the first period for excessive fouling.

The scoreboard slowly built up as Las Catrinas were unable to stop jammer Rainbow Ninja, who ran free as she broke through the pack twice scoring a total of eight points. Las Viudas Negras did not have a significant standout performance from a single jammer in the first period. However, the team had five different jammers all get on the board despite sloppy blocking on both sides.

At the half, Las Catrinas broke their pumped-up huddle and hit the ground running, scoring seven via jammer Ravenclaw-Her in the first jam of the second period.

Las Catrinas’ jammer Medusa got the bout within arm’s reach as she sped through the pack, making it 30-20 with 11:13 to play. Both teams scored in the next jam keeping it at a 10-point difference–34-24.

After a double ejection, Las Catrinas played jam four with only two blockers allowing four points. Las Catrinas’ jammer Wendy Scarling responded immediately by capitalizing on a disorganized pack of blockers for seven. The bout was 40-31 at the end of jam five.

The last few jams of the bout were marred by mistakes by the Las Catrinas despite being just nine points back. Las Catrinas’ blocker Fullmetal Jackie was ejected in the second-to-last jam and the scoreboard quickly got out of hand.

The SeXecutioners overpowered Las Diablas in a one-sided rout that ended 112-43. SeXecutioners jammer Trixie Polverizer blazed past the pack in three separate jams for 20 points in the first period alone. She ended her impressive performance with 61 total points scored.

Polverizer can attribute her success to the fortress-like blocking by her teammates. In jam three of the first period, one of the blockers successfully contained the Las Diablas’ jammer allowing Polverizer to take the lead and score eight, making it 19-8.

Las Diablas showed some character before the game got out of hand. In jam seven, after a contested lap, jammer Battle Angel was able to successfully escape the pack scoring seven points and shortening the SeXecutioners’ lead. The bout was 35-23 at the end of jam seven.

The SeXecutioners led seven jams out of nine compared to Las Diablas’ two at the half.

Las Diablas had the chance to cash-in on a quick score after the penalty wheel landed at tug of war due to their more physical blockers. However, they were denied with ease by the SeXecutioners who seemed to make no mistakes throughout the night.

The SeXecutioners’ showed their physicality once more at the end of jam three in period two. Polverizer broke free from the pack only to find Las Diablas’ blocker Sarcasm ScarGasm—a significantly bigger blocker–in her way. The SeXecutioners’ star player lowered her shoulder and trucked Sarcasm ScarGasm for one of the most impressive plays of the night. This play also helped them double their lead on Las Diablas 64-32.

The bout ended with the SeXecutioners leading 11 out of 14 jams.

The next SCRG doubleheader will feature the Chuco Town Chulas going up against Las Diablas, and Las Catrinas facing the SeXecutioners on Aug. 20.