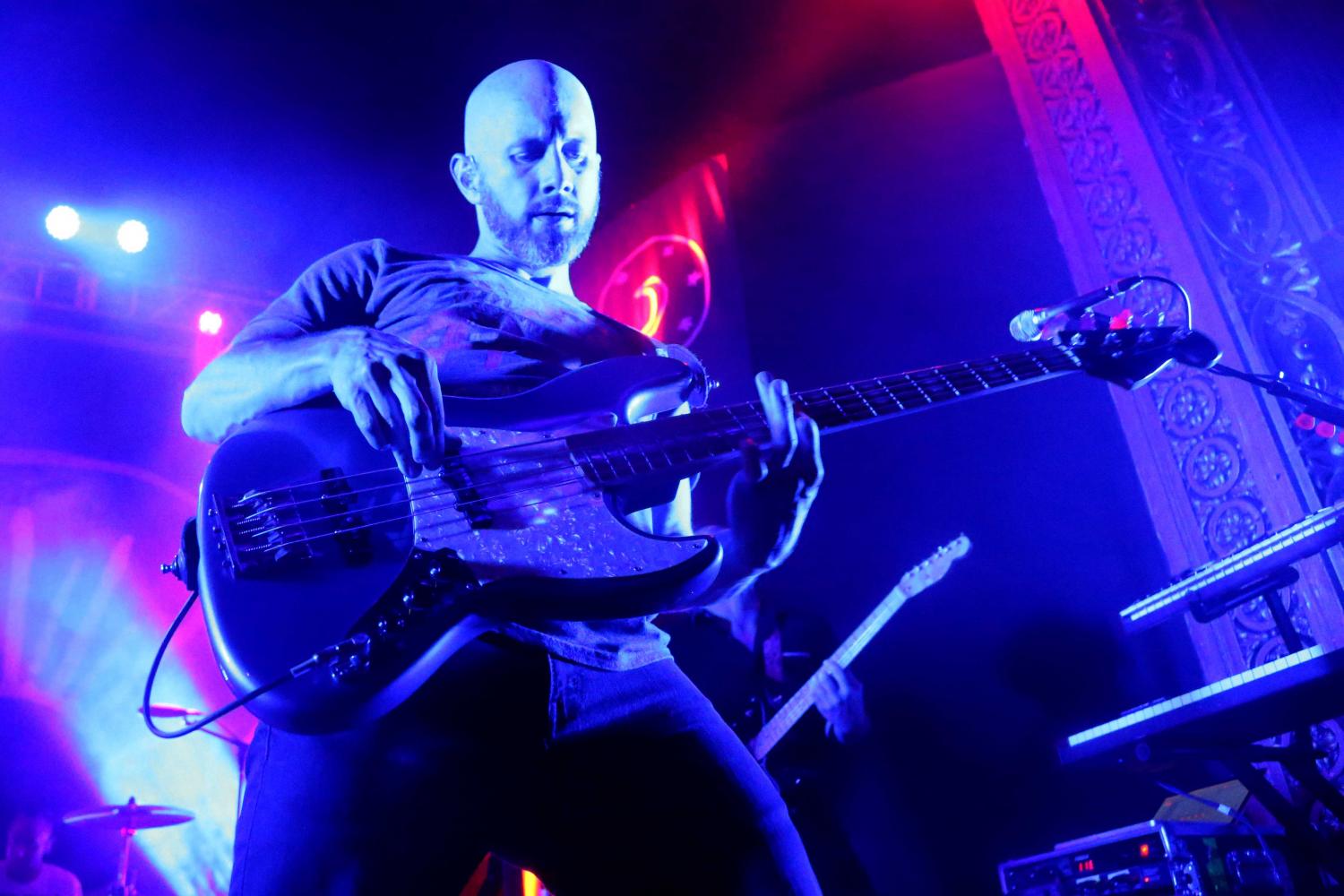 Taking Back Sunday perform for a solo out show at Tricky Falls on Tuesday, July 25.

Taking Back Sunday returned to El Paso for their 10th time. They played at Tricky Falls on Tuesday, July 25, and performed songs from their latest album, “Tidal Wave,” as well as older hits, such as “So Last Summer” and “El Paso.” Alternative rock band Modern Chemistry and metalcore group Every Time I Die joined TBS at the show and are touring with the band for the first month.

Why do you guys like performing in El Paso?

SC: When John and I came back to the band and presented in the beginning in 2010, we met up in El Paso because we found a really great studio that is kinda secluded out in Tornillo—Sonic Ranch. We were able to spend a lot of time together, bonding again for the first time. We hadn’t been in the same room in seven years so it was the perfect place, it was very easy to fly into and get right to work and not have any outside distractions. Sonic Ranch was such a great place to be able to do that. We stayed in the house that was right across from where the studio was, we had time to work on songs and reconnect as friends. The songs that came out of the sessions I think were the catalyst to where we’ve gone now. I think that was a lot of fun, we just had a lot of fun. It’s in our heart for El Paso and what it did for us and for our lives because it really changed our lives. Taking Back Sunday really had a significant rebirth at that time so we are really grateful for that.

You guys have a song named “El Paso” …

SC: That was one of the first songs we wrote as a group. Mark and Eddie had the riffs going and Mark and I worked on it at home because everyone else was in different spots of the country, but Mark and I live very close to each other so we started working on that song. That was one of the first songs that came out of our El Paso sessions and we think that the sound of it really encapsulates the craziness of that time and how wild and awesome it felt.

You guys are coming on your 20-year anniversary, what has it been like?

SC: It’s been a wild ride. A lot of ups and downs, but I wouldn’t trade it in for the world. Adam says it every now and then on stage and he means it, we all believe we are the luckiest guys in the world. I mean this was my dream since I was like five years old, listening to the Beatles and Guns N Roses, and a little bit later Nirvana. Just dreaming that I could get to play music for a living and tour the world with my friends and have people sing along to our songs. We are just amazed we can still do this.

For a band with a long tenure, how would you describe your evolution in sound?

SC: When we started out we were just kids, and we were trying to make songs we like, songs we want to listen to.  That’s always remained true, we never tried to follow a trend or jump on a band wagon or do anything that wasn’t true to ourselves. And that’s stayed the same, I think we become better musicians, better song writers. I think as lyricist, John and Adam have gotten really good at being more succinct at hitting certain points without using as many words and writing songs more about their lives. I mean all the songs have been about our lives but as your heard in “Tell All Your Friends” was about girls and friendships, breakups and things like that. Now it’s about growing up and becoming an adult and real-life issues that we encounter. I think it’s a lot more diverse lyrically. But I think we are still a lot more intelligent in the way we write songs. I think it’s more impressive.

We are coming in on a year of the releasing “Tidal Wave” and that felt mature in terms of lyrics and sound. Can you talk a little more about that?

SC: It was just a really fun process to write and record. We did it in Charlotte, North Carolina, which is where John and Adam live. There was such a good energy. Mark and I stayed in Adam’s house. It was a really good familial atmosphere and everything. That was a lot of fun to just work in that setting, it wasn’t like we were in a secluded area like we were with the self-titled record coming back. It was nice to kind of have a little touch of home. Our friend Mike Pepe he basically came along with us to the studio where we recorded and he’s a youngish engineer making his way up and everything and he just had such a positive energy. He brought so much to the writing process, so we felt very free working with him. We brought in our friend Mike Sapone who worked on the original demo that I did with the band back in 2000. It was very fun to be able to work with him, he just had so many great creative ideas for the direction of the songs. It was a very fun process and I think we all felt very free. We just kind of followed our instincts, we didn’t think too much about it. I don’t think we over-thought a lot of the songs. We just kind of let them go as naturally as we possibly could. I think that’s why it sounds like it does.

How is that going to affect future projects?

SC: Honestly, I have no idea yet, we’re still in an early change of the move. We’re passing around demo ideas and things for whatever the next record will be. That’s far off in the future. We’ll see how schedules work out.

Were there any things you would have included that didn’t make the final cut?

SC: No, no, we put in basically every song we wrote. We were so proud of everything, that we didn’t really feel like we could leave much off. There weren’t really b-sides of things with this record. There were a lot with “Happiness Is” and things like that on previous records; self-titled had a lot of b-sides too. This one we just kind of put everything, we focused so much time and energy into each song that we didn’t really leave anything off.

Do you feel like your fan base has changed over the years?

SC: I feel like a part of our fan base went away a little while. And I feel like they have been coming back slowly but surely. This tour has been very eye opening. For a long time, especially when John and I came back to the band, our sound of music was very uncool and that’s alright. We kept working, we kept putting out records, we kept evolving and growing as musicians and artists and now we’re seeing a significant boom. The shows are selling out and we feel really really fortunate to see this big turnaround and to see things happening about our band that hasn’t been there since the early 2000s. We’re just so grateful to keep doing this like I was talking about earlier.

What are you guys listening to these days?

SC: I had on a nice 80s mix before as you guys walked in. A lot of Madonna and Cindy Lauper. I love The Menzingers, I’m wearing a shirt right now. I think their new record is fantastic, their song “Lookers” is one of my favorite songs of all time. It’s just like a punk rock songs. Just bands that I’m friends with. It’s just a fantastic song and a fantastic album. It’s always hard to remember. We’re always making different playlists and stuff.

Have you felt pressure to follow trends and change your sounds over the years?

SC: No, that’s the one thing we never felt any pressure for. Number one, we’re not very good at it, the five guys in the band also have very different styles of music that we listen to. We’re fans of everything basically, but we have our own things that we like better than others. And we don’t really follow trends in what we’re listening to either. You know like I was talking about listening to Madonna songs and stuff, not a very cool thing to listen to at the moment, you know 80s Madonna songs. So, I think there’s a synergy there when the five of us work together. When we work on these songs we couldn’t even imagine following what’s the popular thing. When we started a popular thing that was happening was the rap-rock and that just wasn’t us it wasn’t something we listened to and it wasn’t what we identified with. Maybe our band could have been bigger for a moment if we tried it, but what we did was always was something that was very true to us and that’s something we’ve continued on because we don’t know any different. We really believe in what we’ve done and we really believe in the songs we write. And it’s not just a fad, it’s really who we are, so for better or worse were gonna keep doing it.

Linkin Park sort of rose in fame alongside you guys, how did you feel about the news regarding Chester?

SC: It’s horrible, you know. For any artist, I think there’s the big dark side that comes along with it. Guys like us. There’s a deep desire to put yourself on stage in front of thousands of people to get that kind of gratification or something and it’s in all of us and I think that comes with a dark side, a sort of neediness, I don’t know exactly what that would be. I didn’t know Chester at all, but he obviously was dealing with a lot. I’m no psychologist so I don’t know exactly what, but yeah it is horrible to hear. To know that someone is in that much pain inside, that they would harm themselves in such a way, it’s heartbreaking. It could have been someone in the biggest rock band in the world or you know it could be your next-door neighbor. When you know someone is going through that mentally what’s going on psychologically it’s very hard to take it out, no matter who it is. It’s very sad, I feel horrible for his family and his kids.

What are your plans for the future?

SC: A lot more touring, a lot more recording. The future is bright. We are very motivated to work on new songs and everything. “Tidal Wave” hasn’t been out for a year yet, so we’re still looking forward to doing more touring on that and yeah we’ll see what the future holds.