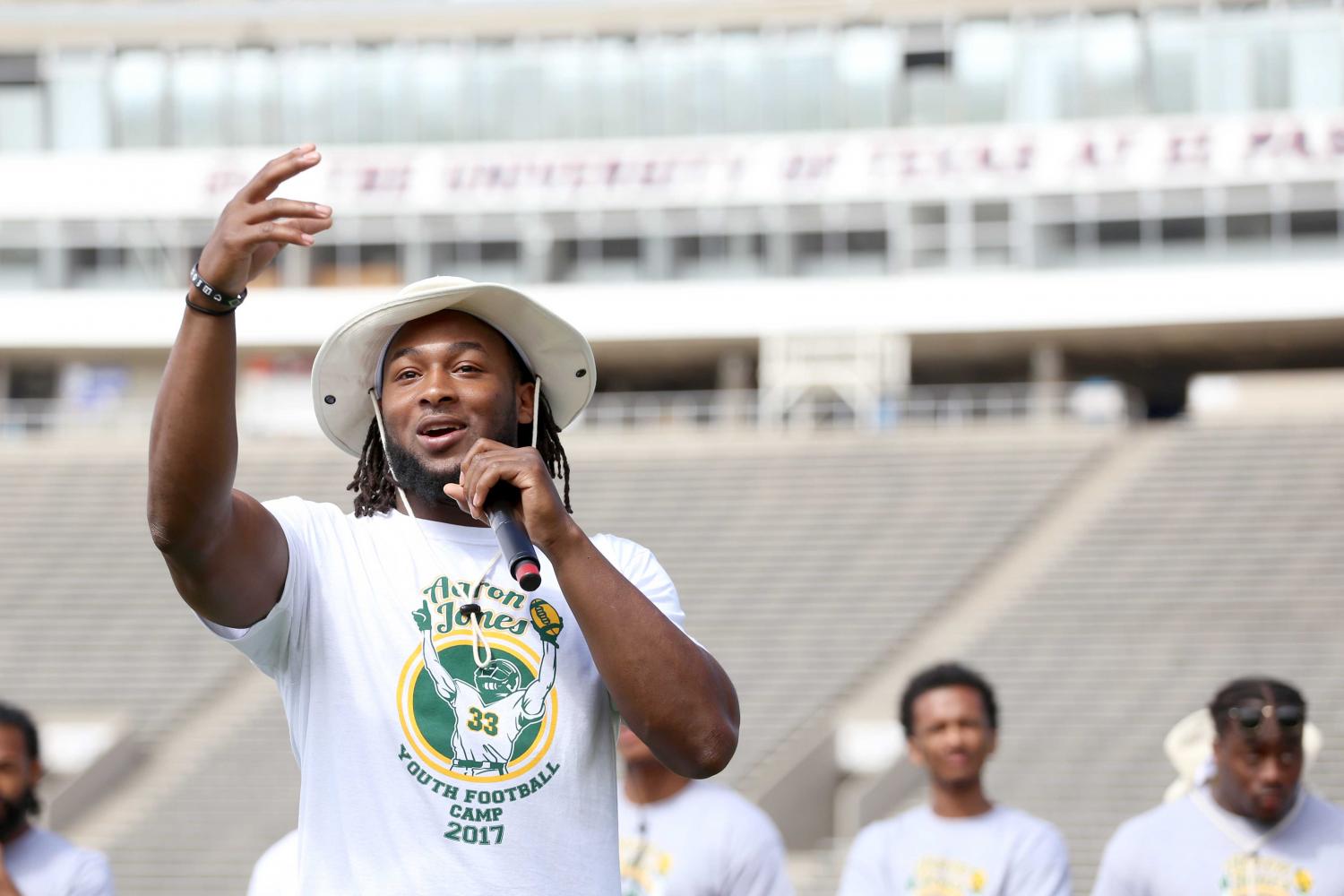 Aaron Jones Youth Skills Camp saw over 1,200 attendees throughout the two days of the camp.

Instead of relaxing his last days in El Paso, former UTEP running back Aaron Jones decided to do something that was personally worthwhile.

Jones will be heading back to Green Bay on July 25, for training camp. In his last days in the Sun City, Jones held the first-ever Aaron Jones Youth Skills Camp, which was a free, two-day football camp for local children at the Sun Bowl.

“They’re no different from me,” Jones said. “There’s no reason I made it and they can’t. It’s about seeing someone come out of El Paso and knowing they can do the same.”

The camp reached nearly 1,200 attendees throughout the two days and was accompanied by fluctuating weather. On the camp’s opening day, July 21, the camp opened its doors to children from 5 through 14 years old. Harsh rain was a factor in day one of the camp and resulted in the skills portion being cut short.

“It was a bit downside with the weather that wasn’t fully cooperating with us,” said Ryan Metz, UTEP’s starting quarterback who volunteered at the camp. “I think the kids still had fun with the limited time they had. Being able to see and meet Aaron—that was probably the biggest things for the kids.”

As the rain poured down on the first day, Aaron kept the spirits high with an extended autograph session and spent more time with the children.

“The kids love him,” said Alvin Jones Sr., who helped his son run the camp. “I felt sorry for Aaron’s hand because he signed so many autographs yesterday. It’s beautiful to have almost 1,200 kids between yesterday and today come here, and seeing the smile on their faces was priceless.”

But on the second day clouds cleared for the morning camp and proved to be beautiful weather for all the attendees, this time being high schoolers.

The campers were exposed to different drills corresponding to their positions, and they participated in various team drills that had each offense trying to score on the defense from the 50-yard line.

“It was just awesome, beautiful weather, the kids getting after it and it was really good competition all around,” Metz said. “I think it was just as much of a blast for the kids as us (the volunteers).”

Among the volunteers, a surprising visitor came out to support the camp. Former Miner and now Seattle Seahawks linebacker Nick Usher made an appearance and was able to step foot on UTEP turf once again before heading off to training camp.

“It feels good to be back here, El Paso’s my second home. I’ve been here for four years and I fell in love with the place,” Usher said. “I was telling some of the guys here earlier how much I missed it—just all the camaraderie you have with all your teammates, it’s different. I’m really excited for this new step.”

The incoming NFL rookie has already been given the chance to work alongside some of the Seahawks players and veterans. He also said he is excited to head back to training camp.

Similar to Usher, Aaron has been taking a lot out of the preliminary stages of the Packers’ preseason training and is anxious to get back on the gridiron.

“I’m excited to play football,” he said. “I’m on all the special teams and I’m number three as the running back on the depth chart, so hopefully I move up. I’m ready to go to camp and make that happen.”

With the popularity of this year’s camp, Aaron has high expectations for next year’s camp.

“Hopefully my brother (Alvin) will be in the same spot as me, so it can be both of our camps next year and have a great turnout,” he said. “Hopefully we can also bring back some NFL players here.”