Duranguito will not give up 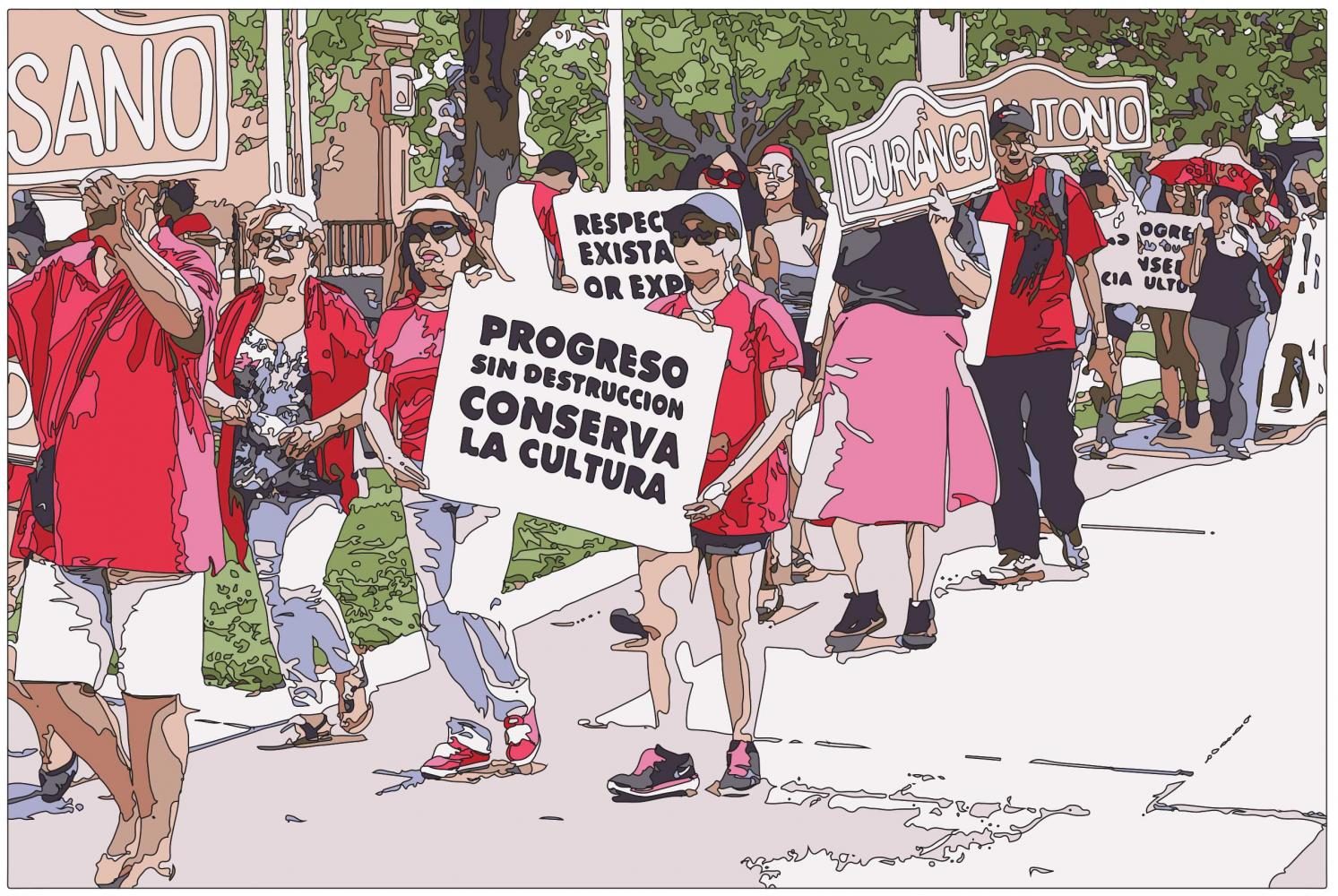 Last week, Austin District Judge Amy Clark Meachum ruled in partial favor of the city’s efforts to build a proposed $180-million arena in the Union Plaza area of Downtown El Paso by ruling that the city can build a multipurpose center, but they may not use voter-approved bonds to build a sports arena.

Due to the restraining order that prohibits the city from purchasing or demolishing any land until Aug. 1, the city cannot start on their project.

Judge Clark Meachum also called for a follow up hearing on Aug. 1 to explain the full details of the ruling to both parties.

While most would believe this ruling is in favor of the city, both parties believe they came out on top.

On one side, the city’s attorney Scott Incerto was excited with the ruling, saying that it was “everything we wanted.”

Although the grounds were established that a multipurpose center can be developed, those who are against the arena and for the preservation of Duranguito saw that the partial ruling was beneficial to their case because they believe it takes the topic of a sports arena out of the picture. They also believe it exposed transparency issues within the government and that it allows room to file another citywide petition.

What most thought would be the end is just the beginning of a battle that could be prolonged even further.

“This could go on for several years,” said historian David Romo, who testified at the hearing on July 18. “The city is going to try to appeal.”

During the opening statements, both sides gave a preview of their arguments.

The city’s attorneys argued that the claims against the stadium are false and only wishing to prolong the project. The attorneys said sports was a form of entertainment and added that the city should be able to include sports in the arena.

They also threw a curveball when they attempted to say that the petition the opposing side originally filed, which contained 2,400 signatures in efforts to make the Duranguito neighborhood a historical district, violated the city ordinances on the regulations because of “zoning” guidelines.

The opposing side argued in their opening statement that nowhere on the 2012 bond passed for a performing arts center did it mention sports. They asked that the judge rule a sporting arena out of the picture.

They also asked the judge to recognize the fact that if the efforts for a second petition were allowed, the public could vote on the matter.

The City Council did not act on the first petition because they stated that Texas law shows that voters are not allowed to vote on zoning areas.

Some of the key witnesses included Bryan Crowe, the general manager of Destination El Paso, who explained that the venue would be able to host about 62 events per year, including UTEP basketball games, concerts, plays, rodeos, graduations and other entertainment events.

Leonard Goodman, who served on the committee of the 2012 bond, testified how it was unclear whether or not sporting events would be allowed, but gave evidence to some allusions.

Senator Jose Rodriguez, who had just gotten out of the Texas Legislative session that day, told the court how frustrated he was that the city continues to use taxpayers’ dollars for this matter and hopes that it will be resolved so no more taxpayers suffer.

When Romo was cross-examined, he testified how he thought the voters in the 2012 bond were “misled,” and that the city’s attorneys came across as bullies.

“It felt like two German shepherds fighting me,” Romo said. “When they asked me, ‘aren’t you for the creation of jobs?’ I responded with, ‘how will it give a job to the 86-year-old Senovia Bustillos, who went to the hospital with a heart attack from being so harassed by the landowners? Now she’s living in a trailer out in the colonias.”

The attorneys asked whether or not Romo actually believed that the owners of the buildings in the Duranguito area actually envisioned down the line that the arena would happen, and Romo said he did.

El Paso CFO Mark Sutter testified that to his knowledge 39 of 40 residential tenants and 65 of 66 commercial tenants accepted relocation packages. In efforts to acquire the property, the city has spent $15 million, and now it has 22 of the 23 buildings that are in the arena’s location.

However, Romo said that there are more tenants still in the Duranguito area than most think.

“They are incorrect because during the date of the trial, and I’m saying that because things tend to go so fast, there were still different families living there,” Romo said. “They don’t want to move.”

The judge also denied the city’s request to halt the other side’s request to rule out the efforts for a petition.

Carmen Rodriguez, an attorney for the Duranguito side, said that although she’s partially content with the decision, she hopes this is where it ends.

“It looks like the city wants to appeal it, but I wish they wouldn’t,” she said. “I’m a taxpayer and we have to pay for it. I wish they’d settle on another location instead.”

Romo, who is also a member of Paso Del Sur, a local organization dedicated to preserving the historical areas of El Paso, believes that during the case, the city actually helped the Duranguito side.

“I think (the city) helped us prove our point,” he said. “They made a case for us. They tried to bully us and suppress the truth. They tried to quiet me and every three seconds they objected to my answer.”

When he spoke with the lawyers after the trial, Romo said the decision was groundbreaking.

“Carmen Rodriguez and former Texas Supreme Court Judge Harriet O’Neal (who is also an attorney for the Duranguito side) both said this was the first time when a community of a taxpayer bonds issue beat the city,” Romo said. “We made history.”

After the judge’s ruling, there were a lot of mixed emotions from both ends. First off, Mayor Dee Margo, who has stated during his election that he is in favor of the arena, was satisfied with the ruling and will wait on the final judgment and move from there.

“We are looking forward to the final judgment,” Margo stated in a press release. “The City of El Paso is pleased with the oral ruling that states we can build a new multipurpose performing arts and entertainment center in downtown.”

Jose Quintero, a member of Paso del Sur, participated in a meeting for those in support of the Duranguito resistance and residents of the area. In the meeting, the members debriefed the residents of the area about what transpired in Austin as well as advocated for a new petition.

“(The petition) is standing for El Paso’s history,” he said. “It’s standing up for El Paso’s most vulnerable neighborhood. It’s more than just a fight against a stadium; it’s the displacement of residents.”

If enacted by the city, the efforts of a petition would call for a voter option in November to make Duranguito a historical district.

However, Carmen Rodriguez foresees an unpredictable outcome when it comes to the petition.

“Unfortunately, it’s not clear what will happen,” Rodriguez said. “The city is going to fight it and try to make sure it doesn’t get implemented using what they call a ‘zoning change.’”

After the judge’s final judgment, Rodriguez anticipates the city will appeal the decision. It’s an appeal that she believes could go different ways, but for now, it’s a waiting game for her and the legal team.

“We aren’t ready to make our announcement yet. We are in a good position partially because we’re waiting for the city to make their next move,” she said.

While the sides wait on the decision, Romo believes that the past week’s ruling will resonate and set forth the precedent for future Texas cities to avoid the “transparency issues” with voter bonds.

“Huge win for transparency, but we still have to save Duranguito,” Romo said.