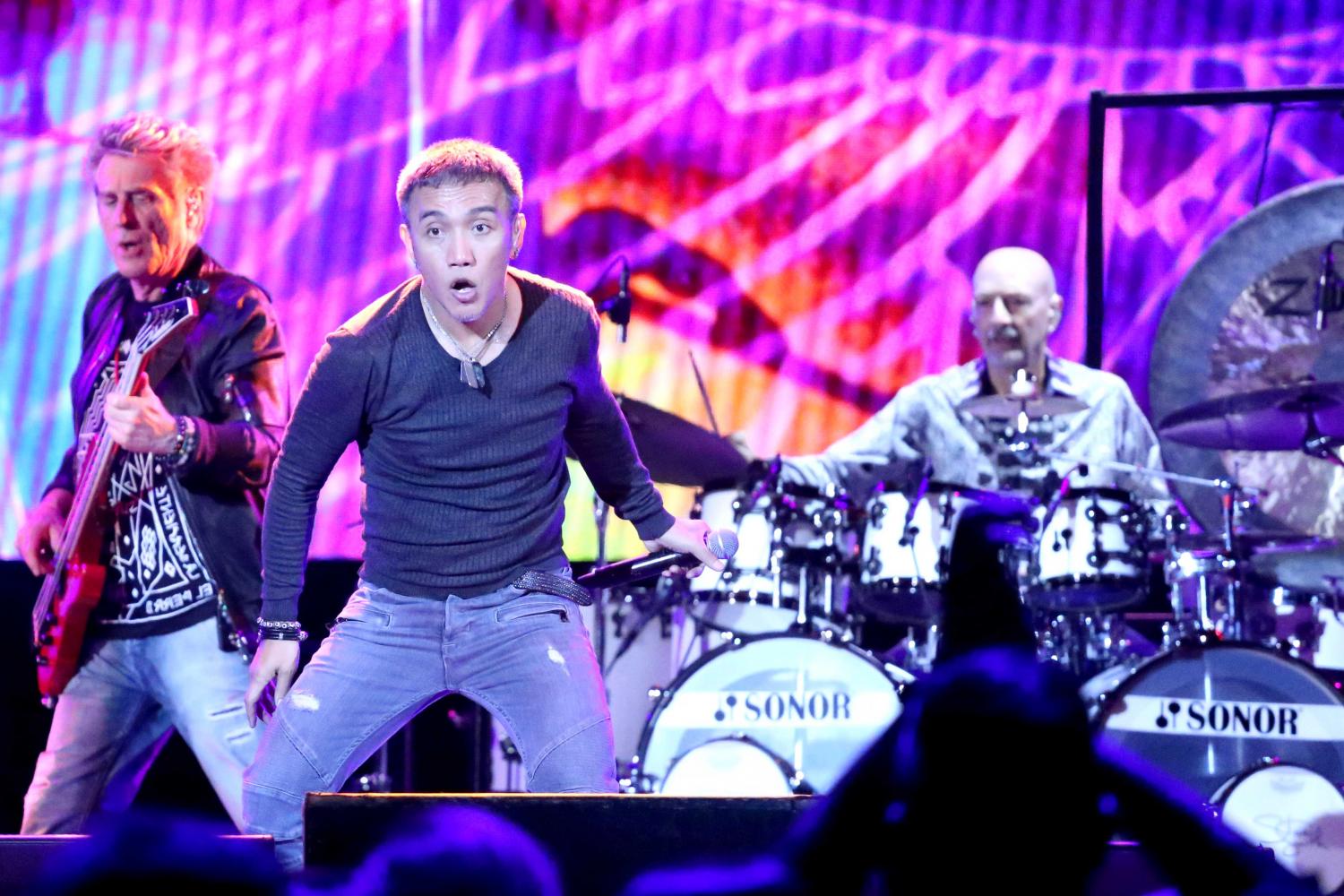 Journey's lead singer Arnel Campaner Pineda performs along with the band at the UTEP Don Haskins Center on Wednesday, July 19.

While many audience members left the Don Haskins Center disappointed because a frustrating three-and-a-half hour delay due to mechanical issues with the band’s plane in Tucson, Ariz., on Wednesday night, Journey finally arrived to a warm welcome from their fans.

The show was supposed to begin at 7:30 p.m., but British supergroup Asia took stage at 8:30 p.m. with their characteristic hard rock and power ballads set.

War anthem “Wildest Dreams” from their first album “Asia” kicked things off with its ominous and spacey synthesizer and an uptempo drum fill that was nicely coordinated with a rapidly paced set of lights.

The melodic, yet heavy “Sole Survivor,” from the same album showcased the vocal talents of the band with vocalist Billy Sherwood and keyboardist Geoff Downes displaying timely coordination between lead and backing vocals. The song also included an interlude, where the spotlight was on Downes as he played the dreamy synth solo.

Toward the end of the set, Asia apologized on behalf of Journey and promised fans that the San Francisco band was on its way. They also dedicated the song “The Smile Has Left Your Eyes” to original lead singer John Wetton, who passed away on Jan. 31 of this year. With Wetton’s photo projected in the backdrop, the band performed the emotional ballad as a tribute.

Perhaps the biggest surprise of their set was Downes taking a crack at MTV’s lack of music in their programming and playing a metal rendition of his song “Video Killed the Radio Star.” Downes originally produced that song when he was part of the new wave duo The Buggles.

To close their setlist, Asia performed “Only Time Will Tell” and “Heat of the Moment,” putting the spotlight on the crowd and inviting them to sing along during the chorus of the encore.

Attendees had to wait until 11 p.m. for Journey to arrive, and they did so with an ominous instrumental intro. The stage was set with a purple, blue and aqua set of lights as the band was received with a standing ovation.  The keyboard melody for “Separate Ways (Worlds Apart)” sent the crowd roaring for an energized performance.

During “Be Good to Yourself,” the backdrop switched to a live video feed of the performance from different angles. This song also gave the spotlight to guitarist Neal Schon, which was a recurring theme throughout the night.

Filipino-born YouTube sensation Arnel Pineda proved why he has been touring with Journey for 10 years now. He was handpicked by Schon as former vocalist Steve Perry’s successor and his vocal likeness to Perry is uncanny. “Ask the Lonely” is one of the most demanding songs for a vocalist in Journey’s repertoire and Pineda’s performance blended seamlessly with the keyboards.

Aside from multiple apologies to the crowd, Schon told the crowd “I want to take you to my city, San Francisco,” and introduced “Lights” with different time lapses of San Francisco as the backdrop. He also encouraged the audience to use their lighters and phones to illuminate the arena.

Keyboardist Jonathan Cain followed “Lights” with a keyboard solo that gave the spotlight to him and his four Roland keyboards. Modern Drummer Hall of Fame member Steve Smith also had his own drum solo. Smith showcased his coordination by hitting the double kick pedals and the hi-hats at a quick tempo.

Cain dedicated the song “Faithfully” to the American Armed Forces in an emotional performance that focused on a soft piano melody and the crowd singing along on vocals.

“Don’t Stop Believin’” closed the show, as confetti was shot up to  the ceiling along with a display of vibrant lights. “Lovin’, Touchin’, Squeezin’” was the encore that capped off the night.