Track and field closes out strong 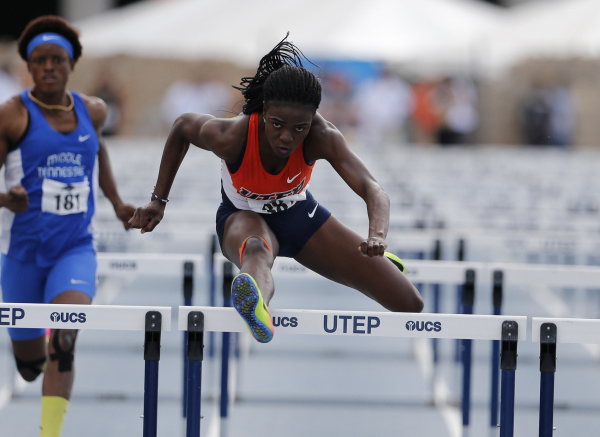 The last time multiple Miners won individual titles at the NCAA Championships in track and field was when Peter Lemashon (800-meter), Michael Musyoki (10,000-meter), Jennifer Smith (shot put), and Ria Stahlman (discus throw) did so in 1978.

Korir finished his freshman season on a high note by winning a second straight NCAA title on Friday, June 9, after winning the 800-meter run indoors earlier this year. Korir ran a 1:45.03 to claim another gold medal,  this time in the outdoor competition.

“He (Korir) is such a talented runner, this may have been his last race for us,” said head coach Mika Laaksonen.

Given his success, Korir could possibly sign a professional contract if the opportunity presents itself.

Running alongside Korir in the 800-meter final was another freshman, Michael Saruni, who tripped and fell during his run, but still managed to finish the race with a time of 2:15.56.

“I don’t know how I tripped. I was in the lead, and then I found myself on the floor,” Saruni said.

Laaksonen felt bad for the freshman runner who was projected to finish second to Korir.

“It was very unfortunate that Michael went down in the 800-meter, it would’ve been a very exciting finish to see who would be the national champion had he not fallen,” Laaksonen said. “Emmanuel should feel very fortunate, Michael would have really challenged him at the end.”

On Wednesday, June 7, in the semifinals of the 800-meter, Korir and Saruni became the first freshmen duo in NCAA history to make the 800-meter final from the same school with each freshman winning their heats and placing in the top three overall. Korir and Saruni were also given All-American honors for their successful freshman campaign.

The 4×400-meter relay team that featured both Korir and Saruni, as well as Asa Guevara and James Bias, struggled in their run on Wednesday. Running just 90 minutes after Korir and Saruni completed the 800-meter semifinal run, the team placed last with a time of 3:18.56.

On the women’s side, Amusan claimed revenge and won the 100-meter hurdles event on Saturday, June 10, after finishing as runner-up to Kentucky’s Jasmine Camacho-Quinn last season. Amusan, who clocked in with her time of 12:57, finished just .01 seconds in front of Quinn (12.58) and won her first NCAA title.

“I’m not lucky when it comes to photo-finish races, so I was pretty scared when I saw her (Quinn) right beside me. But I really worked for this,” Amusan said. “I know I’m way faster between the hurdles, but she (Quinn) is more of a power runner, so I know she uses the ground way better than me, so I had to get off the line faster than her.”

The Nigerian native broke the UTEP school record in the same event earlier this year at the UTEP Springtime event with a time of 12.63. Amusan’s time of 12.57 at the NCAA Championships broke that record and set a new personal best.

“I was way better than last year. Last year I was running a 12.7, and it felt like I was running the fastest race of my life. But now running at a 12.5 feels much easier. My training from last year to this year is way different, and I could see the results,” Amusan said.

“Amusan is another special talent. She executed her race very well and all the hard work she put in this season paid off,” Laaksonen said. “This was her closest race yet and she stepped up to the challenge.”

In the semifinals of the 100-meter hurdles on Thursday, June 8, Amusan set the fastest qualifying time in the whole event winning her heat with a time of 12.79. That beat the likes of Drior Hall from USC and Sasha Wallace from Oregon, who won the 2017 indoor title (60-meter hurdle).

“It’s a dream come true for me,” Amusan said. “I don’t know when yet, but national tryouts are coming up soon.”

Senior Samantha Hall wrapped up her UTEP career on Saturday at the 2017 NCAA Championships by finishing just one place shy of qualifying for the finals of the discus throw. Hall placed 10th with a throw of 54.66-meter (179-4). She is also a two-time Conference-USA champion in the discus throw and garnered All-American second team honors this season for her efforts.

Lucia Mokrasova closed out her junior season on Saturday with a 17th -place finish in the heptathlon with a total of 5,172 points. Mokrasova’s best of the seven-event heptathlon came in the shot put on Friday. The junior heaved the ball out to 13.36-m (43-10) to capture 751 points and place first.

As a team, UTEP finished in a seven-way tie for 21st with Iowa State, San Francisco, Michigan, Miami (FL), Purdue and Arizona with a score of 10. Oregon won the National Championship with a score of 64 to become the first NCAA women’s program to win cross country, indoor and outdoor track and field national titles in the same school year. Georgia finished second with a score of 62.2.