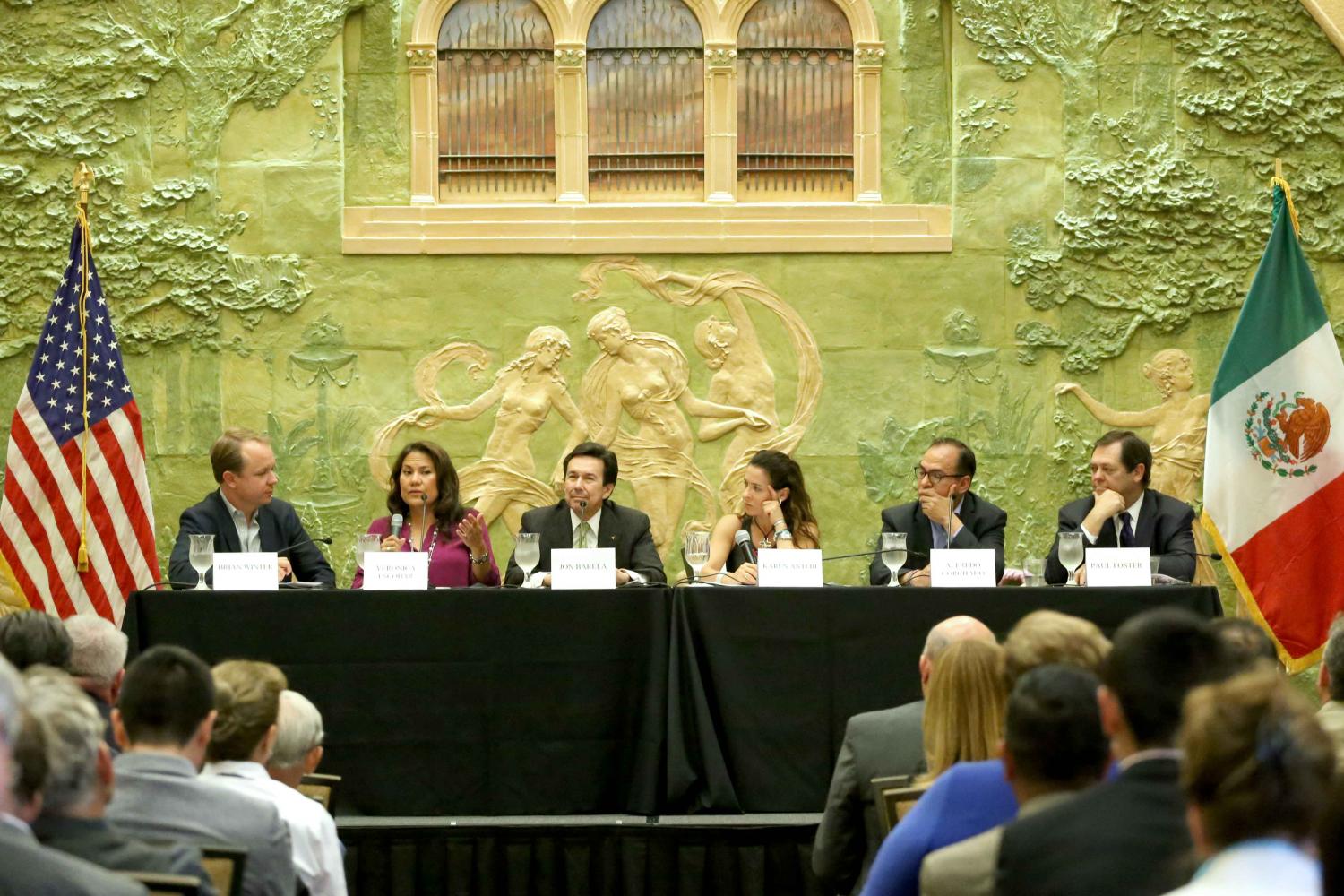 Brian Winter editor-in-chief of Americas Quarterly held a panel discussion on Washington and the Future of the U.S.-Mexico Border at the Mills building on Thursday, June 8.

Independent publication, Americas Quarterly Magazine, hosted a discussion regarding the future of the U.S.-Mexico Border on Thursday, June 8, at the Mills Building in downtown El Paso. The panel of experts included Economic Counselor for the Embassy of Mexico Karen Antebi, CEO of the Borderplex Alliance Jon Barela, journalist Alfredo Corchado, El Paso County Judge Veronica Escobar and Western Refining, Inc. Founder Paul Foster. The magazine’s Editor-in-Chief Brian Winter, served as the moderator of the discussion and started the session with a guided segment and later allowed for the audience’s questions for the panel.

Winter explained the discussion’s purpose and importance to the region.

“These are important issues that touch on a lot of people’s lives, their economic lives, and I hope we can send out everyone here today with a better understanding of not only what is happening in these communities, but also in Washington and Mexico City,” Winter said.

In terms of the scope of the discussion, Winter asked the panel what they thought was the biggest misconception among Americans about the border locality. Judge Escobar responded with an example at the state level, when former Texas Governor Rick Perry mentioned the occurrence of bombs going off in El Paso during a presidential debate.

“The challenge for us is not only fighting those misconceptions, but even when you have corrected the record, even when you describe to other folks in other parts of the country that the border is safe and that it is a place of opportunity and that our relationship with Mexico is extremely positive, many times they are unwilling to accept the facts,” Escobar said. ”That has been very troubling and very challenging.”

Antebi seemed more optimistic about the question, highlighting the production of goods and the benefits of trade agreements such as the North American Free Trade Agreement (NAFTA).

“The way the border cities of Ciudad Juárez and El Paso interact to produce goods or world markets is remarkable,” Antebi said.

For Barela, the aspect of border security seems to be an issue that is poorly and inaccurately perceived.

“The number one misconception is that the border is a lawless, violent region,” Barela said.

When the question of the renegotiation of NAFTA arose, the panel seemed to be on the same page and agreed that the benefits of the treaty outweighed the possible drawbacks.

“There are 14 million jobs that depend on North American trade,” Antebi said.
Foster called for a supportive and more vocal approach on what the private sector of the business community can do to figure out a solution to the immigration and integration issues in the country.

Antebi also called for unification in the message for a better renegotiation in the treaty.

“We can organize ourselves well enough to be present and offer a unified message and a significant one from other communities across the border and we maybe not change the outcome, the outcome may already be pre-scripted, but it is important to let the country know what those of us who are on the frontline believe the best outcome for NAFTA 2.0 will be,” Antebi said.

The event concluded with a reception where the audience was invited to continue the conversation with food and drinks.
For more information on the Americas Quarterly Magazine, visit http://www.americasquarterly.org/