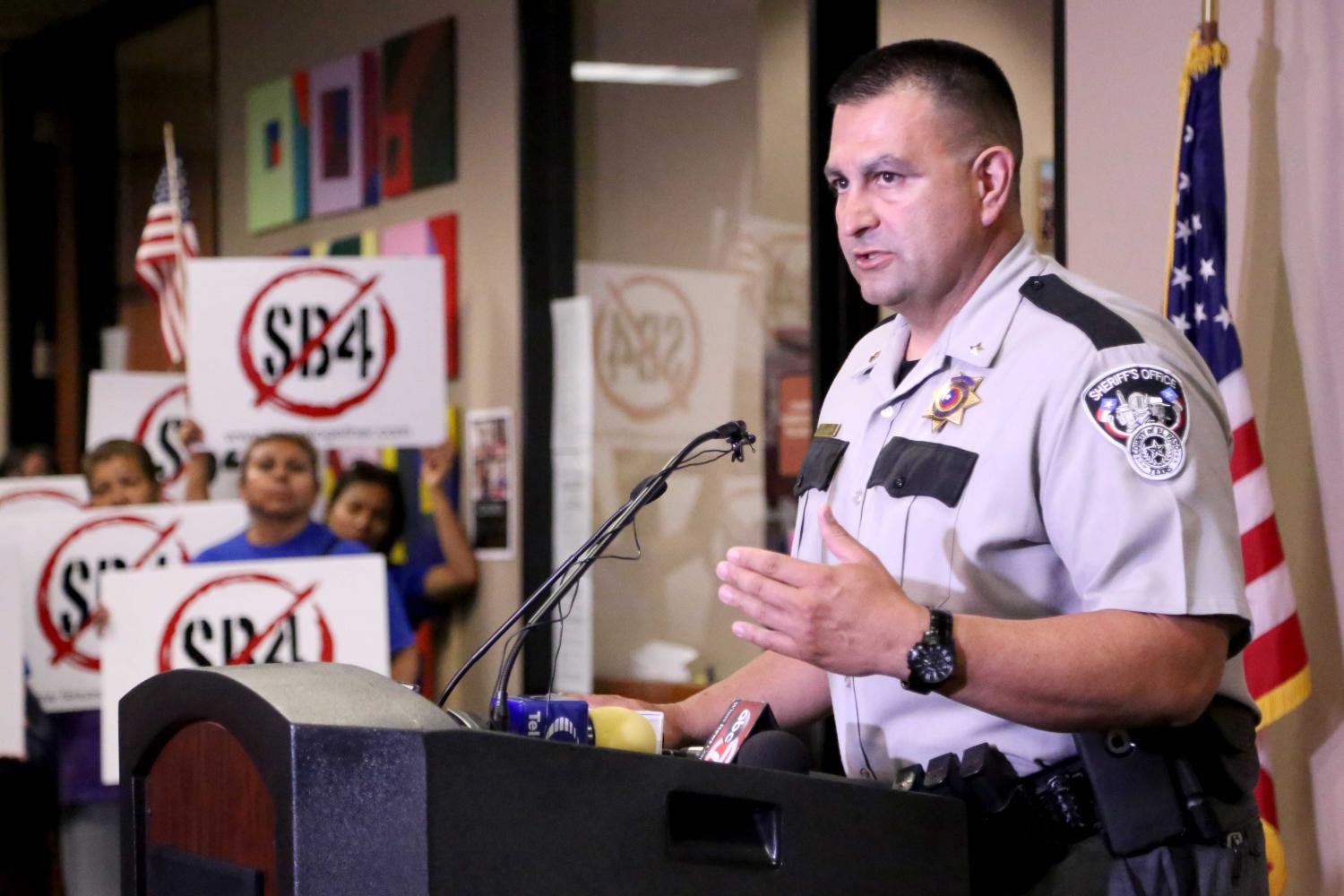 Commander Robert Flores spoke on behalf of sheriff Richard Wiles in support of the lawsuit.

El Paso County, El Paso County Sheriff Richard Wiles and the Texas Organizing Project filed a civil suit against the State of Texas, Texas Governor Greg Abbott, Texas Attorney General Ken Paxton and Texas Department of Public Safety Director Steve McGraw on Monday afternoon. The lawsuit objecting to Senate Bill 4 (SB4), also known as the “show me your papers” bill, was filed in San Antonio, Texas, by law firm Garza Golando Moran PLLC. The lawsuit holds that the bill “violates the Constitution of the United States, the Texas Constitution and federal law, and should be immediately and permanently enjoined.”

“SB4 is a discriminatory law that actually impedes public safety, doesn’t enhance public safety,” Garza said. “In the lawsuit that we filed today, we point out the unique character of El Paso County and why its involvement in this case is so important.”

The law is set to shift the focus on the approach to local law enforcement and immigration policies by federalizing them. For the plaintiffs, this is especially important because the autonomy of exercising policy at a local level is one of the elements at stake with the implementation of this bill.

“This law has the potential of undermining public safety, the authority of local jurisdictions to set policies for their own communities,” Garza said. “They are in the best position to know based on characteristics and interactions they have with their residents about how best to police their community. This law takes that discretion and policy decisions out of the hands of local officials.”

Garza also said the bill has the aspect of population targeting, given that El Paso is a predominantly Hispanic community.

“This law is just another version of a continuing attack on the immigrant community from Austin,” Garza said. “Many of you may already know that voter ID laws, redistricting laws have been found to be discriminatory, but intended to discriminate against the Hispanic community and SB4 follows in that line.”

This lawsuit joins two others in the western district of Texas, San Antonio division. The first one was filed by the League of United Latin American Citizens (LULAC) in San Antonio for the border community of El Cenizo, Texas. The other is a preemptive lawsuit filed by the Texas attorney general and the governor against jurisdictions in the city of Austin, Travis county and the Mexican American Legal Defense and Education Fund.

When the floor was opened for questions, an attendee asked why the plaintiffs decided to file a separate suit as opposed to joining the LULAC one in San Antonio. “Our claims are unique, are different because of the unique nature of El Paso County and the way it serves its population,” Garza replied.

The audience also asked how much the lawsuit would cost to taxpayers, and there was no definitive response. While Garza mentioned the existence of an estimated budget, he could only provide an estimate of about $125,000 to $150,000 without giving a concrete figure. He also assured the audience about the validity of the case and the state’s responsibility for reimbursing legal fees.

El Paso County Sheriff’s Office Commander Robert Flores spoke on behalf of the sheriff’s office in disapproval of the bill. “We believe this bill doesn’t make the communities any safer,” Flores said. “By forcing local law enforcement to act as immigration officers, it really puts a lot more pressure on our resources to maintain law enforcement within our community.”

For more information on the lawsuit you can visit http://www.epcounty.com/CA