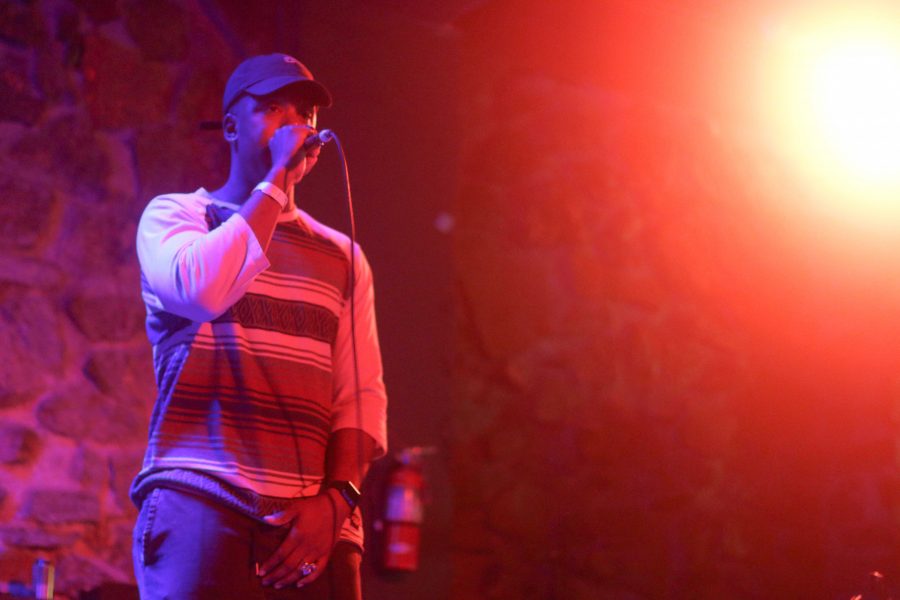 Hip-Hop artist The Fifth Estate performs at the Lowbrow in his first headlining show on Friday, April 14.

The Fifth Estate, commonly known as Fifth, is making his way onto El Paso’s hip-hop scene. Fifth kicked off his path to fame by headlining his first show at the Lowbrow Palace on Friday, April 14.

Myke Joyner, 25, grew up as a military brat and came to El Paso four years ago. Joyner has been making music for most of his life, playing trumpet and guitar when he was younger. It wasn’t until high school that one of his best friends introduced him to the rap scene.

“I used to play around with (rap), but it wasn’t until I turned 18 that I started to take it more seriously,” Joyner said.

Joyner found the name Fifth Estate as a suitable name, when thinking about the structure of social classes.

Before the French Revolution, France separated society into three estates. Clergy was the first estate. The second estate was nobility and the third estate was common people. The fourth estate is the media. This structure continues in modern U.S. society.

“The fifth estate is also like the news, but it’s the raw truth and less opinionated,” Fifth said. “When I say the fifth and the third it means I’m the voice of reason.”

Around five months prior to his Lowbrow debut, Fifth began to view his hip-hop career with a new perspective.

“I realized I had always had passion for music and I was finding ways to eat, sleep and travel off of it,” Fifth said. “If I get superstardom off of it that’s tight, but I just want to be able to provide for myself and experience things. The things I’ve experienced through music and meeting people are unlike anything I’ve ever done.”

Fifth played at The Lowbrow with local artists such as the Swell Kids and singer songwriter Elia Esparza. Fifth walked on stage to the beats of El Paso DJ One Man Jazz, who Fifth said he felt honored to work with.

When Fifth first moved to El Paso four years ago, he was hungry to get out and see what music scenes existed here.

“It was really kind of hard to find a hip-hop scene because there are a lot of variations of it,” Fifth explained. “You have your guys who are definitively ‘90s boom bap. You have your guys like the Rare Individuals, who are more modern. There’s a whole mixture out there.”

Fifth says the music scene in El Paso is not talked about by the average El Pasoan, but they should recognize what’s going on in their hometown.

“I really do believe there’s world-class talent here, from some of the hardcore bands here to some of the hip-hop acts to some of the singers. The scene has done a lot of growing in the last year, I mean that in all accounts,” Fifth said. “Even the local venues here like Prickly Elder and Dream Chasers Club. I’ve seen a lot of more progressive, forward-thinking efforts come out lately and I think it’s going to benefit all of us.”

Fifth says 19-year-old El Paso artists Evander Griiim and Khalid have inspired him by taking their newfound fame out of El Paso and bringing it home when they can. He says now is the time for artists to capitalize on the attention they’re bringing to El Paso.

“Personally speaking, I think there’s a lot to be said for your age. I don’t think it’s everything, but it is commendable. In this day and age, everybody is on Instagram and Twitter putting stuff out there. They’re not just doing one thing, they’re making waves,” Fifth said. “For Khalid to be on a global level and do the things he’s doing, you can’t help but be inspired by that.”

Fifth considers himself a hip-hop artist at the core, but likes that he has room to move around.

“I’m still growing my name here so it’s exciting to pull out any card from my deck to show people,” Fifth said.“Nineties hip-hop molded me, but I think it’s all about balance. I’d say I’m somewhere in between what’s going on today and the sounds of yesterday.”

Fifth says he’s always been inspired by Andre 3000 of hip-hop duo Outkast and anyone who is a true lyricist and storyteller such as Slug from Atmosphere or Idea. Fifth enjoys being able to write stories and show transparency through his songs about life experiences he’s had.

One of his songs, “Melancholy Rose,” is the story about a breakup he went through.

“The song is saying, ‘yeah stuff happens, love can suck, but it’s also really tight,’ so there’s that duality in the song. It starts in a sad place but goes into how it’s going to be cool,” Fifth said.

Although starting off as a hip-hop purest, only focusing on lyrics and bars with straightforward head-bopping beats, Fifth has started to incorporate more instruments into his songs. He tries to find a balance between having an impactful message and sound.

“There’s a time and place for everything; for rappers like Future and Lil Yachty and Young Thug and there’s a place for your super conscious heads,” Fifth explained. “I deliberately try to find myself somewhere in the middle. During live performances I want people to hear what I’m saying and also feel something physically that they move with it.”

Fifth says once you achieve those three things as an artist is when you start gaining traction and heading in the right direction.

“I can spit the dopest rhymes of all time, but it doesn’t do anything if people don’t want to actually vibe to it on a deeper level,” Fifth said.

“I feel like local artists definitely have support. People who aren’t average showgoers, say ‘oh it’s just some sound cloud rapper, some guy that thinks he’s Kendrick Lamar,’” Fifth said. “Everyone is opinionated, but when you have artists come out of here, hopefully people wake up and realize we’re more than a few talented people.”

Fifth says he tries to learn as much as possible from artists at his own level and higher up to incorporate into his own work.

“My self motto is, ‘the limits that you have are the limits you place upon yourself,’ so you’re only going to go as far as you push yourself,” Fifth said. “So I’m like, I can improve on anything. I’m not the tightest or amongst the top five on anybody’s list, so I need to keep going and search for that number one spot and whether I get there or not, it’s always a pursuit.”

All Fifth wants is for people to connect with his music. He says he tries to add a personal touch to everything he does.

“If you don’t resonate with it now, it might be 10 years from now, but you’re going to get it,” he said.

The Fifth Estate’s music may be found on Soundcloud and Spotify.