‘Anything Goes’ slows down in the second act 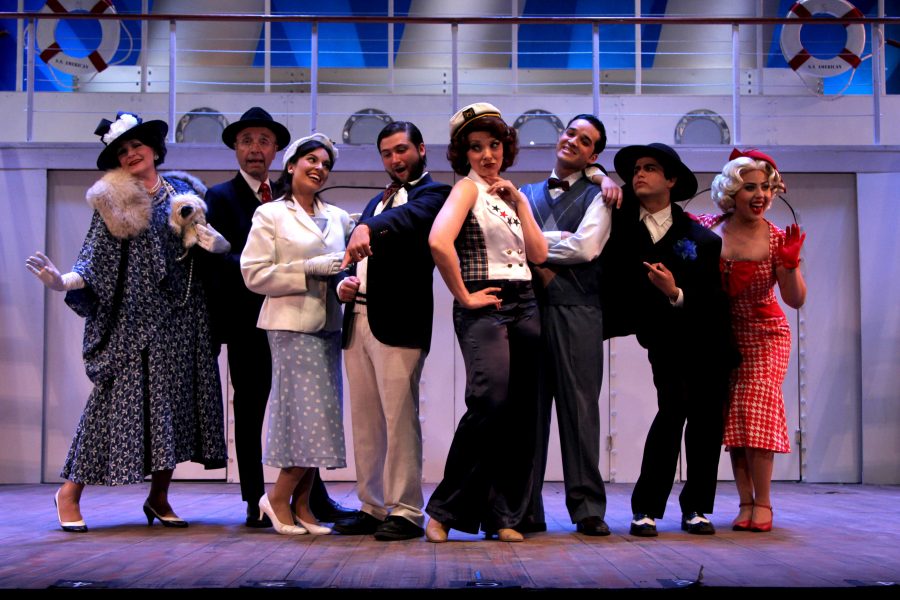 ‘Anything Goes’ will be playing at the UTEP Dinner Theatre until May 7.

The latest UTEP Dinner Theatre production of “Anything Goes” is a bright and charming musical about dreams aboard an ocean liner. However, a rushed second act that seems to disregard storytelling at times can leave the audience feeling lost at sea.

Originally written in 1934, with music and lyrics by composer Cole Porter, “Anything Goes” takes place during the Great Depression. The musical tells the story of Billy Crocker, a young Wall Street stockbroker played by freshman theater major Jorge Blakely, who is in love with Hope Harcourt—played by sophomore theater major Nichole Hardgrove. Crocker follows Harcourt to a New York-London cruise, just to find out she is getting married to British millionaire Lord Evelyn Oakleigh—played by sophomore theater major Jared Berry.

The ship is also host to second-rate criminal Moonface Martin, played by freshman theater major Alvaro Callejas. Martin brings mischief aboard while disguised as a minister, and ultimately becomes Crocker’s main aid in his quest to impede Harcourt’s wedding and win her and her mother over.

However, evangelist turned nightclub singer Reno Sweeney—played by doctoral student of teaching, learning and culture, Josey Mitchell—is the star of the show.

For starters, in the opening musical number, “I Get a Kick Out of You,” Sweeney reveals her feelings for Crocker, showcasing great vocal talent.

Mitchell’s stage presence is unmatched during this production, and the chemistry she brings to stage helps other characters flourish. For example, during “You’re the Top,” Mitchell’s years of theater experience were telling as she commanded the segment and seemed perfectly comfortable guiding Blakely along while displaying great chemistry.

The musical also makes use of great side characters in Eli Whitney, played by Norman Lewis, and Erma, played by senior English major Lauren Peña.

Lewis portrays a perpetually drunk character that ironically seems the most sober of all once it is all said and done, while Peña’s character has an interesting arch regarding her sexuality, even if it ultimately doesn’t fully develop.

Technically, the production is sound. The backdrop resembles the deck of the ship while also shifting to the inside of the suites and the bar. It manages to keep a minimalistic style and never detracts from the action on stage.

In terms of sound, the lines were always loud and clear. However, during “I Get a Kick Out of You,” the music overshadows Mitchell’s voice.

When it comes to lighting, the production team kept a simple approach with little variation to the acting segments. However, during “It’s De-lovely,” the projecting of Crocker and Harcourt’s shadows on the backdrop served as nice symbolism foreshadowing the fate of the two characters.

Despite some interesting musical numbers, the second act feels like a disjointed series of vignettes. The script seemingly tries to wrap up all of the character subplots and does so in a way that feels rushed, and to an extent, awkward. This is evidenced by the ending, which plays on Chinese stereotypes and feels tacky even in dialogue.

The ending makes use of Luke and John—two characters whose only purpose throughout was to serve as comedic relief—as crucial to the play’s ending by lending their outfits to Martin and Crocker. They fake a Chinese accent to break off Harcourt’s wedding and the musical then abruptly ends

Director Justin Lucero and the cast made the decision to follow through with this creative element.

“After considering many alternatives, the cast and I decided to embrace the intent and message when necessary, offering this touchy aspect of the show as a moment for audience discussion and reflection,” Lucero said as part of his director’s notes.

While the energy and commitment to the characters shows serious effort, a product-of-its-time script and a rushed second act holds “Anything Goes” back from being a memorable performance.