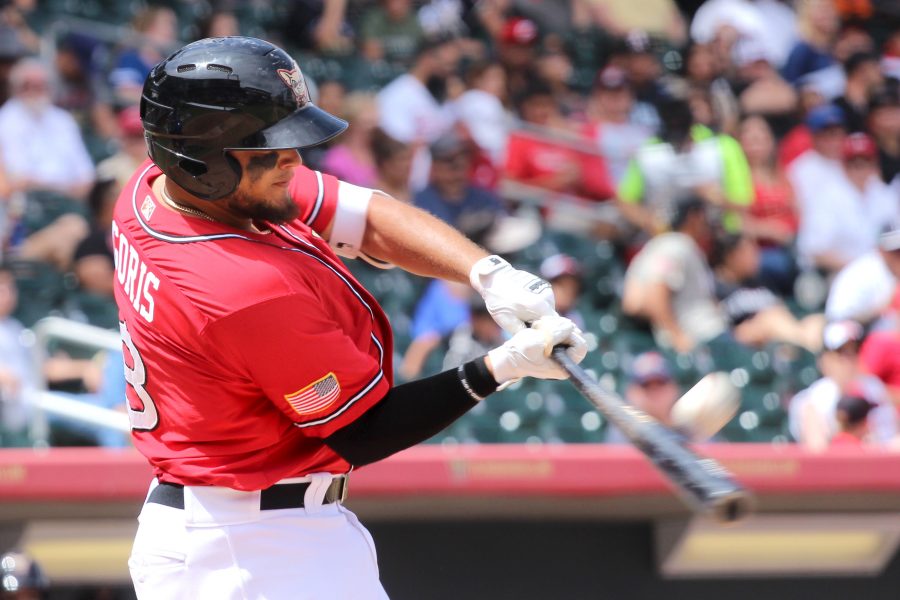 Chihuahuas pitcher Dinelson Lamet shut out the Las Vegas 51’s through five innings on the mound and picked up his first Triple-A victory as the Chihuahuas overcame the 51s 7-2 on Sunday afternoon.

“Lamet is dominant; he’s got dominating stuff on the mound. The way he was going at guys today attacking them, he was not afraid up there today. It was impressive. He made guys uncomfortable. His performance is what we expect of him because he is that good,” said El Paso manager Rod Barajas.

In front of a crowd of 7,642, Lamet was lent a helping hand by his batters. The Chihuahuas blasted three home runs over the wall, connected for nine hits on the day and earned their third win of the season.

“Offensively we are taking advantage of the elements. I like the aggressiveness on the bases and hitting. We were aggressive all around and we were able to score some runs today,” Barajas said.

During the top of the second inning, Las Vegas runners were threatening on first and second for Lamet with only one out. Lamet answered by getting Desmond Jennings to ground out into a double play to end the inning.

That was as close as the 51’s got to scoring a run on the 25-year-old Chihuahuas pitcher in his 5.1 innings pitched.

In the bottom of the second inning, the Chihuahuas jumped out to an early lead on the 51s. El Paso’s starting first baseman Jamie Romak hit a home run to get his team on the scoreboard first. It was his third home run in the last two games.

Three batters later in the same inning, catcher Rocky Gale contributed with a RBI single. The lead grew 2-0 in favor of the home team.

After five innings of play, the Chihuahuas grew themselves a lead of 4-0 due to right fielder Collin Cowgill knocking his team’s second home run of the game in the fourth and Romak’s double in the the fifth inning, which brought the fourth score across the plate.

“We are following our pitchers’ lead. Our bullpen has been solid and we’ve been hitting well. So far it’s been a great team effort,” Cowgill said. “You always want to get ahead early. If we can get our pitchers a lead early it gives them more confidence. They (the 51s) got a couple late there, but we fortunately put up enough early in the game.”

In the first four games of the season, Romak has the most hits on the team with seven.

“He’s (Romak) a veteran. He knows how to handle pitchers. If they (opposing pitchers) make mistakes, Romak makes them pay. That’s what I was looking for—him being the middle man in the lineup and was asked to hit for us. In this first series, Romak has helped us win these games,” Barajas said.

However, things got interesting when the Chihuahuas reliever Kevin Quackenbush was asked to come in and close the game in the eighth inning. The 51s marched a comeback.

Quackenbush’s first battle ended in a home run for the pinch hitter of the 51’s, Josh Rodriguez, and the heartbeat of the 51s was visible for the first time during the game.

Then, starting third baseman Matt Reynolds had an impressive hit, which was followed by two more for the 51’s. Las Vegas cut the deficit 4-2.

Base runners for the 51s were on first and third with only one out and with momentum teetering.

In a play that could be the defensive stand of the game, Quackenbush got Taijeron to hit on a pitch that turned into a double play and an escape for the Chihuahuas from the inning. The score remained a two margin game.

But in the bottom of the eighth, El Paso spoiled the 51s comeback thoughts with a three-run response. The Chihuahuas third baseman Cory Spangenberg hit his unit’s third home run of the game to lead off the eighth and jump-started the largest scoring inning for the home team.

Dusty Coleman and Rocky Gale both added runs for the team during the inning.

Last season, it took the first 10 games of the year for the Chihuahuas to retrieve their third win. This season, El Paso has done it in four games and with a 1.50 overall ERA so far.

“The way the pitching staff as a whole has performed has been outstanding. I felt this year it was going to be our strength and it has been in these four games so far. They’ve been dominant and doing everything they need to do to be successful,” Barajas said. “These group of guys are more experienced that we had last year.”

The last game of the series between the Chihuahuas and 51s is tomorrow at 11:05 a.m.