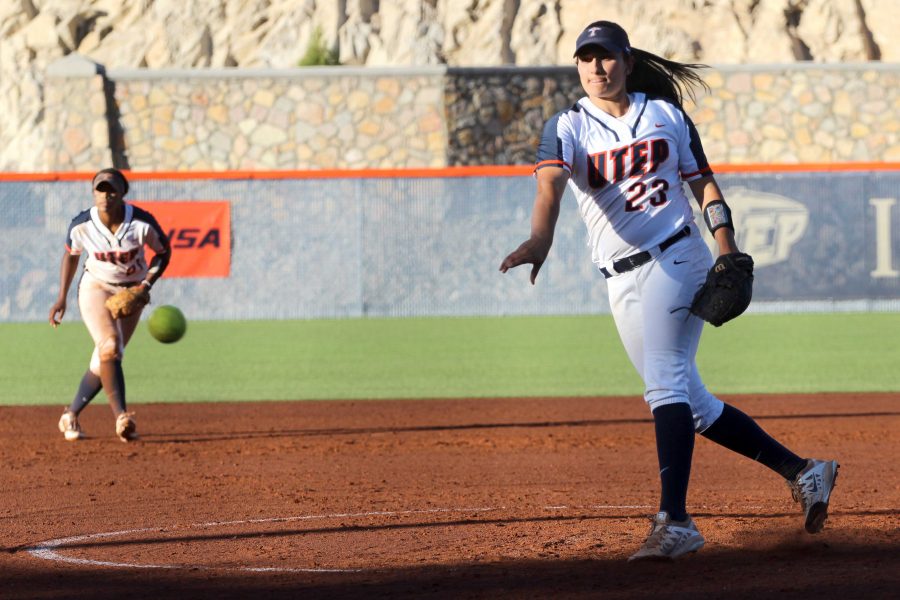 On Saturday, April 8, the UTEP softball team and Western Kentucky split the two-game Saturday series at Helen of Troy Field. The Miners banked on reliable pitching in the earlier game, but could not find the same groove in the following contest.

The orange and blue were victorious in game one, 10-2, but the Hilltoppers quickly earned revenge with the 18-8 triumph.

Now, both teams sit tied at 5-9 in Conference USA action, which puts Sunday’s third and decisive game with that much more on the line as both units fight for their playoff lives. In C-USA the top eight teams earn a bid in the tournament that starts May 10.

In game one, UTEP starting pitcher, Kaitlin Fifield, threw a complete six-inning game, while only allowing two runs in the third inning on five hits total. Fifield’s bullpen backed her up on the offensive side of the spectrum with 12 hits and them scoring in every inning except for the fifth inning.

“Kaitlin threw a great first game. She kept them (WKU) off-balance, we got some great defensive plays and we had some pretty key hits in that one,” said UTEP head coach Tobin Echo-Hawk. “She did a great job keeping WKU off the bases, and even when she got herself in a couple of jams she did a nice job of working out of it. That’s something we haven’t been able to do.”

Fifield (2-5) out battled WKU’s two pitchers, the starter Kathryn Downing (11-8) and her relief Kelsey Aikey in the 3 p.m. matchup. Both of the pitchers for the visitors gave up six hits apiece, and saw three UTEP hitters, Taylor Sargent (3-4), Mallorie Cross (3-4) and Kiki Pepi (2-4) each earn multiple hits.

“I hit the spots today and trusted my defense. The goal is to always help my defense out,” said Fifield. “I personally need to do better on the walks, I need to set the tone right away. If I do that it will help my defense with the balls that they need to get outs.”

UTEP grabbed the lead early in the first inning, 3-0, and never looked back. The Miners started off the game with three runs and ended it with three runs, as well, after Baber singled in the sixth inning with two outs to put the Miners up by eight runs, which earned them the mercy rule victory.

After the intermission, UTEP was let down by their pitching unit in the second game as the Miners allowed a season-high in runs scored by their opponents; WKU scored 18 runs and embarrassed the home team by 10 when it was all said and done.

The visiting WKU squad sent 12 batters up to the plate in the first inning with five of them recording hits and four batters receiving walks, which resulted in eight runs before the Miners’ defense could finally put together the first three outs of the ball game.

WKU was on cruise control from there on out and rode past UTEP 18-8 during the second game of the Saturday series.

Coming into the series, the Hilltoppers ranked dead last in C-USA in batting average (.202) and 285 in the nation, but put up 13 hits. On the other hand, WKU also walked into the matchup No. 1 in the conference for homerun knocks—and they held up their reputation in game two, as they hit blasted five balls over the fence against the Miners’ defense.

The team in red and black forced UTEP to go through four pitchers in the five-inning game to try and figure out how to slow down the WKU batting lineup.

Echo-Hawk went with the veteran senior pitcher Taylor Grohmann to start off the game, but after only five batters in and a 3-0 hole for the Miners, Grohmann was pulled for the redshirt freshman pitcher Devyn Cretz. Grohmann finished her day allowing four hits, one walk and five earned runs under her name—all without getting one out.

Cretz then walked her first batter, which loaded the bases, and eventually the Hilltoppers ended up scoring four runs on the freshmen in one inning at the square. It was 9-2 when the El Paso-native Erika Harrawood took over the pitching duties at the top of the second inning with no outs.

Harrawood was on the mound for 3.1 innings before getting her number called for the freshmen Allie Johnson. Harrawood gave up five hits, two walks and allowed five runs on 19 batters faced.

In total, the Miners found themselves on the defensive end for the majority of the matchup. The Hilltoppers pitcher Haylee Towers (6-10) threw under 100 pitches (99 total) to receiver her sixth victory of the season, compared to 182 combined pitches thrown from UTEP’s pitching staff.

“Pitching has been inconsistent all year. We need all of our pitches to step up and keep us in games; they didn’t do that in the second game,” Echo-Hawk said.

It was not the hitting that brought UTEP down. In both games combined, the Miners recorded 21 hits (nine in game two) and saw 18 runners cross the plate on the day’s work.

During the second contest, six out of the nine batters in the lineup for UTEP added a hit on their season total; Sargent (2-3), the right fielder Pamala Baber (2-3) and the center fielder for UTEP Ariel Blair (2-2) all totaled two hits each in the 5 p.m. match.

“I saw the ball well today and stayed relaxed up there. I’ve been telling myself to want it more every game,” said Sargent. “The second game, they just hit the ball really well, but tomorrow I think we are hopefully going to pounce on them (WKU). The first game is who we really are.”

Game three is set April 9, at 11 a.m. where the Miners will face WKU for the series victory.