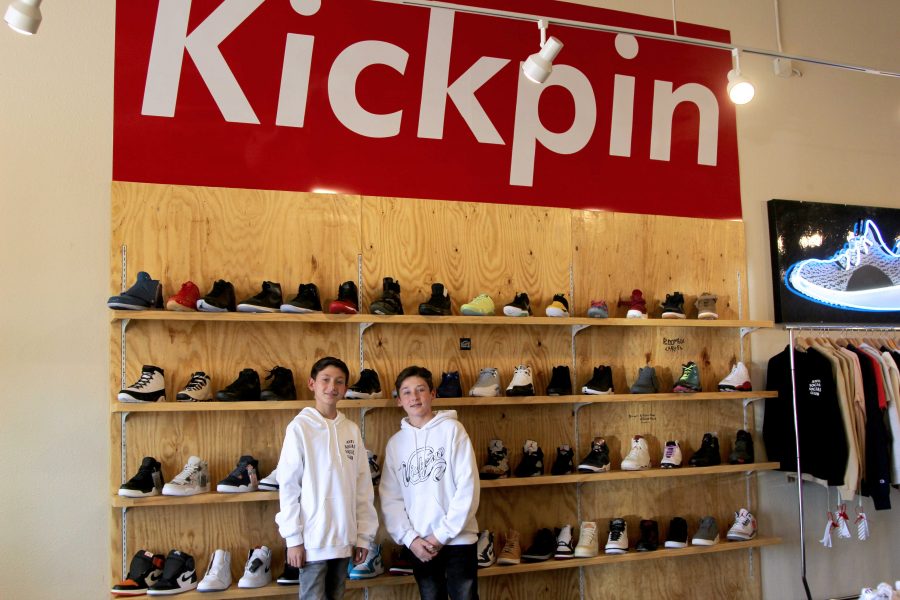 Most middle school kids are satisfied with making their school basketball team, getting their braces off or having the freedom to go to the movies unsupervised with their friends.

For Drew and Jaime Frank, who are 13 and 12 years old, respectively, they are satisfied with the booming business of their recently opened sneaker store, Kickpin. Both brothers buy and sell high-quality and high-demand sneakers that are nearly impossible to find.

Located at 5860 N. Mesa, Suite 112, Kickpin is a boutique dedicated to selling limited quantities of shoes from Adidas, Nike, Jordan and other brands. They sell them above the retail market price because of their high demand and exclusivity.

Some of the high-demand sneakers they showcase are Yeezy, Jordan Retro, Adidas Ultraboost, New Balance and Nike Air Max.

The store is open on the weekend with different hours during the day. They opened their doors in late 2016 and have been up and running since.

“It’s been crazy. My brother and I always had a love for sneakers and clothing so one day we decided, ‘why not open up a shop and do it here?’” Drew said. “We always used to resell to other stores in Los Angeles, but we thought we could bring it here and see how it goes. It’s just been amazing how crazy it’s been.”

Both brothers said the lines before pop-up events can stretch down the block and that the demand for the latest sneakers are at an all-time high.

“It’s been crazy; they love it here,” Drew said. “It’s a little surprising because I never knew there would be such a big sneaker culture here. I didn’t think there’d be any culture for any of this stuff.”

The process to buy high-demand shoes is almost impossible and it can be regarded as a talent. For example, if the Yeezy Boost shoes went on sale, Adidas would only release a small quantity of the shoes online and they generally sell out in minutes. Most who buy online use special computer software to properly add the items to their carts and get the limited edition shoes.

The Frank brothers didn’t disclose how they get their shoes, but they did say it takes knowing the right person to buy from.

“We know a lot of people who sell them and we buy in bulk and separately sometimes,” Drew said. “To have something like our store, you really have to have a lot of inventory.”

That’s precisely what the Frank brothers have—a back room with hundreds of these high-demand shoes.  Also in the boutique are special clothes, accessories and even a DJ booth. For those who want to take a chance on winning shoes, they even have an arcade-like game setup, where customers can win a free pair of sneakers.

For the future, the Frank brothers definitely want to continue to grow their business by opening up a website and possibly a new location.

“We’re about to launch our website soon, where we will sell some of our stuff,” Drew said.  “Also we’re going to be doing a lot of different things in El Paso. Maybe eventually open up another store in El Paso. We’re going to be having a pop-up at Neon Desert too. It’s going to be crazy.”

And the brothers do not simply blabber about their success. They have become regionally recognized by some of the top artists when they come through El Paso. In fact, when Carnage came through to El Paso, the DJ wanted to make a stop at the store to do a meet and greet.

“Carnage was with J&K for Rare and he wanted to do a pop-up and we said, ‘why don’t you do it here?’” Drew said. “Lil Yachty came with him so he also was here. Khalid came the next day, just coming through and it was so cool. He’s a really nice guy.”

Also, the brothers have different classmates who come out every chance they have and often talk about the store at school.

“I like it a lot because most of my friends come in a lot and it’s so fun to talk about,” Jaime said. “People love it here and they think it’s so cool that we’re so young doing it here.”

The two, who evidently have a keen eye for a person’s shoe game, are currently all about Kanye West’s Yeezy sneakers. Jaime actually owns every Yeezy shoe that has been released.

“I just like how rare they are and getting them. I mean it’s Kanye,” Jaime said. “Currently my favorite shoes are the Zebra Yeezys.”

As they grow up, the brothers have a goal to keep the store and continue selling shoes.

For young teenagers, Drew and Jaime do not let their age affect their quality or product of work.

“No matter how young you are, if you dedicate yourself you can do it,” Drew said. “We’re 13 and 12 and we run a sneaker store so it’s possible.”