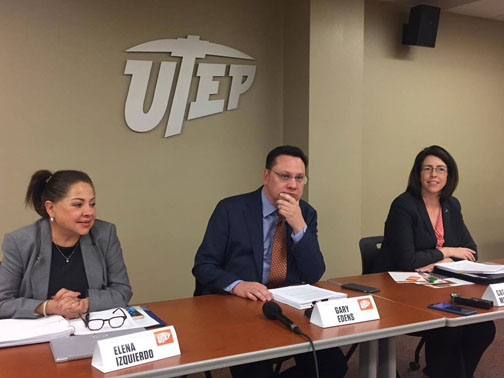 The University of Texas System released a system-wide survey focused on sexual assault and misconduct on Friday, March 24. The survey, Cultivating Learning and Safe Environments, or CLASE, consisted of 3,012 UTEP students, and more than 28,000 students across 13 out of 14 UT institutions, UT Health Northeast did not have enough students to ensure anonymity in the study.

One major find was that 70 percent of victims first reported an incident during this survey, and only 11 percent reported to someone at UTEP. Eighty-eight percent  of unwanted sexual contact incidents at UTEP happened off-campus.

“These types of incidents are the most underreported types of situations anywhere. That’s not unique to a college campus, that’s anywhere, but we want folks to come forward and share with us what is happening,” said Catie McCorry-Andalis, UTEP’s dean of students. “Even if it is happening off campus, because we can provide them access to resources that are both on campus and off campus and support them for whatever has happened.”

Student-perpetrated sexual harassment was at 20 percent, those who identify as LGBT had a higher level at 31 to 33 percent.

“The information received is aligned with what is nationally recorded, so there are no outliers at all,” McCorry-Andalis said. “But the approach we are taking at UTEP is (that) one (incident) is one too many, so we want to address everything as best we can. But we really want to make sure that folks come forward and share what’s happened.”

Since the survey Was just released, UTEP is still looking at what can be done. But some of the immediate actions are to enhance ways that students can notify UTEP staff about sexual harassment that might take the form of electronic applications. Other efforts include increasing the amount of resources available and trainings as well as education on healthy relationships.

The survey focused on incidents after students have enrolled at UTEP and has a margin of error of 2 percent. Meaning that any percentage could actually be two percent higher or lower.