A ‘New Era’ of lucha libre dawns in El Paso 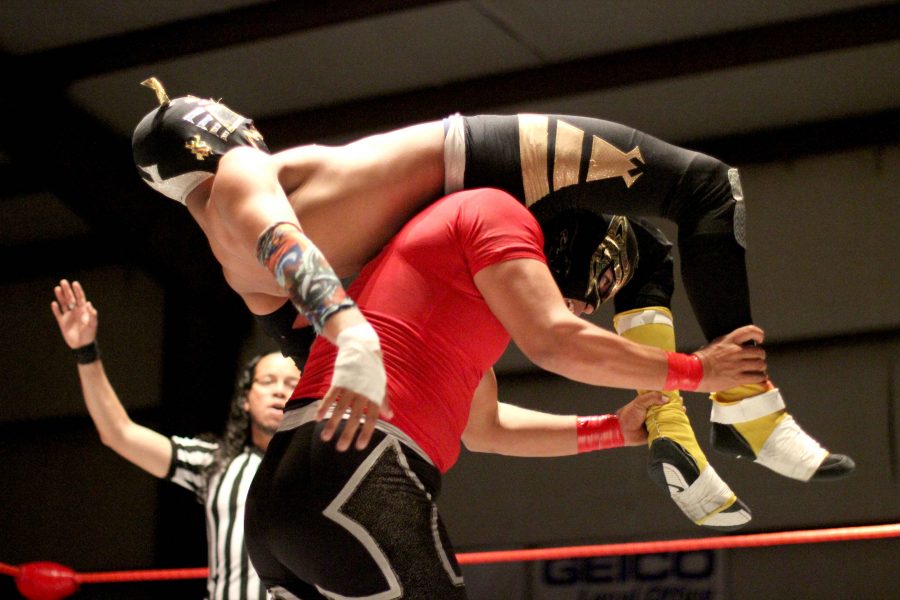 As the city winds down from the week on a Friday night, a whole new community emerges from a shabby warehouse on Dyer Street.

New Era Wrestling, a local El Paso Lucha Libre organization, opens their doors every Friday night to hundreds of people of all ages to put on a full lineup of wrestling matches and entertainment.

When entering the arena for the Friday matchups, immediately a wave of intense energy hits as hundreds of children and adults are scattered around the wrestling ring.

All of this energy builds up until the emcee calls for the first match. As the different wrestlers come out, all of the children inch close to the walkway and cheer ecstatically for each wrestler. They know every name, every move and they let the whole stadium know as each wrestler comes out to the ring.

There’s high intensity, minimal gruesome violence and impressive athleticism by the wrestlers. As they perform, the entire crowd hones in on every detail, cheering for their favorite wrestler to win.

Although the idea of watching Lucha Libre sounds comical and even quirky to some, New Era Wrestling never fails to pack a full house on any given Friday night and has completely revolutionized the local wrestling scene in El Paso.

It’s a bowl of magic that general manager and founder Jose Ontiveros worked to build since 2012.

“This is something original; something for everyone,” Ontiveros said. “We want to put on a nice show for everyone. No obscenities, no bad language. We want New Era Wrestling to be an event for everyone.”

It was always a dream of Ontiveros to start up something like this. Now that his dream has become a reality, he is surrounded by a plethora of young wrestlers, and more importantly, he gets to do his dream with his five children. All five of his children are competitive wrestlers in New Era Wrestling and perform every Friday.

“I loved wrestling all my life,” said Ontiveros, who is a native of Chihuahua, Mexico. “My kids started training and they’re really good. That’s me saying that as their father, but other people have told me that as well. People call us the best wrestling group of all of the Southwest.”

It was the same dream that started with Ontiveros’ kids trading in shin guards and cleats for hours of training at a wrestling gym.

“Growing up, we grew up playing soccer and football—the normal sports everyone would play,” said El Tirano (The Tyrant), Ontiveros’ son who is a wrestlerd. “Our oldest brother was a very good soccer player and he even got scholarships to go out and play soccer. My dad didn’t really want him to leave because he wanted us to stay together as a family. One day, my dad knew a guy who was a professional wrestler and he wanted us to go try it out. We went for the first time, liked it and the rest is history.”

Then the dream took a new turn. Ontiveros and his kids started training individuals in their backyard and pioneered the idea to put on shows for the public. From its humble beginnings in a ballroom, to it’s growing stages at the EPIC Railyard, and now to its present day location, New Era Wrestling has grown substantially in numbers and in its fans.

“We went from 50 to 60 people per show and it felt like there were no people,” El Tirano said. “We stayed at the ballroom for a year, doing shows every 15 days and we decided to move it to a warehouse.”

The change was the best decision the organization could have made, according to El Tirano.

After the warehouse, the group moved its operations to the EPIC Railyard, where they saw a bigger audience. They were radiating local waves with their bi-weekly shows and making a citywide impact. However, the operational side of the events was not in their favor.

“We had to set up the ring and tear it down every time we did it, so it was kind of hard,” Ontiveros said. “We had the shows outdoors, so rain, snow or shine, we never cancelled a show.”

The difficulties they faced prompted the idea to move to a facility that accommodated their large audience and also a place they could regularly practice.

They found their home on 10400 Dyer St., where they can hold open daily practices, train wrestlers and put on a show every Friday night. Ontiveros believed that the move was not only beneficial to the audience, but also favorable for the wrestlers.

“When you come and train, you forget about everything,” Ontiveros said, looking around the facility. “We do classes, we do training and we make wrestlers.”

“Wrestling started here in El Paso back then—called ‘tiempos oros’ or golden times. It was when wrestling was popping and everyone was going to see it in Juarez or here,” El Tirano said. “It kind of died in the early 2000s, so we didn’t know anything about it since. When we came out as the New Era Wrestling, people were impressed that we were doing things differently. It wasn’t the typical Lucha Libre wrestling event. It was more Americanized, storylines behind the wresting. It’s just incredible how we pulled everyone out to watch wrestling again.”

In fact, after every fight, the wrestlers stay ringside and interact with all of the kids and families. Photos, autographs and high-fives are traded between the wrestlers and the different fans from across the city. It truly feels like a family-centered environment and every wrestler makes sure to broadcast that feeling at every show.

“We do things differently. All our wrestlers are younger guys, so these guys are athletic, they can do flips, so it’s not old-school wrestling; it’s a new era of wrestling because we want to change it up,” El Tirano said. “We want something different than what people were doing back then. We have fans, adults, who bring their kids and they tell us, ‘we used to go see wrestling in Juarez and this is totally different; people are more agile and it’s a better show.’”

Weekly New Era Wrestling fan Jose Martinez said he’s drawn to the matches because of the traditional impact it has on his personal life.

“I remember going to watch Lucha Libre matches when I was a young kid,” Martinez said. “I haven’t seen nothing like this (New Era Wrestling) and it’s great what they’re doing.”

In the past, New Era Wrestling has relished massive regional attention. They have performed at different events, such as Neon Desert, and have even brought wrestling celebrities out to their shows. Professional wrestlers such as Carlito, Brian Cage, Taya Valkyrie and more have come out to showcase their talents. According to Ontiveros, the different celebrity wrestlers greatly enjoy everything New Era Wrestling has to offer and are very willing to come when they have a chance.

Currently, the organization has a local television slot where they talk about upcoming matches and promote events. As the general manager, Ontiveros tries to bring a celebrity every month to amp up the hype for the center.

“Our goal is for the whole U.S. to know about us,” Ontiveros said.

Although Ontiveros believes that becoming a wrestler is a special talent that cannot be done by everyone, El Tirano encourages strong-minded individuals to one day give it a shot.

“If someone wants to try it, give it all they got and practice, you can become a wrestler. You have to have a lot of power, will, mental strength,” El Tirano said. “It’s a complete package into one whole thing. It’s tough—moves are tough, remembering stuff. It’s not just kicking a ball around; you have to be in the right spot, know all the moves and entertain people.”

Shows every Friday start at 6 p.m. and tickets may be bought at the door. Each week they offer different discounts for students, military and children. For more information about New Era Wrestling, visit their Facebook page at New Era Wrestling Ent.