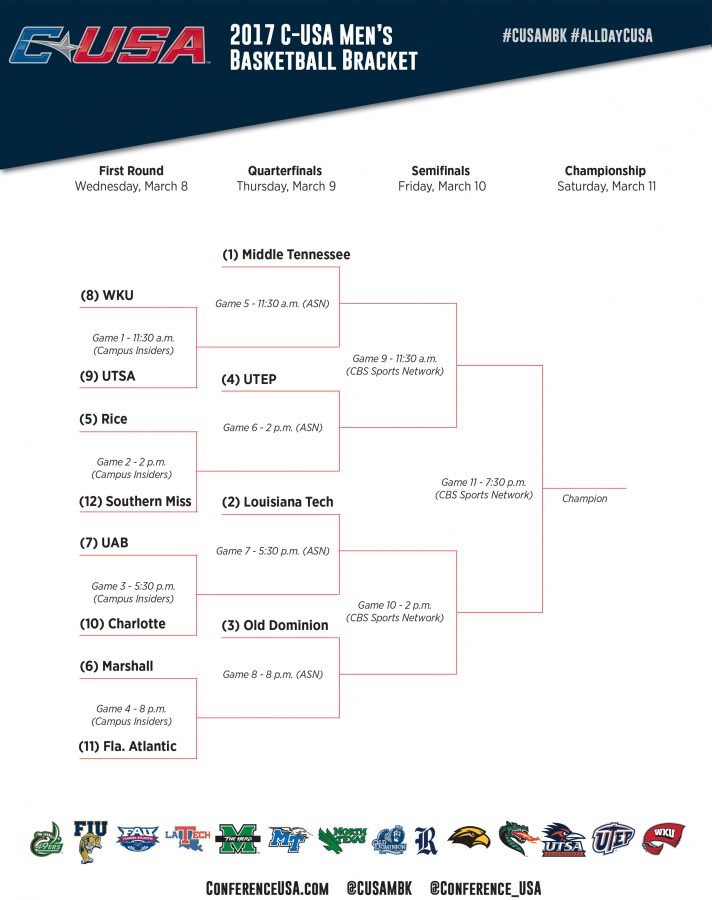 From a low-scoring to a high-scoring affair, including a game decided in the final eight seconds, an exciting first round of the Conference-USA tournament is now in the books. Find out how each team fared and who will be squaring off against each other next in the quarterfinals:

(9) UTSA 56 (8) Western Kentucky 52
Three Roadrunners scored in double-figures as UTSA held on for a 56-52 triumph over Western Kentucky. The win for UTSA is their first-ever victory in the C-USA tournament since joining the league in 2013. Freshman guard Byron Frohnen finished with his fifth double-double on the season collecting 11 points and a season-high 13 rebounds for UTSA in the win. Justin Johnson finished with a double-double of his own for Western Kentucky with 15 points and 16 rebounds but it was not enough as the Hilltoppers shot just 30 percent (17-for-56) from the floor in the loss. UTSA, the no. 9 seed, will now face top-seeded and regular season champion Middle Tennessee tomorrow in the quarterfinals. The Blue Raiders defeated the Roadrunners 69-59 back on Feb. 2 in San Antonio.

(12) Southern Mississippi 75 (5) Rice 86
Rice guards Marcus Evans and Marcus Jackson secured 20-plus points each to help the Owls defeat Southern Mississippi 86-75. Evans had 26 points and Jackson added 20 points in the win. Rice made 13 threes while shooting an impressive 45 percent from behind-the-arc and shot 91 percent from the charity stripe making 29-of-32 free-throw attempts. The Owls also out-rebounded the Golden Eagles 41-24. Southern Mississippi’s Quintin Campell earned 23 points and Cortz Edwards had 21 in the loss. The no.5 seed Rice will face no. 4 seed UTEP tomorrow in the quarterfinals. The Owls fell at home to the Miners 79-71 on Feb. 18 in Houston.

(10) Charlotte 73 (7) UAB 74
C-USA’s two-time defensive player of the year William Lee scored a dunk with eight seconds left to lift hometown UAB past Charlotte 74-73. 49ers’ guard Andrien White hit a go-ahead three pointer with 13 seconds left but Lee answered right away as his team quickly drove down the length of the court after the Charlotte basket. Four Blazers scored in double-figures as forward Chris Cokley earned a double-double with 19 points and 13 rebounds. UAB shot 49 percent (28-for-57) from the floor and 47 percent (8-for-17) from behind-the-arc in the contest. Ironically, White and Jon Davis combined for 49 of the 49ers total of 73 points in the losing effort. The no. 7 seed UAB advances to the quarterfinals where they will face no. 2 seed Louisiana Tech tomorrow. The Blazers were victorious over the Bulldogs in their last matchup 79-70 in Birmingham. The matchup is highly anticipated after the last time the two schools met with a bench clearing brawl taking place towards the end of the game. The Bulldogs were forced to finish the game with just four players on the court.

(11) Florida Atlantic 74 (6) Marshall 89
Marshall used a big first-half, 52-29, to run past Florida Atlantic 89-74. Five Marshall players finished in double-figures as guard Stevie Browning tallied 22 points with five rebound and five assists for the Thundering Herd. Marshall knocked down 12-of-33 three point attempts to shoot 36 percent from deep. Justin Massey scored 19 points and Nick Rutherford added 14 with five rebounds for the Owls in the loss. Marshall, the No. 6 seed, advances to face No. 3 seed Old Dominion tomorrow in the quarterfinals. The Monarchs blew out the Thundering Herd by 21 points, 86-65 back on Feb. 23 in Norfolk, Virginia.