The thrill of finding close parking 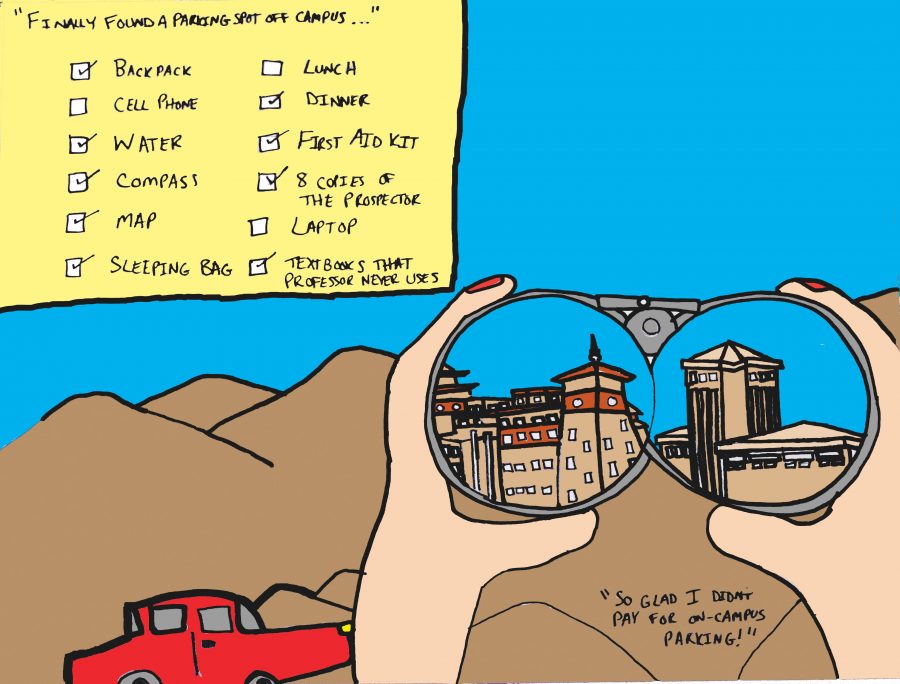 It’s no secret that UTEP is a large commuter school. With that, comes plenty of students rummaging for parking every morning.

Going into UTEP, my brother, who was an experienced super-senior, taught me there was no need to buy a $300 parking permit when I could simply park in front of a stranger’s house.

I used to find parking almost every day by Taco Bell, which at the time had no parking meters, or somewhere on Kerbey Avenue, going up to Campbell Street at the furthest. Every semester, the struggle became more and more real. It got to the point where at the end of my sophomore year I would park where New York Avenue meets Florence Street, which is a 10-15 minute walk to class plus however much time it took to find the spot.

I know what you’re thinking, “wow you’re so lazy, can’t walk 10-15 minutes to class.” Truth be told, I actually enjoy a walk that wakes me up, but I could be spending at least five of those minutes with my eyes shut still in bed. At the end of my junior year, my early-onset senioritis kicked in hard. I mastered extreme parallel parking on Stanton Street, while heavy traffic swished by.

I’ve met some nice folks during my parking adventures. One man on Stanton Street told me I could park in front of his house whenever I’d like to, and if it was trash day I could just move the trash bins up to his porch and go ahead and park there. Although I wasn’t sure if he was trying to get me to do his chores or just be friendly, it was a nice gesture. I found another lady a few houses down often sitting on her porch in the mornings smiling at me. She didn’t say much, but would always laugh when clumsy me would hustle back to my car, forgetting the occasional textbook, coffee or one of the many items I carry every morning.

This semester, my 2016 Stanton Street parking spree came to a close when reality (also known as the streetcar construction) struck. No more morning cheer from the lady on her porch or potentially moving a guy’s trash bins for him. As of this semester, I now have to hustle to find somewhere on Kansas or Campbell or the streets that run off of it. It’s my sophomore year all over again out there, but worse. Some streets require parking decals like they have for years in Sunset Heights. I guess it was always too unrealistic to think everyone is just fine and dandy with students parking in front of their houses all day, every weekday.

The risk of parking on campus and possibly receiving a parking ticket became tempting, so I tested my luck. The first time I woke up late and was going to speak in my class, so I knew I had to be on time. I parked in S4, across from the Sun Bowl Parking garage and was not ticketed. This led to a second attempt the following week. I quickly scanned the area for bright green vests and when the coast was clear, I speed-walked to class and speed-walked back with a friend as it ended. “Just in time” my friend exclaimed as a parking enforcer approached my car. He quickly heard the statement and picked up his step to the scene of the crime. He took one quick glance at my naked rear-view mirror then glared back at me. “I was only here for two minutes,” I begged. “No, you two just got back from class.” He was a pro, he smelled the lies. “I’ll give you a warning,” he sighed. Just like that, I avoided my first UTEP parking fine as it stared me in the face.

UTEP parking fines are no joke: they can really add up.

One friend of mine paid a grand total of $500 to remove the boot she received on her car in the parking garage after racking up nine $50 unpaid tickets plus the $50 to have the boot removed.

My advice is to always try to talk your way out of your UTEP parking tickets at SGA traffic court, who meet every other Friday, especially the first one. Word on the street is they usually dismiss the first one.

With this semester plus one more year to go until I finally receive my diploma, the struggle for the perfect unassigned parking spot will continue. Or maybe one day I’ll be like my boyfriend, who’s also without a parking permit, but simply drives up University Avenue every day and parks wherever the line of cars end. He probably saves way more time not thriving off of stress and thrills like his girlfriend.

Maybe one day all my dreams will come true and they’ll give me VIP, 24/7 parking spot in front of the Union, or at least occasionally a spot will open up in front of Kinley’s, that would be cool too.