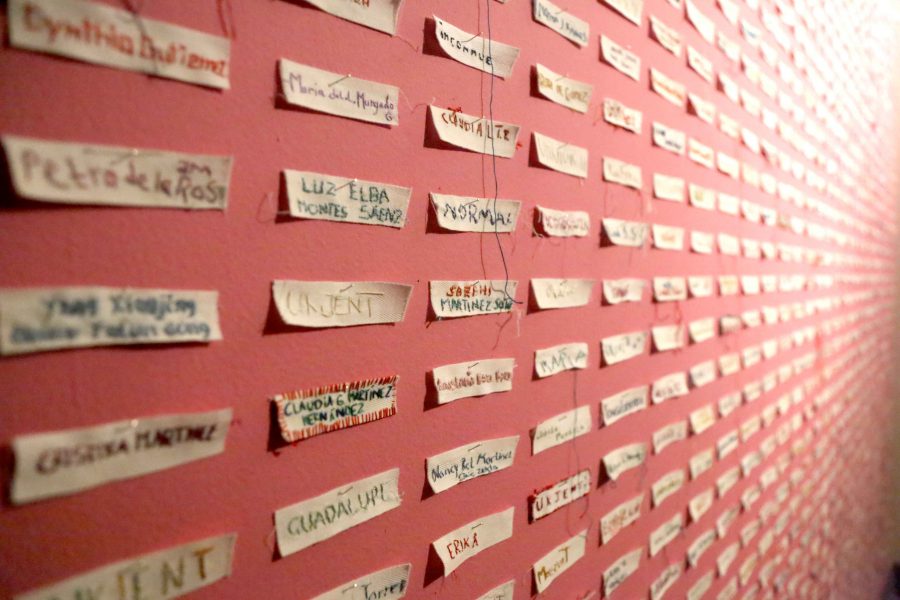 Artist Lise Bjorne Linnert collaborates with others to stitch name tags of women who were murdered in Cd. Juárez.

“Desconocida Unknown Ukjents,” an exhibition by Norwegian artist Lise Bjørne Linnert about the femicide (female homicides) in Juárez is on display at the Rubin Center to bring attention to the murders of women across the border.

In Ciudad Juárez, México, brutal murders and kidnappings of women have occurred since 1993. Bjørne Linnert invites the world to be part of her art project by embroidering two nametags, one with the name of a disappeared woman from Juárez, and a second tag with the word “unknown” written on it.

“A very important aspect of this is that when you embroider a name, you are remembering that one person and you honor that person,” said Linnert. Approximately 7,900 hand-embroidered nametags have been stitched by 4,800 individuals in over 500 globally arranged workshops.

Linnert said the exhibition of not only about showing the reality living in Juárez, but to create awareness that femicide happens all around the world.

In 2008, Linnert visited Juárez, where she met Marisela Ortiz. Ortiz a teacher in the lower valley of Cd. Juárez and founder of the organization Nuestras Hijas de Regreso a Casa (our daughters returned home) an organization with the purpose of finding the missing women in the city.

Linnert and Ortiz started to work on the project as women continued to disappear and as more bodies were found.

“My intention with the art project ‘Desconocida Unknown Ukjent’ has neither been to promote nor denounce the city of Juárez, but to shed light onto the terrible situation that seemingly has no end, and connect it to the rest of us, using my voice through art,” said Linnert.

Linnert has been working on this project for nearly 10 years, and in every exhibition she invites the local community to be part of this collaboration.

“I didn’t plan it in the beginning to work on this for so long, but it was because I went to an exhibition dedicated to situation in Houston, and then three weeks later there were new names and that is been going for so long that now,” Linnert said. “Now it is a tour all over the world. We are coming to México City afterwards, and in that sense, it is sort of have come to where it started from.”

The exhibition will be also on display in Cd. Juárez in partnership with the Juárez Contemporary art gallery to bring this experience to both sides of the border.

“We need to open the border, especially now with the new president, these issues become more relevant; it is the unknown that connects us,” said Linnert, referring to the protests to defend women’s rights that have been taking place worldwide.

The number of women who have been murdered to this day remains unknown as only some of the women have been found.

“I also think that when you embroider her (name), this is not about violence, it is about humans, and I think you can connect to her,”” said Linnert.

The exhibit will be on display at the Rubin Center through March 21.