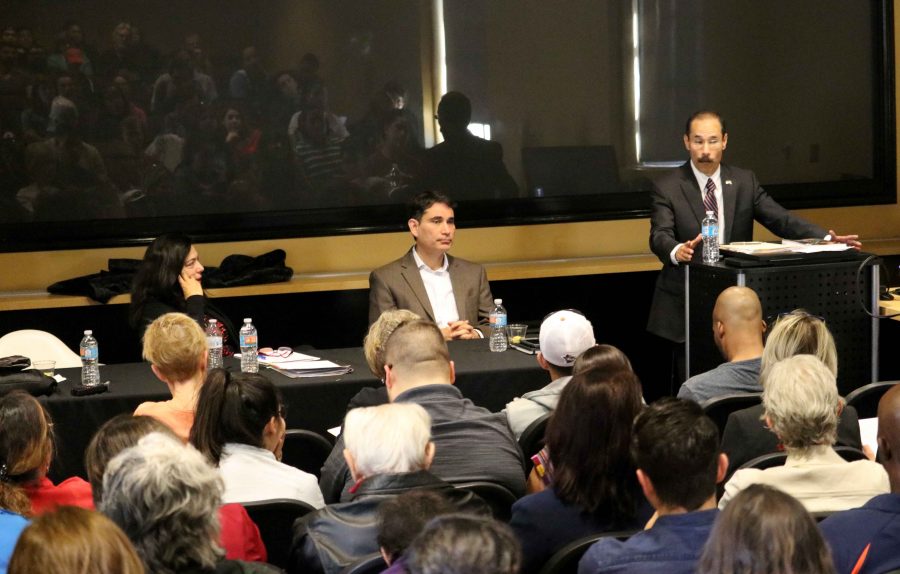 A panel of three borderland scholars gathered at UTEP’s Stanlee and Gerald Rubin Center for Visual Arts on Feb. 20, to discuss border relations in the era of current President Donald Trump.

Dr. Tony Payan, economist Lucinda Vargas and Professor Francisco Llera were the presenters during the panel.

Payan, who is the director of the Mexico Center at Rice University, focused on the interdependence of the United States- Mexico relationship.

“It has become a dependent relationship, more than an interdependent one with Mexico more dependent on the United States,” said Payan.

The former UTEP Professor also described the current administration’s involvement along the border and some aspects of the North American Free Trade Agreement (NAFTA) as being detrimental to life in the border.

“I see it as a series of dependencies where people have different leverages and they used them to profit and not to create communities and not for the benefit of everyone,” Payan said.

Consequently, Payan also attributes the rise of nationalism in both countries to these dependencies and divisions.

“There is a rise in nationalism, people returning their visas in Mexico, in response to Trump,” he said.

Looking at the future, Payan anticipates a strengthening of antagonizing notions against those on the other side of the proposed wall.

“We can expect that discourse to become more rigid. In other words, the idea that Mexicans are the enemy, that the people from the other side at the ‘bad hombres’ is only going to get worse,” he said.

Vargas started out her presentation by detailing NAFTA’s length by stating that it was “effective for 15 years.” She also explained the production chain for automobiles, which Trump wants to impose a 35 percent tariff on, are made in Mexico with American parts.

“Mexican plants have 2.7 million workers, which represent 80 percent of Mexico’s manufacturing,” she said.

In terms of imports, Vargas mentioned Mexico as the top corn buyer in the U.S. that “contributes $2.4 billion a year.”

However, as part of the retaliation process, Mexico is looking to Brazil and Argentina as possible trade partners to replace the U.S., according to Vargas.

Lastly, Llera’s focus was more towards the mobilization of the border communities toward other sectors of service other than manufacturing jobs.

“Mexico has 46 trade agreements with different countries; the most in the world,” Llera said.

“We have good tourist infrastructure, and a great medical infrastructure with good cost in medicines,” he said. “As North America is aging, Ciudad Juarez has a chance to attract elderly people in terms of real state.”