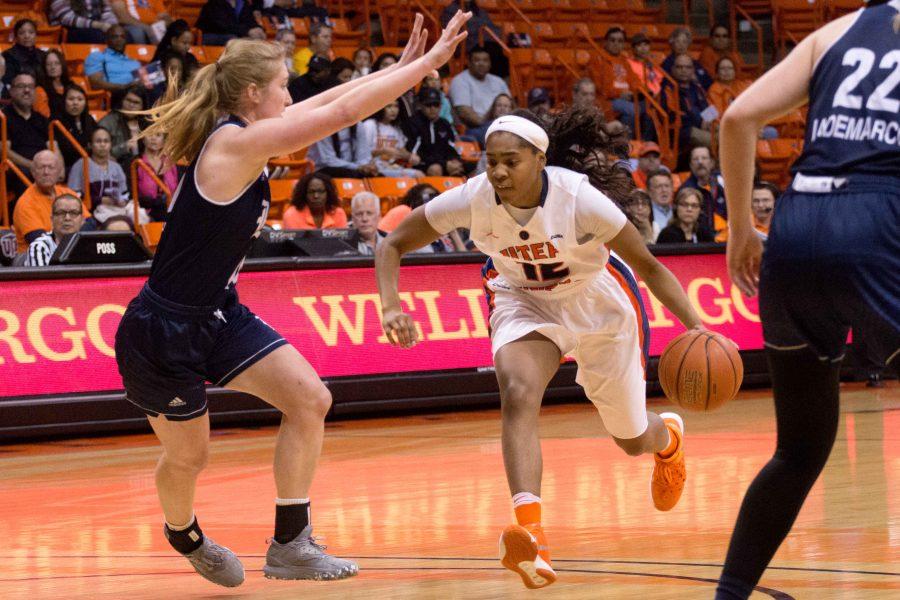 As the UTEP women’s basketball team watches their season come down to crunch time, the Miners lost another single digit game to an opponent above them in the tight Conference-USA standings on Saturday. The Rice Owls left the Don Haskins Center with an 80-76 win and the Miners were left clinging to the 12th and final seed in the C-USA tournament.

The Miners battled the Owls in a game that never got out of a single digit lead in either team’s favor and not unlike most games this season, UTEP saw their opponents take yet another close one. The Miners are 2-7 this season in single digit games.

“It was definitely a dog fight,” said head coach Keitha Adams following the game. “This team’s been through a lot and there’s two ways you can go with this type of thing, you can feel sorry for yourself or you can just get flat ticked off and get motivated.”

One player who was clearly motivated on Saturday in front of a raucous crowd of 1,422 was senior guard Sparkle Taylor, who has clearly become UTEP’s go-to scorer this 2016-17 season. Taylor scored 34 points against the Owls before fouling out in the closing minutes of the game.

Taylor was informed just before speaking to the press after the game that she was the only player in UTEP women’s basketball history to score at least 30 points in back-to-back games. Taylor had 34 points against North Texas on Thursday night—the most points in a conference game for a UTEP player in 36 years.

“I guess it makes you feel good about yourself, like all the hard work you put in pays off a little bit,” said a very humble Taylor, eyes down toward the microphone.

The rest of the UTEP players contributed 42 points on the day, with forward Tamara Seda putting in 13 and grabbing 10 rebounds to claim the only other double-double besides Taylor’s 34 points and 11 rebounds.

Seda’s effort sparked her team to tie the game early in the fourth quarter when she claimed an offensive rebound at the nine-minute mark and was fouled by Rice forward Lexie Ducat. Seda’s mouth was injured during the play and left her laying on the floor, bleeding.

She would leave the game to an ovation from the crowd and the cheers of her teammates.

As soon as the ball was back in play, Taylor would hit a 3-pointer from the top of the arc to tie the game 54-54, the first tie since there were three minutes left in the third quarter.

The game was back and forth again, with momentum unable to be established on either end – due in large part to a total of 54 fouls called between the two teams during the game. Although free throws were not an issue, with Rice making 27 and UTEP making 26, the constant stoppages made it hard for either team to get a flow going.

“It was called tight. There was some ‘love touches’ out there that got called, but it is what it is,” said a smiling Adams. “We just came up a little bit short today. But, I am very proud of our team.”

UTEP never found momentum in the fourth quarter as Rice guard Maya Hawkins made a timely three-pointer at 4:34 and hit almost every free throw down the stretch—eventually leading her team with 25 points.

UTEP continued to foul, make an occasional 3-pointer, but Rice just never seemed to miss a free throw like the Miners needed them to, and then Taylor fouled out.

The Miners will hope to find momentum as they continue into the season’s crunch time against Florida Atlantic, the team that sits at 14th in the C-USA standings, on Thursday at 7:05 p.m.