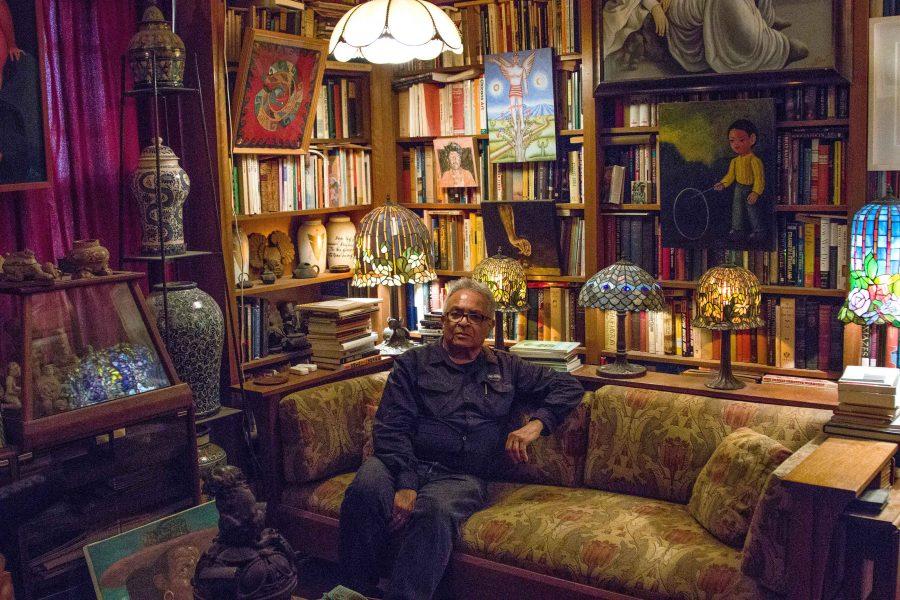 Juan Sandoval surrounded by his collection at his apartment.

With altruism as the main drive behind his art collection, UTEP librarian Juan Sandoval has amassed over 1,000 works of art that he keeps in his modest Sunset Heights apartment. “I always had poor friends growing up, so I would help them out by buying their art,” said Sandoval. The first time he bought a piece was in 1975 to encourage a friend.

The works Sandoval has acquired throughout the years range from simple Native American tapestry to intricate and abstract lithographs made by prominent artists such as Luis Jimenez, Francisco Toledo and Marta Arat. “I have been very fortunate that a lot of the people I helped from the very beginning have gone on to become well-known, and their works have increased in value,” said Sandoval.

Sandoval was born in the San Luis Valley region of Colorado. He shared his home with 10 siblings growing up, which was a factor in his decision to live a minimalistic lifestyle.

“Having had so many people in my life at all times brought about the joy of living alone,” said Sandoval. Consequently, the 71-year-old librarian attributes his ability to acquire artistic works to his lone lifestyle.“Living alone has given me the freedom to travel and most importantly help others by purchasing their art,” he said.

An opening for the reference librarian position at UTEP brought him to the Sun City in 1981. He now works at the Special Collections department of the library, primarily focusing on bibliographic instruction—teaching how to do general research—and helping students with research in the subjects of art and Chicano studies.

El Paso has also influenced his approach to art collecting and the way he categorizes his own collection.

“At a certain point, you realize that if you are going to start a collection you have to focus on certain things. I decided to focus on the Latino, Mexican, Mexican-American border experience,” said Sandoval.

However his collection isn’t limited to just Chicano art; he also owns a vast library of texts in different languages such as Japanese, Polish and Russian. Due to its magnitude and authenticity, the collection also draws attention from different galleries and museums such as the El Paso Museum of Art and the National Museum of Mexican Art in Chicago.

“I find it embarrassing. It brings me a lot of notoriety as a collector, more than the artist gets,” said Sandoval.As for his legacy, Sandoval plans on leaving the collection as patrimony for the Latino community.“My sister advised me not to leave this for anyone in the family, ‘it belongs to the people’ she said. It’s a legacy I want to leave for the Hispanic population,” said Sandoval.