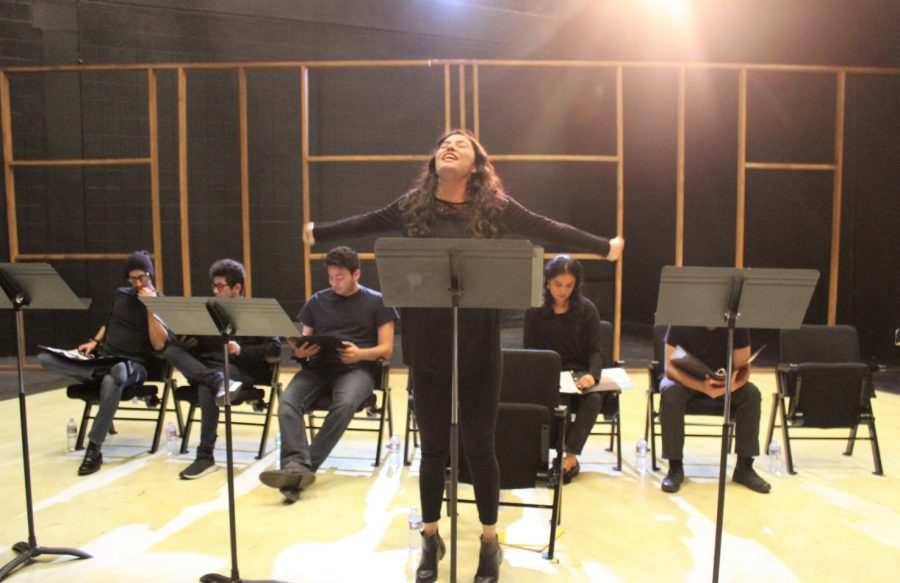 Under a fitting set of dim lights, award-winning playwright and El Paso native Octavio Solis held a Q&A session open to the general public at UTEP’s Studio Theater on Feb. 2. The session was led by Assistant Professor of Theatre, Kim McKean, and included the cast and crew of the upcoming UTEP production “Lydia,” a play written by Solis himself.

The session was divided in three parts—a brief introduction by Solis, a set of questions prepared by McKean, and an open forum for the audience to inquire.

McKean introduced Solis to the audience by citing some of his accolades, “he has written over 20 plays and is regarded by some as a modern Arthur Miller,” she said. The crowd also got a glimpse into Solis’ newest artistic venture, as the Riverside High School graduate shared details on a new book he has been working on. The book is an anthology comprised of 50 short stories Solis calls “retablos” (retables). “They helped with writers block at a time when I was not getting any work,“ Solis explained. He shared two of these “retablos” with the audience, “Blood and Coke,” and “The Want.”

“Blood and Coke” is a story about Solis’ childhood and his upbringing in a primarily Mexican household, emphasizing on the innocence of children and the epic sense of scope they tend to analyze mundane situations with.

“The Want” offers a stark contrast to the previous short story. It places special emphasis in life after high school and leaving college for the holidays to visit the parents. It also highlights the uncertainty of loneliness and the morality of actions that lead to the satisfaction and distinction of wants and needs.

Once the discussion started, Solis seemed eager and open to answering questions of all types.

“It is me. I am marked by this town,” said Solis when he was asked about the influence El Paso and the American Southwest have on his work. “El Paso is its own country, I call it ‘La Frontera,’ “ he continued, “it is home but it has its own rules.” “Santos & Santos” was the first of Solis’ plays to make reference to El Paso, winning the Roger L. Stevens Award in 1994.

However, this strong sense of identity wasn’t always beneficial for Solis. As an El Paso transplant in Dallas, he struggled to find work as an actor, which is what he went to Trinity University’s Theatre Centre in Dallas for.

“I was a bartender and used the stage at the club to put on my own plays and act on them,” Solis said.

Agents would attend Solis’ plays, but they would praise his theatrical style of writing as opposed to acting. “I think acting helped my writing career because I learned what actors like, and what they would want to do as an actor,” he explained.

Solis was also asked about his openness to working alongside actors during rehearsals.

“As a playwright there are two parts to the job, loneliness in writing, and a more social approach during rehearsals,” he said.

Solis disclosed some information regarding a long-term project he has been working on as a culture consultant for Disney in their upcoming day of the dead themed animated feature “Coco.”

“They are trying to cater to two different audiences, Mexican Americans, and Mexicans,” he said.

The session concluded with a “Lydia” cast member asking for advice for artists with a Mexican background.

“You have to be better than everyone else, and create the opportunities for yourself if they are not there for you,” he said.