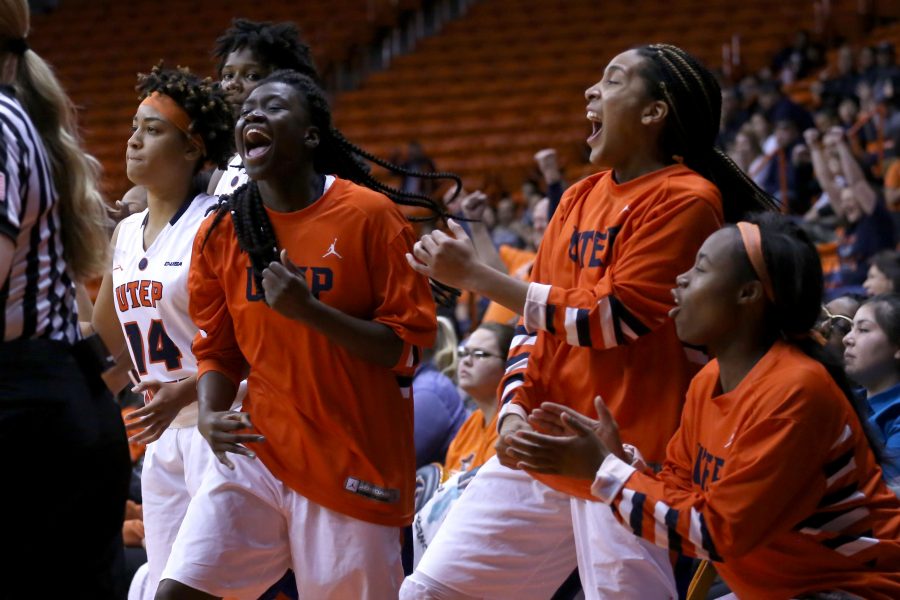 The UTEP women’s basketball team used a 30-10 second quarter run to put the Marshall Thundering Herd away early, 84-74 at the Don Haskins Center, on Jan. 28.

Marshall has been suspect on the road all season and showed no differently in El Paso as they fell to 1-6 in away contests. UTEP (6-14, 3-5 C-USA) snapped their ugly two-game slide with the victory on Saturday, while Marshall (12-8, 5-5 C-USA) tripped up to the younger Miners.

“After the loss to Western Kentucky, we had an only-players meeting. We just talked about coming together and talked about what we had to do to win. I think we all came out fired up,” UTEP’s senior star Sparkle Taylor said. “We didn’t want to lose two in a row.”

In the defining second quarter, Taylor, who is also UTEP’s leading scorer (20.3 points per conference game), scored ten of her 25 points. The Herd’s offense was nearly nonexistent in trying to keep up with the monstrous period UTEP was enjoying. Marshall only connected on two buckets in the ten-minute span. And with 5:18 remaining on the clock before the break, Marshall did not see a shot go through.

“It was one of the things we talked about as a team, is winning the second quarter. Too many times this year, we play well the first quarter and just let down in the following quarter,” Adams said. “We put up a lot of points, and we hit so many shots.”

UTEP’s lead at halftime was secured at 42-27. From that point on the lead belonged the the home team throughout.

In the last three periods of the matchup, head coach Keitha Adams only saw her team turn the ball over a total of six times, while the Herd coughed it up 19 times. The Miners earned 28 easy points from the Marshall mistakes.

“We did a lot better with our turnovers. That’s something I’ve been on my team a lot about. If you turn it over, it’s hard to win games,” Adams said.

For just the second time in the year, the Miners scored over 80 points in a game without overtime needed. This was thanks to the starters in orange and blue that all scored in double-digits. The bench threw for the Miners threw in 10 points of their own.

“I thought we executed our offense the best today. We did well against the zone and man-to-man defense all game. A lot of girls played today, but that was good for us. Sparkle had a great day,” Adams said. “We had five players in double-figures, that’s huge for us.

The two freshman starters on UTEP’s roster, Zuzanna Puc and Katarina Zec, combined for 24 points. It was Puc’s second career double-double outing with her 13 points and 11 rebounds before she reached the foul limit.

“Zuzi [Puc] had a big day. We need that every game from her. If we have that more, we are in business,” Adams said. “She’s just going to keep getting better and better, and stronger.”

UTEP forward Tamara Seda also contributed with a double-double, totaling 15 points and a team-high of 12 rebounds. Her play down low aided the Miners down low as they scored 32 points in the paint. And, as a team, UTEP grabbed 18 offensive rebounds.

Despite little scares for a Marshall comeback, UTEP withstood the Herd, who cut the lead to single-digits a handful of times during the second half. Marshall’s Shayna Gore tried to bring back the Herd on multiple occasions with her 26 points on the day, but she had very little help in the meaningful times throughout the contest.

“Obviously Gore is a difference maker, she finished the day with 26. But I think we played everyone else well, especially down low,” Adams said. “We had our composure today, and we kept it when things got a little interesting.”

Next the Miners will travel on a four game road trip, starting with UAB on Feb. 2. UTEP will not be in front of their home crowd until Feb. 16.

“After a tough week and some of the losses that we’ve suffered, it was great win for us today. We needed this. For us to come out like this after the WKU game, was amazing. I challenged our team after that loss and they responded today. I refuse for us to let down, we’re going to keep fighting,” Adams said.