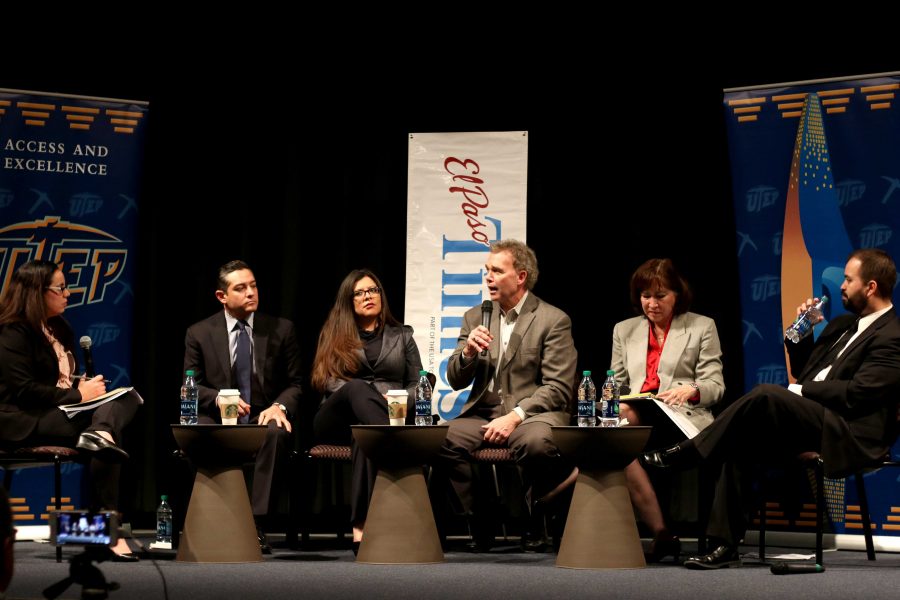 UTEP and El Paso Times hosted a legislative forum featuring El Paso state representatives with Zahira Torres as the moderator on Friday, Jan. 27, at the Union Cinema at Union East.

Torres started by asking what the representative’s priorities are in the upcoming legislation session.

Rep. Pickett said that his priority is transportation.

Rep. Ortega said education and stimulating the economy in El Paso, and plans to introduce a bill which allows local governments to set minimum wage.

Rep. Moody said that a lot of priorities are found in the appropriations bill, but said that mental health reform in Texas was very important to him.

Rep. Gonzalez said that because there are 260 colonias, many of them without water or electricity, she wants to make sure that the Economically Distressed Areas Program, which offers financial assistance to provide water and wastewater services, does not become defunded. Gonzalez also said that school finance is another issue as well as repealing the A-F grading system for schools.

Concerning the budget, Rep. Pickett said that the budget won’t take form until the last week.

On special items, which help pay for programs such as UTEP’s pharmacy school, Torres asked what the legislators are doing to keep the pharmacy school alive.

Rep. Ortega believes that the Texas Speaker of the House Joe Straus when he says they will place money into Child Protection Services, mental health and education even with a tight budget.

Rep. Pickett said that the reason why the senate took out specialty items was to make universities prioritize and that he believes that UTEP will keep its pharmacy school.

On healthcare, Torres asked what were the decisions and challenges of the possible repeal of the Affordable Care Act, also known as Obamacare, that legislators will face this upcoming legislation session.

Rep. Blanco said that Texas is losing out by holding the current position on the ACA and questioned what the Republicans will replace the ACA with.

On concealed handguns on campus, the representatives agreed that it is likely to stay and that there are several bills that are trying to take guns on campus even further.

On medical marijuana, Rep. Moody said that he introduced a bill that decriminalizes marijuana under one ounce. He does not expect it to pass but says that Texas is just starting to have conversations about policy reform on marijuana.

On SB 6, known as the Bathroom Bill which penalizes schools that allow students to choose the bathroom in which they identify with, Rep. Blanco called the bill an attack on the LGBT community.

Rep. Gonzalez, Ortega and Moody were all against the bill.

Rep. Pickett was also against the bill and said that he does not believe that the bill will have negative economic impacts like South Carolina that has a similar law, and does not expect the law to pass in the house.

On school vouchers, Rep. Gonzalez says that she does not believe any voucher bill will get into the house. Rep. Picket, however, was more cautious and thought it a possibility and said that vouchers were not about the children but about money.

All representatives agreed that the recent threat on so-called Sanctuary Cities was a problem, especially because of the vague definition of the term. El Paso has been called a Sanctuary City by some conservatives because generally, local police do not inquire about ID to ensure legal status.

On whether or not the representatives support SB 437 and HB 841 which support efforts to bring a law school to El Paso, all agreed that they support the bills but that there is still a long way to go before El Paso might see one.

Rep. Pickett says campus carry will not be repealed. #timesliveutep