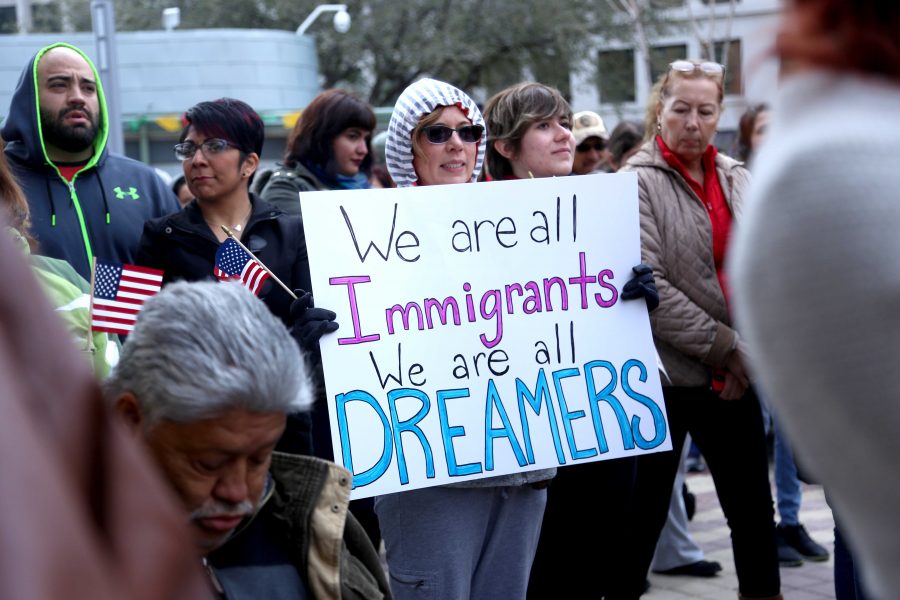 On Sunday, Jan. 15, hundreds of supporters gathered at San Jacinto Plaza in downtown El Paso to listen to U.S. Rep. Beto O’Rourke and backers of protecting undocumented students, who were granted executive amnesty by President Barack Obama in 2012.

“We’re here today because our current President, Barack Obama, made a commitment to hundreds of young people in this country, that we call dreamers, who were brought here by their parents, who must’ve made excruciating decisions themselves to leave their countries of origin,” O’Rourke said.

The community meeting was held just five days before President-elect Donald Trump will be sworn in as president of the United States. While campaigning, Trump’s platform called for the immediate termination of Obama’s amnesty.

DREAM stands for the Development, Relief and Education for Alien Minors Act. There are over 700,000 registered dreamers in the U.S. O’Rourke said that 200,000 of those are in Texas and around 10,000 reside in El Paso alone.

“We’re here to tell our president-elect that they’re not going anywhere,” O’Rourke said.

On Friday, Jan 13, O’Rourke introduced a bill to Congress that would protect the personal information of dreamers and not allow the federal government to use their information to deport them.

Those in support of DREAMers marched into the plaza chanting, “Build bridges, not walls” and holding signs that read, “We are all immigrants, we are all dreamers” and “education, not deportation.”  A banner and petition were provided that O’Rourke said he would take back to Washington and present it to Congress.

UTEP alumna and member of Texas Sen. Jose Rodriguez’ staff, Claudia Yoli shared her story about growing up as a dreamer. Born in Venezuela, Yoli moved to the U.S. with her mother when she was 8 years old.

“Unfortunately, the biggest challenge for Dreamers like me is that legislators, and soon-to-be President Trump, who want to make our dreams unattainable,” Yoli said.

Despite not being able to vote herself, Yoli has worked with others to register thousands of El Pasoans to vote.

“We will not let small minds like President Trump’s tell us that our dreams are too big,” Yoli said.

Sen. Rodriguez, D-El Paso, gave notice to those in leadership positions across the state that, as a Texas legislator, he will not ignore the voices of immigrants.

“I am here to stand with the Dreamers. It’s not just the young students, all of us our dreamers, whether citizens or not,” Rodriguez said.

“We do not need to spend any more money (on border security). We don’t need any more walls or fences. What we need is to take advantage of this wonderful asset that we have with Mexico, with Mexican Americans and with immigrants from around the world,” O’Rourke said.