Is the “Fire Floyd” movement justified? 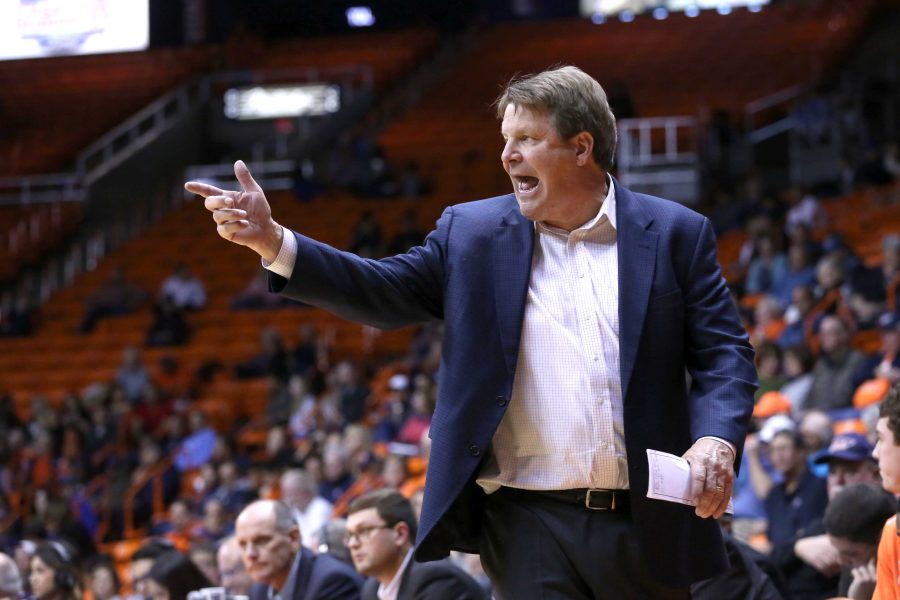 A new chapter in UTEP lore was written a few weeks ago when former Miner football head coach Mike Price stormed into the stands to rip a “Fire Floyd” sign out of the hands of UTEP basketball fan Louis Cepeda.

Price had been sitting with UTEP Athletic Director Bob Stull during the game and had apparently had enough of the crowd booing the team’s play—and the sign. The sign, the calls to local sports talk radio stations, boos and a noticeable lack of attendance have all been the byproduct of the UTEP men’s basketball team’s poor performance this season.

The team is currently 4-13 and had lost 12 in a row prior to winning two in a row against Florida International (in double-OT) and Florida Atlantic (in OT).

The majority of the fans’ blame has been pointed at one man—head coach Tim Floyd. But is Floyd worthy of firing? Just like the recent presidential election, there are those who see it both ways.

Floyd was named men’s head basketball coach on March 30, 2010. He had been without a job since June 2009, when he resigned from coaching the Southern California men’s basketball team.

In a letter to USC Athletic Director Mike Garrett, Floyd claimed to have lost his joy for basketball, saying in part, “I no longer feel I can offer the level of enthusiasm to my duties that is deserved by the university, my coaching staff, my players, their families, and the support of Southern Cal. I always promised myself and my family that if I ever felt I could no longer give my full enthusiasm to a job, that I should leave it to others who could.”

Following the 2009 season and prior to Floyd’s departure, Floyd’s Trojans had lost Demar DeRozan, Taj Gibson and Daniel Hackett, who all declared for the NBA draft.

When several recruits de-committed and current player Marcus Johnson left to go pro, despite clearly not having much chance at an NBA career, Floyd had seemingly had enough. At one function, Floyd told boosters “Kansas has two players who would have been NBA lottery picks, Cole Aldrich and Sherron Collins, and they are returning to school, good for them,” according to Los Angeles Times reporter Chris Foster. “Our guys get an offer from Islamabad and they’re gone.”

Following Floyd’s departure, USC would vacate 21 wins from the 2007-08 season and withdrew from postseason consideration for the 2009-10 season.

Floyd took over a 26-7 UTEP men’s team, which had been ranked as high as 24th in the AP poll and lost in the first round of the NCAA Tournament under head coach Tony Barbee, who left for a job at Auburn following the season.

The 2010-11 season would prove to be Floyd’s best at 25-10, with all of Barbee’s players still on the team (minus power forward Arnett Moultrie who transferred to Mississippi State). Floyd brought in center John Bohannon prior to the season.

The mercurial big man proved to be a steady force in the middle for the next four years and one of only four Floyd recruits to graduate during his seven-year tenure.

In a recent press conference following the departure of star forward Terry Winn, while announcing the suspension of guard Omega Harris due to lack of class attendance, Floyd said, “I have convictions about why I’m here. These kids are here to get diplomas and they’re here to get degrees.”

Bohannon—a three-star recruit—is also tied for the highest-rated recruit to attend UTEP for more than one season under Floyd. Much like the recruits who backed out on him at USC in his final years, Floyd has been plagued by the same problems during his time at UTEP.

Although it can be hard to get a true count of the players who have verbally committed and then backed out, there are several high-profile players who have left UTEP “high and dry” so to speak. Isaac Hamilton, a guard from Los Angeles, went so far as to sign a National Letter of Intent to play at UTEP and then changed his mind.

Floyd would not release the five-star recruit—the highest in UTEP history—from his NLI to transfer to USC, to be closer to his ailing grandmother, according to Hamilton. Eventually Hamilton would sit out a year and is currently starring for the UCLA Bruins.

The 2010-11 Miners went to the NIT and finished tied for second in the conference. Like the previous season, UTEP exited in the first round of the postseason in 2011. There would be no postseason again until 2013-14, when the Miners were rewarded with a trip to the College Basketball Invitational following a 23-11 season and a fifth-place finish in conference.

During the season, three Miner players were kicked off the team for undisclosed reasons that was later discovered to be betting on basketball games. McKenzie Moore, Jalen Ragland and Justin Crosgile became three of the 20 players during Floyd’s seven years to transfer, go pro or be kicked off the team prior to their projected graduation date.

This equates to 47 percent of all players who have signed to play for Tim Floyd at UTEP.

As UTEP’s performance on the court has continued to disappoint fans this season. Stull saw fit to email members of the Miner Athletic Club defending Floyd—and to a lesser extent, women’s basketball head coach Keitha Adams—prior to the recent two-game win streak.

In the email, Stull says that “both coaches have averaged 20 wins a season since they took the helm of the program.”

Currently Floyd averages exactly 20 wins per season, with seasons of 15, 18 and 19 wins to go along with this season’s four wins. To maintain an average of 20 wins, the Miners would need to win every game from here on out, including the C-USA tournament championship.

“Twenty wins used to be a good barometer for getting a team into the NCAA tournament, but now the only way to guarantee a bid is to win the conference tournament,” continued Stull, while lamenting the fact that UTEP is a member of a “group of five” conference, along with the American Athletic, Mid-Atlantic, Mountain West and Sun Belt conferences.

In Floyd’s seven years at UTEP, he is 126-90 for a 0.583 winning percentage. His strength of schedule is -0.19, according to sportsreference.com, meaning that in seven years, the overall difficulty of the teams that the Miners have played has been just below average. As stated previously, UTEP has not been to the NCAA Tournament or won the C-USA championship during his tenure.

Other coaches who have been at a “group of five” school for seven years include Tod Kowalczyk at Toledo (MAC), Keith Richard at Louisiana-Monroe (Sun Belt), Bob Marlin at Louisiana-Lafayette (Sun Belt), Jeff Lebo at East Carolina (AAC) and Leon Rice at Boise State (Mountain West).

Only Rice at Boise State has more wins than Floyd with 133. Rice also has one conference championship and two NCAA Tournament appearances, while playing a 2.56 SOS. In his seven years, Rice has only had five players transfer out.

Kowalczyk at Toledo and Marlin at LA-Lafayette have both won one conference championship each, but only Marlin has taken his team to the “Big Dance.” Marlin is also closest to Floyd with 119 wins. Kowalczyk (-1.61) and Marlin (-2.58) have played statistically far easier schedules.

Out of all five coaches, only Kowalczyk (16) has had more players transfer out than Floyd. In fact, out of all coaches in NCAA Division-I with seven years at one school (21), Toledo’s head coach and Oregon’s Dana Altman (15) are the only ones with more transfers out than Floyd.

Despite that fact, Kowalczyk has found success and Altman could be considered the most successful of the seven-year head coaches with four NCAA Tournament appearances. Altman is tied with Colorado’s Tad Boyle for the NCAA Tournament lead.

Floyd’s predecessor, Tony Barbee, was 82-52 despite a 1.74 SOS at UTEP. He took the Miners to the NCAA Tournament and won a conference championship.

However, unlike the election, this decision comes down to only one man—and it appears that maybe he is firmly entrenched.

EDITOR’S NOTE: Prior to Floyd’s first season as UTEP head coach, he did not in fact “bring in” center John Bohannon. Bohannon had actually committed to Tony Barbee and was convinced to stay as a UTEP recruit by Floyd. Therefore, for the purposes of this story, he has been counted as a “Tim Floyd recruit.”