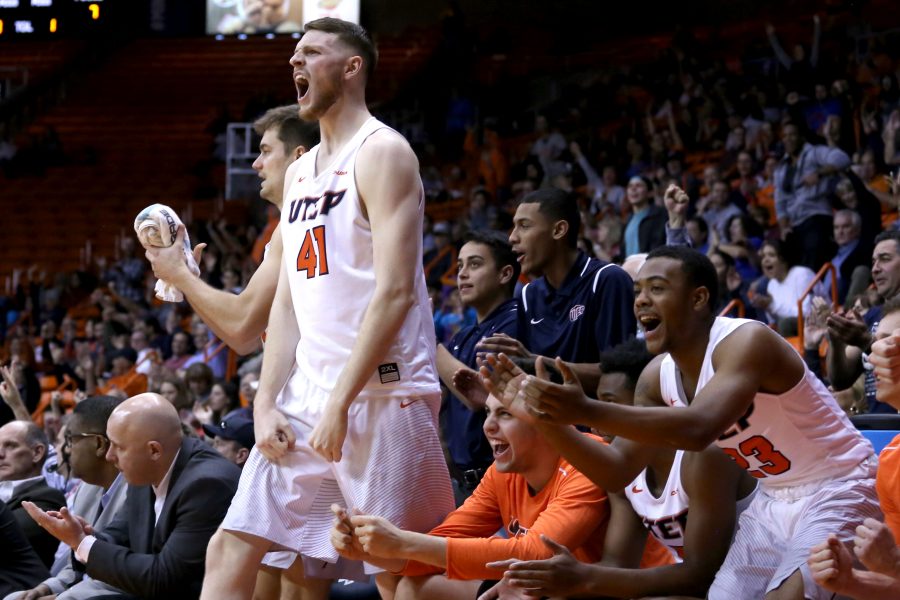 Dominic Artis played 47 minutes of up-and-down basketball, shot 6-of-20 from the floor and had only nine points going into overtime.

But one second changed it all.

The FIU Panthers were leading 87-86 with one second left in double overtime, and it was only an inbound pass left of the game. Forward Jake Flaggert had to toss the ball in. The referee waved his hand signaling three seconds had passed by, so Flaggert was pressed to pass it.

The pass soared across the court and was tipped; game over.

Artis said no. He ripped the ball from the air, quickly planted his feet and chucked the ball to the basket just as the buzzer rang.

Swoosh, the ball cleared the net.

“Being the two leading guards, we [Artis] talk throughout the game, and he was telling me ‘my bad, my bad,’ but I said ‘it’s all good; just make the winning play.’ And he made the winning play,” said guard Omega Harris, who led the Miners with 20 points. “It gave me chills because I told D.A. ‘put them on your shoulders and win the game because you’re the leader,’ and he stepped up and did it.”

In fact, the last second play was originally designed for Harris, who was on the bench because he fouled out in the middle of the second overtime. Artis had to be the one who took the shot.

“I get caught a lot of times overthinking, but I realized it was a simple catch-and-shoot shot that I practice everyday,” Artis said. “Luckily the ball worked in our favor.”

With 17 lead changes and nine times the score was tied, the game went completely back-and-forth between the struggling teams in C-USA.

The Miners opened up with forward Paul Thomas notching an impressive 4-for-4 from the floor and totaling 10 points in the first half. FIU’s bench gave the Panthers the edge, however, as they racked in 18 points at the first break. FIU led the half 33-30.

Midway into the second half, the Miners started to take control. With 12 minutes to go in the game, the Miners spurred a 18-0 run that spanned for just over four minutes. The lead was at once 61-49 in the favor of the Miners.

But, the Panthers were not going to quit. In fact, they whipped up a 17-5 run of their own that lasted until the end of regulation. The Miners even had a chance to put the game out of reach on the free throw line; however, they made only 37.5 percent from the charity stripe in the second half. The Panthers had marched back from a 12-point deficit and tied the game at 66 to send it into overtime.

The first overtime was as hectic as the second half. It featured six lead changes and three instances where the game was tied. The game appeared to go FIU’s was after they hit back-to-back jumpers and led 74-70 with 1:44 left. Harris then responded with an and-one, followed by Artis’ back-to-back scoring plays.

Game tied at 77 for double overtime.

In the second period of extended time, FIU came out on a quick 5-2 run. They started to separate from the Miners and led by a confident four points, 87-83, with only 46 seconds on the clock. But, Artis hit another clutch 3-pointer and forced a turnover on the Panthers’ inbound play.

Next is where the roller coaster of a performance went downward for Artis. He missed a 3-pointer off the inbound and, after Thomas secured a board, he missed a follow-up layup. Luckily for UTEP, the ball squeezed out of bounds following the miss by Artis, and the Miners maintained possession. That’s when Artis drained the last second jumper for the 88-87 victory.

The buzzer went off and a swarm of players from the court and the bench embraced Artis for their first victory since November 18th.

“People talk about our kids not having fun, but they don’t understand. How can you have fun when you are losing?” head coach Tim Floyd asked. “That’s how you have fun—you win. Thrilled to see my players react that way.”

Artis flirted with a triple-double after scoring 18 points, nine rebounds and 10 assists. Nine of Artis’ 18 points came from overtime.

Thomas finished the game shooting 7-of-8 from the floor for 19 points and 11 boards. Trey Touchet also contributed off the bench for the Miners with 11 points. Subbing in for center Matt Willms throughout the game was Kelvin Jones, who contributed with nine points, eight rebounds and three blocks in 21 minutes of action.

“I thought he [Jones] was more effective than Matt,” Floyd said. “He loves to play. Practice has been challenging for him but he has great talent. He’ll get better.”

The Miners (3-13, 1-3 C-USA) not only broke a 12-game losing streak, but also snapped a six-game home losing streak. Next up the Miners will take on Florida Atlantic on Saturday, Jan. 14, in the Don Haskins Center.

And, Artis believes this could be the start of more positive outcomes from the squad.