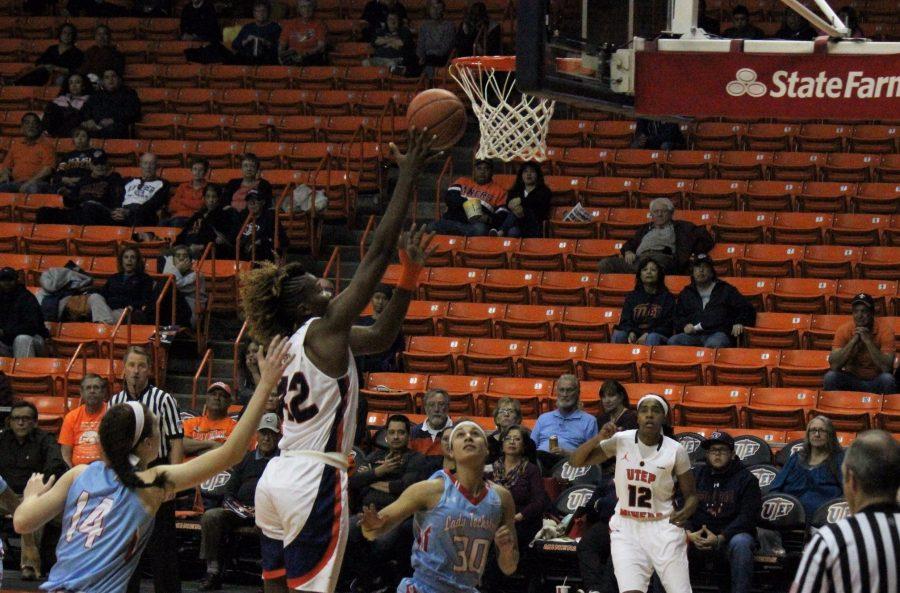 In UTEP women’s basketball second Conference USA game of the year, the Miners handled their business against the visiting Louisiana Tech squad 69-62 on Jan. 5 in the Don Haskins Center. The overpowering height of the Miners was too much for the Lady Techsters to overcome.

To open up the new year of 2017, the Miners found a new gasp of air winning two of their last three games. Now at 4-10 and 1-1 in C-USA, head coach of UTEP’s program Keitha Adams has seen her team’s offensive game step up from the beginning of the season. Against LA Tech (6-7) the young Miners fought their way to their very first victory over a Conference USA team.

In the first half of play, LA Tech seemed to be cruising past the inexperience of the Miners, gaining the early lead for the first seven minutes of the ball game. The lady Techsters’ 3-point shots were the reason behind the lead as the team drained five from beyond the arc and had the Miners’ defense looking for answers.

However, UTEP’s leading scorer on the season Sparkle Taylor led the Miners in the first 20 minutes of play in points (15) and rebounds (5). Her play urged the push for the home team to take over before the halftime break came around, as LA Tech’s lead diminished to a 35-28 lead in favor of UTEP.

UTEP’s defense grew a new understanding on how to limit LA Tech’s offense and with over three minutes before the break, the Miners held the Techsters scoreless. All the momentum was riding with the Miners into the locker room.

When the Miners truly ran away with the win was when the third quarter took place. UTEP gained their biggest lead of the game, 45-33, with 5:55 remaining in the third quarter. It happened after a flashy assist from UTEP’s Lulu McKinney to Najala Howell. The Miners never looked back from that point on despite a late surge from LA Tech. Howell’s seven points alone in the third period were lethal to the already big advantage the Miners were enjoying from their bench.

In the game, UTEP’s bench outplayed LA Tech’s bench in every aspect of the matchup. The Miners gained 23 points from their reserves, compared to the 3 points from the Techsters’ bench. And to make matters worse, LA Tech’s reserves went 1-for-10 from the field and totaled only four rebounds in the game. The already worn out Tech ladies were forced to keep their starters in due to the fact that their reserves were nonexistent at the Don.

In the last four minutes of action, UTEP’s offense went cold and could not buy a bucket. The Miners’ offense collapse started when Taylor was forced to watch from the side as she fouled out. Taylor’s hot night of 25 points, which earned surpassed her for over 1,000 career points and eight rebounds were missed to closing out the game earlier in the evening.

“Sparkle played her best defensive game of her career. It was such a great defensive effort by Sparkle, she had steals, played hard on both ends and played with great effort,” Adams said. “1,000 points is a lot of points, but I never worry about her offense. It’s always there. I just challenged her on the defensive end. What a great night to earn 1,000 points. I’d give her defensive player of the game along with that.”

Regardless, LA Tech’s time at a comeback win was growing short and they turned their hopes into misses at the free-throw line from the Miners. But UTEP did not hesitate to nail the clutch free-throws, going 21-for-29 at the line.

The longer Miners got opportunity after opportunity on the offensive end of the court. Adams saw her team shoot a poor percentage throughout the night (36 percent and 21 percent from the three) but it almost didn’t matter, as UTEP’s length was rewarded with 46 rebounds and 16 coming from the offensive glass.

“We put a new rebounding rule with our team, and that is out rebounding every team by at least seven every game. Tonight we did it by 11,” Adams said.

This win had coach Adams joyfully trotting to the post game interview session saying, “this win feels so good.”

“We needed this win, they needed it. For a couple of days, I had a hangover from that San Antonio game. The ladies played hard today, they were ready to go, we played tough defense and I’m just really proud of their effort tonight,” Adams said. “We are going to enjoy this tonight, and tomorrow out focus will be on Southern Missouri.”

On Jan. 7, the lady Miners will welcome in Southern Miss to the Don Haskins Center. The game is set to tip-off at 2pm.