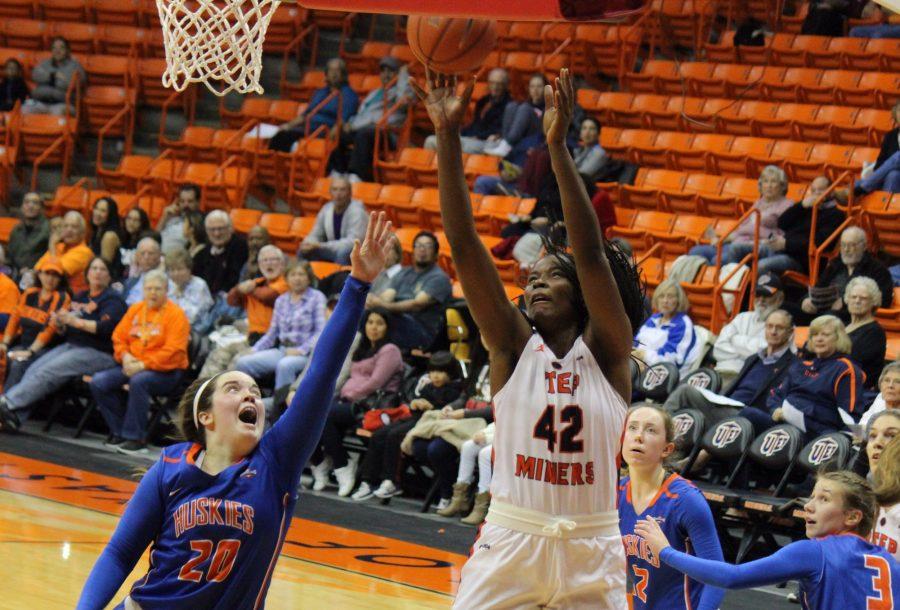 UTEP women’s basketball came into their matchup against Houston Baptist with a three-game losing streak, and with a 1-5 record. This, in fact, was the program’s first record below .500 within the first six games since the 2004-05 season. However, the Miners came out victorious for just the second time this year on Wednesday, Nov. 30, in their 75-45 win against Houston Baptist. They overcame the Huskies’ lousy offensive showing, and prevented any comebacks from the now 1-5 HBU team.

UTEP women’s head coach Keitha Adams inched a little closer to victory No. 300 under the Miners’ program, notching her 278th win at the Don Haskins Center. But, more importantly, her slow start to the year was answered on the hardwood against HBU.

From the start of matchup, Adam’s group was hounding the Huskies from the defensive end of the court and they never let up, as the Miners did not trail on the scoreboard for a single second.

UTEP forced 13 first-half turnovers on HBU and a cold shooting percentage of 33 percent. The Huskies only managed 27 points in the first 20 minutes of action and did not share the basketball much with only six assists, compared to UTEP’s 15 assists on 15 shot attempts.

The Miners’ offense accumulated 38 points before the halftime break, and their percentage from the floor was nearly 45 percent. Forward Tamara Seda contributed 11 points, and the Miners’ leading scorer this season, guard Sparkle Thomas (13.8 points per match), added in 11 as well and nearly hit her average at the half. HBU did not have a scorer in the double-digits until the second half of play.

Throughout the game, UTEP played bully-ball down on the block, outscoring HBU 40-12. Needless to say, Adams’ unit is at their best when they drive the ball and when they put more emphasis from the inside rather than from the 3-point arc. From long distance, the Miners only connected on two buckets from that range.

“We got the ball inside to the post more tonight, and got some easy baskets due to that. I’m very proud of this team for getting the ball in the paint,” Adams said.

UTEP scored over 70 for the second time this season, and their offense looked in sync for the first time since the Western New Mexico win on Nov. 17, when they hit over 90 points as a team. Their offense hit 26 field goals in the game and the Miners assisted on almost every one of those with 24 assists as a team.

“One of the most important lessons we learned from the Virgin Islands was passing the ball. In that three-day experience it really opened our eyes to not take quick shots, bad shots, to trust each other, and sharing the ball and moving the ball more,” Adams said. “When we pass the ball like we did tonight we are better offensively. I’ve really been talking to the team about our turnover: assist ratio—we had 24 assists to 12 turnovers tonight. And our offense tonight looked more like what we’re trying to get to.”

The Miners’ few upperclassmen on the roster carried the load for their team. Taylor continued her much-needed scoring for this young Miners’ squad; she had 21 points tonight and made the Huskies scratch their heads every time she nailed jumper-after-jumper. Junior forward Tamara Seda was vicious on the glass all through the game and earned the team-high in rebounds with 15. Junior starting guard Lulu McKinney was the only player in blue and orange to achieve double-digit assists with 10 against HBU.

One of the biggest reasons for concern with Adams’ group is the play of her underclassmen given there are nine first-year players on the 14-women roster. Tonight the whole team stepped up and answered some of their critics, however.

Transfer forward Axelle Bernard recorded the fourth-most blocks in school history, with seven denies. This helped her team’s performance against HBU get in the record book with the program’s fifth-most blocks ever (12).

The team will have 10 days off before their next matchup against New Mexico on Dec. 11.

“It was a key win for us tonight. For them to have 45 points—I’m really proud of both sides of the ball tonight. Great team win and we really needed this. We just need to keep working hard and keep practicing,” Adams said. “Our team has overcome some adversity with a bloody nose. We traveled over 6,000 miles and came home and played pretty quickly. So I think this was a good test for us, but we have to keep on working on some things before the second semester comes.”