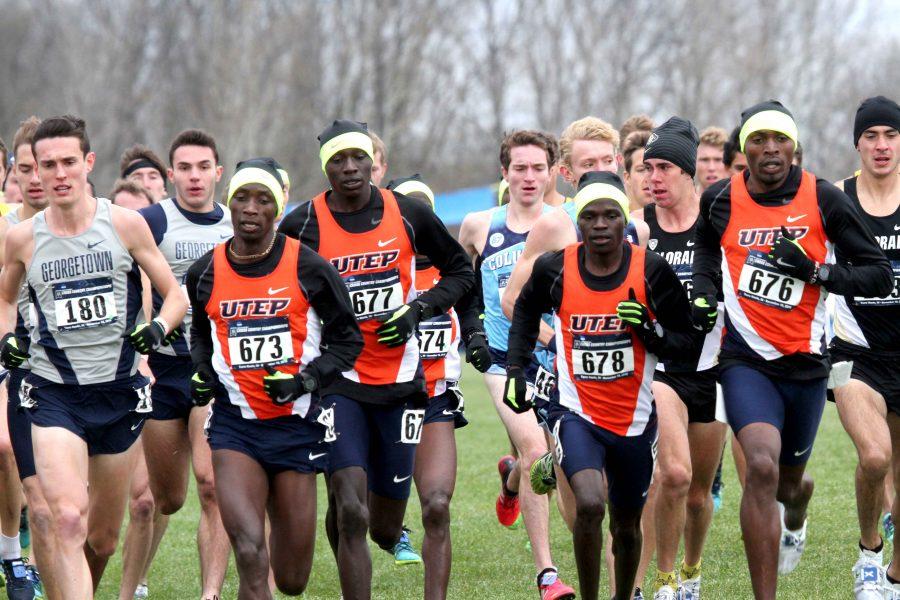 Sophomore cross country runner Antony Kosgei (#678) was named to the C-USA Honor Roll for his excellence in the classroom.

One of UTEP’s cross country runners has enjoyed triumph on both sides of the spectrum, on and off the field. His name is Antony Kosgei and he is currently a sophomore majoring in environmental science.

Kosgei comes from Eldoret, Kenya, and has close to a perfect GPA, with a 3.78 average.

He has made the leap from his hometown lifestyle to the American lifestyle in great fashion. Being a member of the Conference USA’s Honor Roll is a privilege many could not add on to their resume, but he has accomplished that goal in 2016.

UTEP was an easy decision for Kosgei. His coach Paul Ereng and the majority of his teammates are also from Kenya. They have brought a feeling of home to the young cross country athlete.

“What brought me to UTEP is the opportunity for an education, and to measure my athletic talents, but the most important was my future and to get the highest education possible,” Kosgei said.

He started his running career two years ago, so his experiences have been as long as some of the other athletes in the college sport. His dedication and will to get better have put him up there with some of the best on the team.

Last season, Kosgei helped add another conference title in UTEP’s history books, which was their sixth in 12 years with Conference USA. It was their first since the 2009 season, and he placed in sixth throughout the event with a time of 24:53.

His work has translated into his second year with the program, as the Miners have gone back-to-back with the title in their possession in C-USA. In his last year of being an underclassman, Kosgei has reached great heights in his running performances. Kosgei’s conference running was impressive as he finished third for the Miners and fifth overall.

During the Mountain Regionals, he was the second Miner to cross the finish line, and good enough to snag a top-15 spot in the invitational, with a time of 31:12.80.

The sophomore finished off his athletic year strong and will look to do the same in school since the semester in winding down.

“It’s a great opportunity to be a student-athlete. I didn’t know if I had the opportunity to continue my education after high school. I thought this would be the best chance for me, and it has been the best of both worlds,” said Kosgei. “Running is physical and takes a lot of work, and you become more active. I think it transfers to academics for me. School has become easier for me, I’m more motivated.”

Learning curves are known to be difficult because it’s the value of picking up new skills, experiences, languages and a way of life. Being from Kenya and traveling to the United States is a difficult transition for anyone. However, with Kosgei one could not tell by just glancing at his grades, skills and the efficiency in his work. He changed majors from computer science to environmental science, and has overcome the shift of classwork he has been receiving.

“When I came here (UTEP) my first year, it was a bit difficult. I could not understand some of the accents from my professors. I wasn’t used to the exams that are taken here, and running plus school at the same time was a little uncomfortable for me at first. I was not used to it yet, but I kept on pushing and working hard,” Kosgei said. “Over here we a lot more technology, compared to the manual work in Kenya. So there is a more learning materials here at UTEP though.”

Traveling is a must for a student-athlete in every sport. Cross country requires just as much time on the road as any other collegiate sport.

UTEP’s team has had eight events to attend throughout the season and only one has been in El Paso. This means every weekend for the cross country players is time away from their resources and homes. And with the success that Ereng and his group have tasted, they are putting in maximum effort on both the field and with their studies. It’s not easy doing work on the road, especially if the team’s focus is on winning an invitational.

Regardless, Kosgei has found a way to keep up with the demanding life of a college athlete.

“I’ve tried as much as possible to use my time wisely. I would have my timetable of when practice was, and when I should make time to study,” Kosgei said. “The thing that helped me out a lot is I never gave up and I kept trying. I would run everywhere from practice to class, to the study halls and meetings. It’s a lot of busy days for me.”

Kosgei hopes to be a great role model for everyone and for the younger runners, who have yet to arrive, as he has gained a lot of from the experiences of his older teammates.

After two more years, Kosgei will call it a career in cross country, but he wants to make a major impact through his junior and senior seasons. He has a lot in mind and has never taken for granted who has helped him get where he is now.

“My coaches, teammates and professors have been with me through it all. The coaches have given me an opportunity. My team has helped me every time, advising me when I need it, telling me I’ll be fine,” Kosgei said. “My teachers have been very understanding. When I have to miss classes, I’ll email them to ask them if I missed any notes, or homework or anything important. They are all so helpful.”

Planning for the future is not always the easiest aspect of life because there are so many unanswered questions, but Kosgei knows what he is working toward. He wants to continue his education when he completes his bachelor’s degree at UTEP and strive for a master’s degree. Meanwhile, he has not thrown out the possibility of pursuing his talents and making a career out of his running abilities.

“If I can combine both academics and running cross country in the future that would be my greatest goal that I could ever imagine,” Kosgei said. “I want to be remembered for always doing my best in everything. I want to maintain my GPA, and maybe be an example to others in a few years.”