Aaron Jones­­—to the NFL or stay at UTEP? 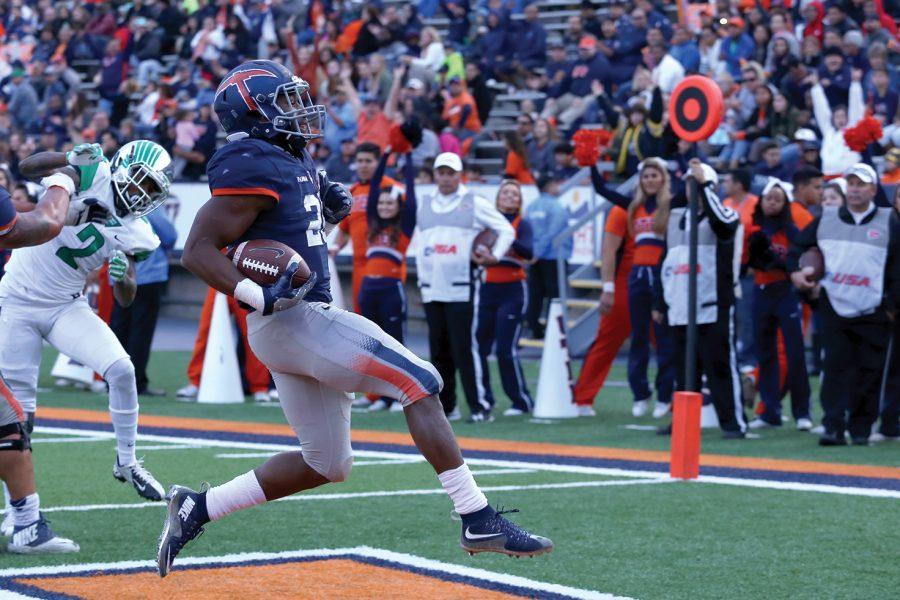 After they capped their 52-24 victory over the North Texas Mean Green, a wave of seniors stormed the field in excitement over their team’s victory.

It was their last game wearing the orange and blue uniform and they stayed after the fireworks shot off to celebrate their last minutes as Miners. There among the celebrating players was the man of the night: Aaron Jones.

He had just come off the greatest game of his entire career, rushing for 301 yards and three touchdown hauls from 83, 48 and 53 yards.

And after all the hugs and celebrations with fans, fellow teammates and coaches, Jones walked up the Sun Bowl steps into the locker room, possibly for the last time.

It wasn’t the junior’s senior day on the night of Nov. 26, but due to his exceptional performance throughout the season, applying for the NFL draft is definitely in the back of Jones’ mind.

When all the post-game antics have unfolded and the media pressed the question about his future, Jones was blunt about the difficult answer to his future.

“I don’t know yet,” Jones said. “I’ll have to talk to coach Kugs (Kugler) and have a sit-down talk with my family to see what to do next.”

His brother and teammate, linebacker Alvin Jones, did not have an answer for Jones’ situation either.

That opportunity is the same one in which head coach Sean Kugler has been a part of throughout his 26 years as a head coach. Kugler, who has dealt with players at the NFL level when he was the offensive line coach for the Pittsburgh Steelers, understands players at the professional level and what it takes to get there.

Last week, the question about whether or not Jones should test the NFL waters was thrown Kugler’s way. Kugler responded truthfully to this, suggesting that if his grade is high enough, Jones should really consider the draft.

“Kids do have the ability now to look for a draft grade without expiring their eligibility. And really, I would probably encourage Aaron to do that, to see where he stands,” Kugler said. “If Aaron had a first-round draft grade, I would be the first one to tell him to come out because it’s an opportunity that you really can’t pass up. If it comes back that he’s not going to be that, then we’ll sit down and have a discussion and talk about his future.”

Although Kugler would love to see his star player succeed at the professional level, he would miss Jones dearly on the team.

“I would love Aaron Jones to stay here,” Kugler said. “Not only is he a great player, he’s a leader, he’s one of the hardest workers that I’ve been around. I’m the biggest Aaron Jones fan in the world and I want him to be successful. I’m not the one who’s going to be selfish and stand in his way.”

When Jones came off his 300-plus yard game against UNT, Kugler had only one short statement about his future with the Miners.

“I’d recommend he stays,” Kugler said, almost foreseeing the greatness Jones can continue to bring to the squad if he decides to stay for his senior campaign.

The first quarter of the game became another milestone for Jones as he rushed for 127 yards to beat Donald Buckram’s 2009 program record of 1,594 yards and became UTEP’s single-season rushing leader.

The game also brought him up to third in the nation for rushing yards with 1,773 total yards this year.

“I definitely think this was (my best game),” Aaron Jones said. “That’s the most yards I ever rushed for. I’ve always wanted to rush for 300 yards in a game. That was amazing.”

And when he crossed the 300-yard mark, it was all smiles on the sideline for the Miners.

“They said he needed four more yards to get 300, and collectively, as a team, we rallied around that,” tight end Hayden Plinke said. “We were all pumped for him.”

“I hate to say this, but I’m glad he was hurt during my senior season (in high school) or else would have killed us,” Metz said. “It’s amazing what he can do and I can’t say how proud of him I am.”