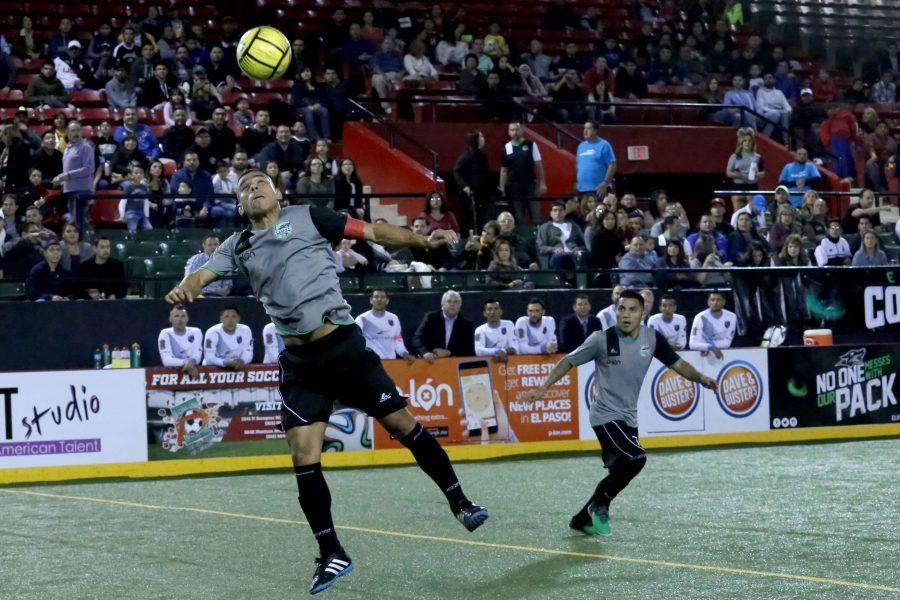 The crowd never thinned and never wavered on Saturday night at the El Paso Convention Center on Saturday, Nov. 26, but the “Si se puede” chant would only bring the Coyotes to within three goals of the visiting San Diego Sockers before three late goals sealed the deal. The Sockers, who are currently second place in the MASL Pacific Division at 4-2, defeated the still winless El Paso Coyotes, 12-6. The Coyotes fell to 0-4 on the season.
The star of the first half was clearly San Diego forward Max Touloute who scored four goals, which were each more sensational than the next. The “Haitian Sensation” would end the night with five goals. The Coyotes looked inexperienced and disjointed throughout the first half, even scoring an own goal to make it 8-1 heading into halftime.
Coyotes defender Leobardo Siqueiros said following the game that the team is still young and trying to find their feet.
“We always think positive, because we’re barely learning. One of the things is, in this kind of a game we can score quickly so we just put our heads down and keep going until we catch up,” said Siqueiros.
Whatever changes were made by El Paso coach Hector Eugui at halftime seemed to work for the most part and reignited the team and the fan base – which filled a large portion of the available seats in the coliseum. As the music played over the speaker system the team began to pick up the pace from what had been a somewhat stagnant offense to a much more fast pace offense.
“Since we were losing, it’s time to go pressure – pressing. That’s why we looked different in the second half,” Siqueiros said. “We should work on that. We’re still working, finding our kind of play.”
Whatever it was, was definitely working as the Coyotes scored five unanswered goals to find themselves within three, 9-6, with six minutes left to play. El Paso forward Andoni Eugui, who scored the fifth of the six goals, praised the crowd for the boost in the Coyotes play.
“I think that the people make us effort the way that we do – because without them, we are just players,” said a grateful Eugui.
Unfortunately on this night, the effort fell short as the Sockers went back to the suffocating ball control style that had netted them a nine goal lead initially. Three more goals followed before the final horn sounded but, the fans seemed to go home happy. The Coyote effort was deemed acceptable by all and that amount of goals in a soccer match is always a crowd pleaser.