UTEP drops final game of the season to NMSU 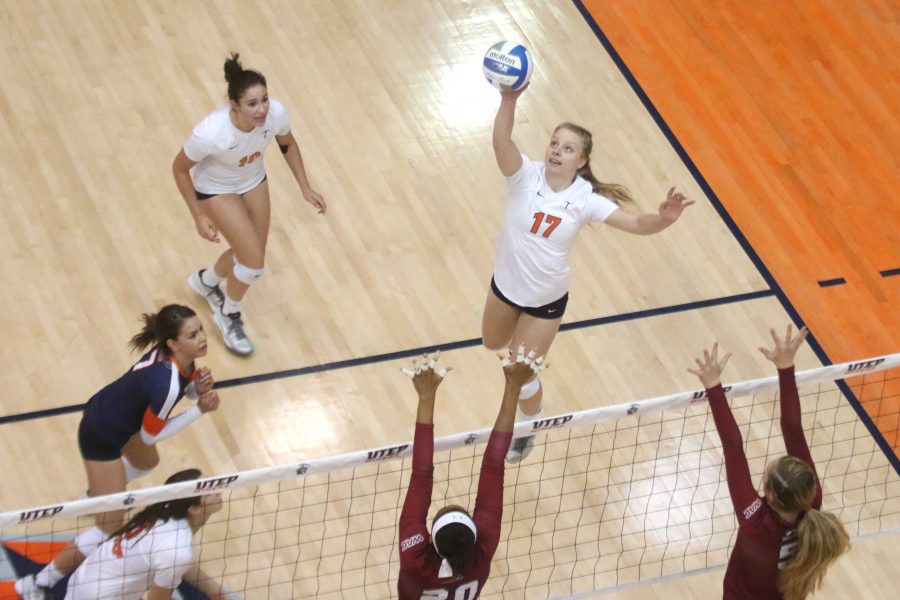 It was also the last game that seniors Tatum Winter, Lindsey Larson, and Sarah Villa would put on a Miners jersey.

“I feel that our team has grown so much since the beginning of the season until now,” said head coach Holly Watts. “These seniors have left a legacy. We have gained more respect from our opponents which is something we didn’t have at the start of the season.”

The first set was intense with the Miners and Aggies trading off point-for-point. The Miners had the upper hand, leading 11-9. But, the Aggies responded in the following set making it 10-11. The Aggies made adjustments to get right back in the match. Diana Orozco of UTEP had back-to-back default serves, which caused the Miners to be down 20-24 in the first set. The Aggies capitalized on the opportunity and won the first set of the match 25-20.

The Miners opened the second set with three-straight points after the Aggies scored the first. The Miners were up 3-1 but the Aggies adjusted and came back to lead the set, 5-3. After trailing as much as four points, the Miners caught up with the Aggies at 13-all and forced the Aggies to take a timeout to regain composure.

It was Larson’s key three digs that lifted the Miners to a 25-18 win in the second set.

She finished the game with 19 digs to end her senior season. Larson has made big contributions to the team this season with 302 digs for the year.

“Looking back, we have improved some much as a team. We left in all out on the court. I can’t be upset with how we played tonight,” Larson said. “We had a legacy platform set up at the beginning of the season, we just wanted to improve to the ‘good team’ that we know we could be. I think the teamwork this year was the best teamwork in all the four years I have been here.”

After the intermission the Miners continued their domination in the third set leading 4-1. However, the Aggies somehow regrouped and tied up the set at 4 points. Both teams exchanged scores, but still the Miners trailed 9-12.

Set three was intense with 13 ties throughout the period. The teams were tied at 22, but the Miners prevailed late and the Aggies found themselves down 24-21. UTEP notched the final point to win the set 25-23.

Despite having ended the third set with the advantage, the Miners were down 3-7 early in the fourth set. They were inching their way back into the game, but Aggies kept the momentum, leading the Miners 10-5.

“I’m sad we didn’t win in four,” Watts said. “We had some opportunities to win in the fourth set. But it’s a great spring board into the spring training camp.”

With set four slipping through their hands, the Miners started the fifth set down 2-5. The Aggies began to pull away in set five with being up as many as five points throughout the set. But, the Miners came back with a definite response.

Midway through the fifth set, Villa had a key dig and was announced the school’s all-time digs record holder. She contributed with 26 for the game and 559 for the season. Despite the record breaking news, the Miners could not gain the momentum to take the lead. They lost the final set of the match 12-15.

“She was a freshman my first year here,” Watts said. “It just shows what kind of work ethic she has. It’s been great to watch her grow as a player. It was great to be a part of her success.”

“We have to be able to replace those players,” Watts said. “We’re excited about our signing class. They are a young class, that we plan to groom for better success for next season.”