Basketball gets upended by Southeastern Louisiana 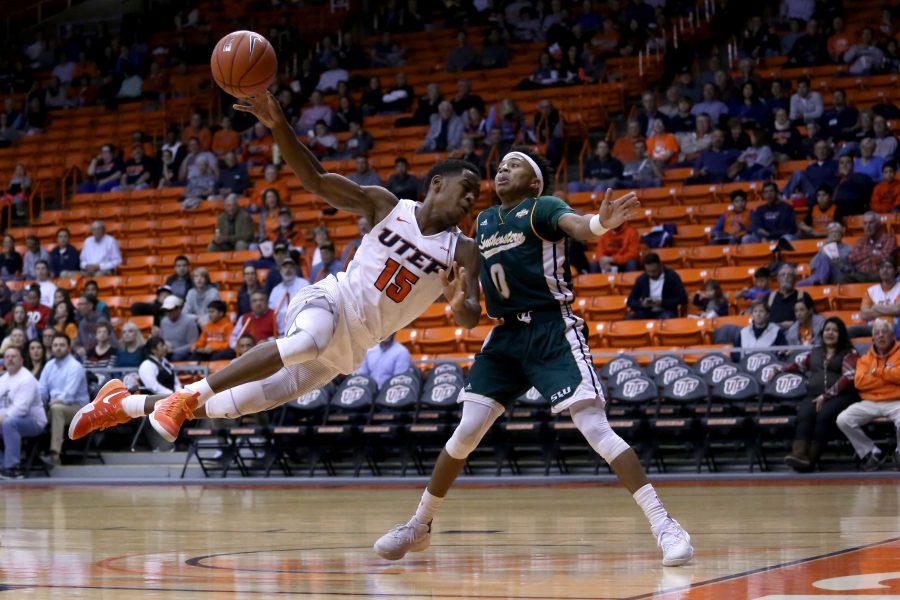 After the UTEP men’s basketball made their debut in the Gildan Charleston Classic, they battled their way to 2-2 on the young season. The Miners beat an impressive Western Michigan squad, 85-75, and went toe-to-toe with Mississippi State where they came up short, 61-54.

But when they came back home to defend the Don Haskins Center, on Wednesday, Nov. 23 against the Southeastern Louisiana Lions, they did so unsuccessfully as UTEP could not overcome the Lions, 72-56. The Miners lost their first game in program history to the SELU team, and fell to 2-3 on the 2016-17 year.
“We got manhandled by Southeastern Louisiana. They looked like they should have been wearing Miners’ jerseys out there,” head coach Tim Floyd said. “The Lions were better than their name, and we knew that, but they were still the better basketball team than us.”

In the first half of play, UTEP controlled the scoreboard for the first four minutes of the game, but struggled to stay true to the lead as the Lions led the rest of the period, and eventually the rest of the matchup.

SELU came in with an attitude to stop the Miners’ big men with a 2-3 defensive front. And, to make matters worse for the Miners, starting forward Terry Winn was inactive. It was safe to state that his presence was missed dearly.

SELU led 42-27 after twenty minutes of action. The home team gave little to nothing to cheer about. Frustration mounted fast in the Don Haskins Center as the Miners could not find the bottom of the net for the last 6:48 of the first period.

UTEP’s offense was forced to jack up the 3-point shot more than they have all season in the first half. As a team, they attempted 10 from beyond the arc, while cashing in on only three of them. It was the most 3-point shots in the first 20 minutes of the Miners’ season.

Floyd witnessed a stagnant offense at times as his unit went scoreless for more than three minutes on two instances before the halftime break, and did not cumulate a double-digit scorer. Trey Touchet led the scoring charge with only six points to show for, compared to the Lions’ starting guard Marlain Veal who found himself with 11 points added at the break.

UTEP is used to huge production from their play down low this season, but the Miners were outscored 22-10 in the paint.

Rebounding was also a problem needed to fix before the second half came around. SELU was in complete control on the glass. The rebounding margin was 24-17, and the Lions sneaked their way for seven offensive boards, which aided the Lions’ attack for seven second-chance points.

However, the home team limited their turnovers in the first half, and did not cough up the rock more than ten time, which they have done the first four games of the year. There were seven turnovers from both sides, but UTEP gave up 11 easy points from their mistakes.

When the two units stepped back on the court, UTEP was desperate to fight off the smaller named school as the sense of urgency was shown on every players’ face for the Miners. UTEP opened up the half on a 7-2 run, but their closest distance on the scoreboard was nine points.

Floyd’s team was running on empty trying to recapture the lead. They could not get over the hump, and even trailed by more than 15 points at times during the second period. The lane was clogged all night—SELU executed their game plan close to perfection as they stole one from UTEP.

Starting center for the Miners Matt Willms was the first scorer to eclipse the double-digit column with 11, as he was clocked in for his most minutes of the season with 25 minutes. However, his foot injury is might be creeping back up.

“I don’t know what’s going on with Matt. His shoe was off during halftime in the locker-room. He did not play with the same burst and speed that he played with over in Charleston—he was not the same guy out there. I’m worried and concerned about him playing through whatever he’s dealing with,” Floyd said. “He played three games in four days. It’s a lot for him, especially coming off an injury that ends a lot of people’s careers.”

Coming into the game, Dominic Artis led UTEP in all major categories—averaging 16.8 points per match, seven rebounds, and 7.8 assists per contest.

Against the Lions, however, Artis had his hands full on the defensive end as Marlin Veal ate up the defensive schemes thrown at him all night from Floyd and his team. Veal contributed 18 points, seven boards, and five assists to his teammates. His play slowed down the hot start to season for Artis who could not seem to get going, and he only threw in 10 points, five rebounds, and five assists.

“Their ball-handlers did whatever they wanted with us. Their guards got by us all night,” Floyd said. “I thought their guard play was much better than ours, obviously.”

UTEP as whole shot the ball 35 percent from the field, and could not contain the Lions as they hit nearly 50 percent from the hardwood. The Miners got to the charity strike more, but did not capitalize from the line, going 9-17 (53 percent).

The Miners’ guards were not up to par in Floyd’s mind.

“Offensively we were just inefficient. Our perimeter play, between Dominic, Omega, Touchet, and Deon Barrett went 12-34, it’s hard to win games like that,” Floyd said. “Most of them were bad shots being taken. I would like to think we are better than that.”

SELU continued their board-hungry night, and outmanned the Miners all evening, 47-33. UTEP only had two athletes with over five rebounds, which were Artis and Paul Thomas.

Floyd was well aware of the margin his team gave up in front of their home court.

“They (SELU) out boarded us by 14, they were quicker to the ball, and more physical than our guys,” Floyd said. “There was no juice from us after the misses.”

Overall, the Miners took care of some of their flaws on the defensive end, but could not score enough to keep pace with the Lions. UTEP will have nine days to rest before their next game against Northwestern State, and they will need every bit of their time, according to Floyd.

“Tonight’s game shows who we are right now, and we desperately need those days to get right. It’s very important for our team,” Floyd said. “We’ve got a lot to work, and we will continue to work on those things.”