Miners run away from WNMU Mustangs 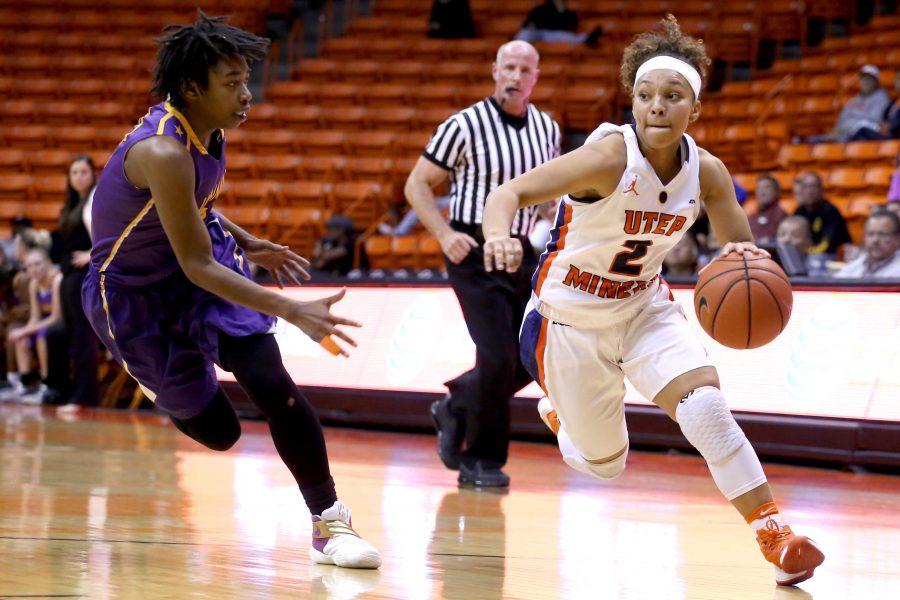 The UTEP women’s basketball team (0-2) came out on Thursday, Nov. 16, trying to avoid their second worst start under 16-year head coach Keitha Adams and emphatically put an end to their losing streak with a 93-46 win over the visiting Western New Mexico Mustangs.

From the start, the defensive pressure from the Miners was suffocating and the dramatically undersized Mustangs (2-1) did not score for almost the entire first quarter as UTEP opened up in a full court defense and allowed only six first-quarter points. The Miners used their size to out-rebound WNMU 14-3 in the first period.

For the game, the Miners out-rebounded the Mustangs 66-21, which was a school record in rebounding margin and most rebounds in a game. Needless to say, Adams was very pleased with her teams’ effort on the glass.

“That’s been something we’ve been possessed about and we’re going to keep working on it and it’s only going to get better,” said Adams with a smile.

The Miners looked decidedly more physical than they have in the previous two games and scored 58 of their 93 points in the paint. Perhaps even more telling of the team’s physicality in the middle—even more than the 66 blocks if possible—is the fact that the Mustangs scored zero points in the paint the entire night.

“In practice we worked more on our defense, which it was better in the game this go-round,” senior guard Sparkle Taylor said. “We definitely rebounded better.”

The Mustangs had come in shooting .459 percent as a team and were making more than one-third of their shots from behind the 3-point arc. After being thrown off rhythm all night by the UTEP defense, the Mustangs shot 22.4 percent and were 8 for 33 from the 3.

The Miners, who had been ice cold shooting the ball so far this season, seemed to find their touch as an entire team on Thursday night. Although freshman forward Zuzanna Puc led the way with 19 points, she was one of six Miners to score in double digits. Out of 13 Miners to see minutes during the game, only two came away without a field goal and one of those, freshman guard Rachel Tapps, did not have an attempt. Tapps did have one of the Miners’ 26 assists on the night, however.

Coming into the game, UTEP had made 43 field goals between their two losses combined to go along with their .333 field goal percentage. Against WNMU, the Miners made a total of 41 field goals on 67 shots. To say that UTEP improved in every facet of the game compared to their previous two losses would be an understatement.

Following the losses to Northern Arizona and Texas Southern to start the season, Adams had the team back in the gym as usual, even twice a day at one point. But, for a young Keitha Adams team, the work never stops, even after a record-breaking performance where it appeared that every single thing was clicking; especially when the Paradise Jam with LSU, NC State and Kansas State are right around the corner.

“I’m pleased with them today and tomorrow we’re going to crank it out,” said Adams.