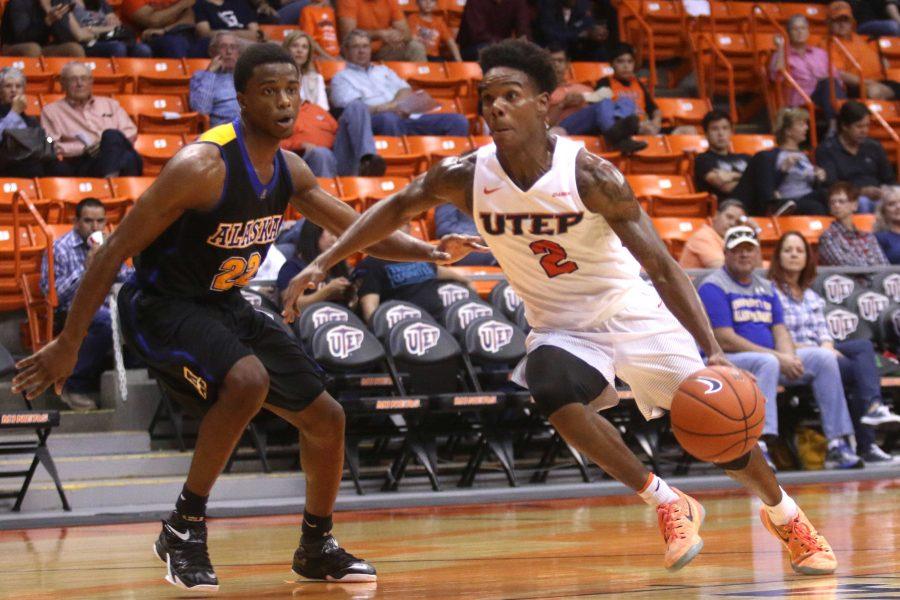 UTEP earned back-to-back victories at the Don Haskins Center to start their young season with a hard fought 87-85 overtime battle against Alaska Fairbanks on Saturday Nov. 5.

Even though the Miners struggled throughout the game and needed overtime to overcome Alaska, the El Paso fans still witnessed their team will their way past UAF before the regular season starts.

The Miners trailed early to start their afternoon off with a seven point run by Nanooks right when the ball was tipped-off. Alaska’s Bangaly Kaba caught fire quickly, connecting on his first three shots, and getting to the charity strike, which gave him nine points against the sleeping Miners’ defense.

In the first half of play, the Miners did not lead on the scoreboard once. UTEP’s offense was stagnant, with eleven turnovers totaled. The Nanooks capitalized on these mistakes made by the Miners, and cashed in with nine points off turnovers.

UTEP’s defense forced Alaska to cough up the ball eight times in the first twenty minutes of action.

Terry Winn carried the scoring load and found himself to be the leading scorer from both teams, with 13. He went 4-for-6, and made all five of his attempts from the line.

In the first half Matt Willms made his first appearance against another team since 2014, and he played more than half of the first half, with eleven minutes logged in on the court. He shot a perfect percentage from the field, going 3-for-3, and putting up eight needed points for his club.

Head coach of the Miners Tim Floyd was just as excited as his players to see Willms back in uniform.

“It was so nice to see Matt Willms back on the court,” Floyd said. “We’re a better team with him.”

Getting to the line was crucial for UTEP to keep up with the high soaring Nanooks in the first half. The Miners forced their way to free throw line 17 times, but making only 12 when they had the opportunity. Alaska Fairbanks was more efficient, making 7-of-9 free throws.

Overall in the first, Omega Harris’ presence was missed dearly by the team—his ability to heat up was starved for. Going into the half, Alaska Fairbanks led on the scoreboard, 40-36, and the Miners were outshot by ten attempts.

However, when the two opponents stepped back on the floor, UTEP looked to pick up their intensity and give their fans something to cheer about. They collected their first lead of the game with 13:15 in the second half after Jake Flaggert and Dominic Artis found their three-point stroke on multiple occasions.

Head coach of UTEP Tim Floyd tried to execute the height mismatches more than usual. His team took advantage of the smaller Nanooks, who did not have a player over 6-foot-7. UTEP bullied their way down low, foutscoring the away team 44-18.

Regardless, the three-point shot was deadly for the Nanooks, the Alaskans connected seven of their long range shots, compared to none by the home team in the first period, and 15-3 throughout the whole game.

The bench points were even from both sides, with 27 each, and both Willms and Omega contributing ten points each. Trent Moleswoth added in twelve from the Nanooks’ backups.

Omega Harris made his game-time debut in the second half, and to say the least, his timely buckets could not have come at a better time. Along with his usual scoring, he threw in three rebounds, three assists, and one block in twenty-three minutes of play.

UTEP still had the turnover bug after the first half. The offense gave up the ball more in the second half than they did earlier in the game, they totaled with 23 on the evening, and six of them were by the starting point guard Dominic Artis.

“Taking care of the ball is our biggest emphasis, without a doubt,” Artis said. “Mine especially, being the point guard, the floor general, I have to trickle that down to the whole team.”

Artis finished the night with twenty-five huge points, and 19 in the second period of play. He was the only twenty-point scorer for the Miners.

As the nine-minute mark approached, it looked like the Miners were going blow the roof off the arena with some exploding dunks from Kelvin Jones, and with Terry Winn continuing his stellar performance on defense.

But, the Nanooks responded quickly, shooting the three-point shot religiously. This took away the seven point lead the Miners held.

Back and forth the matchup was, with no team wanting to leave with their first blemish on the year. The Nanooks took the grasp of the game after the steal by UAF’s Brandon Davis, which extended Alaska’s margin to four with a minute left in regulation.

The Miners hopes to stave off the smaller school was looking bleak until guard Trey Touchet hit his only basket of the game—the biggest shot of the year for the Miners, so far. It was a three-point bucket, followed by a foul. He went to line, with the game on the line, and hit the free throw that would send the Miners into overtime.

Tied at 74. Matlock knocked down two of the the Nanooks’ 3 three-point makes in extra time. Matlock seemed to put the dagger in the Miners’ heart, when he jumped Alaska’s lead to five with two minutes left.

But the hero for UTEP, senior point guard Dominic Artis, scored eight crucial points in the deciding last five minutes of the game, and tied the game up at 85 when his jumper hit the bottom of the net. He also iced the game, nailing two free throws to end the Nanooks’ hopes at the upset, thus giving UTEP the lead 87-85 with 0.1 left on the clock.

Nonetheless, UTEP men’s basketball will view these games as baby steps for the long-upcoming season ahead. Floyd said this Miners team will need to limit turnovers, get Willms back to 100% as soon as possible, and work out their kinks defensively.

Even with the win, Floyd knows his team needs a lot of work if they are going to compete in a tough Conference USA this year.

“Just come and watch us grow. The fans saw some exciting ball, although it was not as pretty as everyone wanted,” Floyd said. “We just need to grow with all these guys, and we will.”