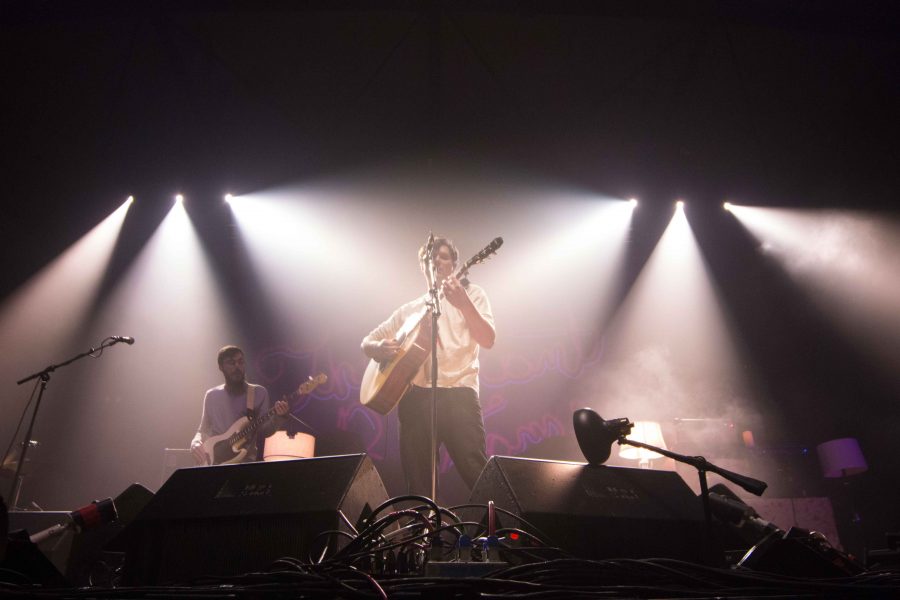 Rock band Brand New made a stop at the El Paso County Coliseum Thursday, Nov. 3rd and brought younger pop-punk bands Modern Baseball and The Front Bottoms along for the ride. The tour was set up to promote Brand New’s fresh merchandise—a series of T-shirts that allude to the band’s breaking up in 2018.

With the exception of a few fan favorites like “Okay I Believe You But My Tommy Gun Won’t” and “Sic Transit Gloria…Glory Fades,” the set list was taken straight from their 2006 album “The Devil and God are Raging Inside Me.”

The 2006 album is not as straightforward as “Your Favorite Weapon.” Most of the tracks start slow with a whiny guitar and bass while lead singer Jesse Lacey milks the microphone. During the concert Lacey focused on cryptic lyrics, but when the chorus hit Lacey reminded the crowd he still deserves to be in the post-hardcore genre of punk they all grew up playing.

Audience members who dozed off during interludes like “Sowing Season” and “You Won’t Know” were shaken awake when the cruxes of the songs wailed from the speakers. “Limousine” is a perfect example. The audience took advantage of its slow start to catch up on conversation, but by the time the reprise hit everyone was screaming those ubiquitous lyrics “well I love you so much, but do me a favor baby don’t reply because I can dish it out, but I can’t take it.”

The Front Bottoms turned out to be a much more lively band on stage. In most of their recordings, there’s a sense of calm about the band and they sound too clean. On Thursday, although there wasn’t a radical change of instrumentation, the band had a raw sound and lead singer Brian Sella’s nasally voice screamed with more emotion.

In their performance of “2YL,” The Front Bottoms addressed the very crowd that has listened to their music since 2008. “Yeah maybe that could be our thing, what do you think? I’m talking to young lovers and half price drinks.”

The bands were into it, the music was loud and rocking but very few members of the audience seemed to be having a good time. Aside from the clusters of head banging and jumping, most of the El Paso crowd stood still as if they would get in trouble for dancing. In fact, if a certain ecstatic fan heard the first few chords to his jam, he was looked at as if he didn’t get the memo that the cool thing to do in a crowd is to hold your girlfriend and stare blank-faced at the stage.

The bands head over to Corpus Christi tonight, working their way up to Pennsylvania before going across the pond to begin the international segment of their tour in Ireland.