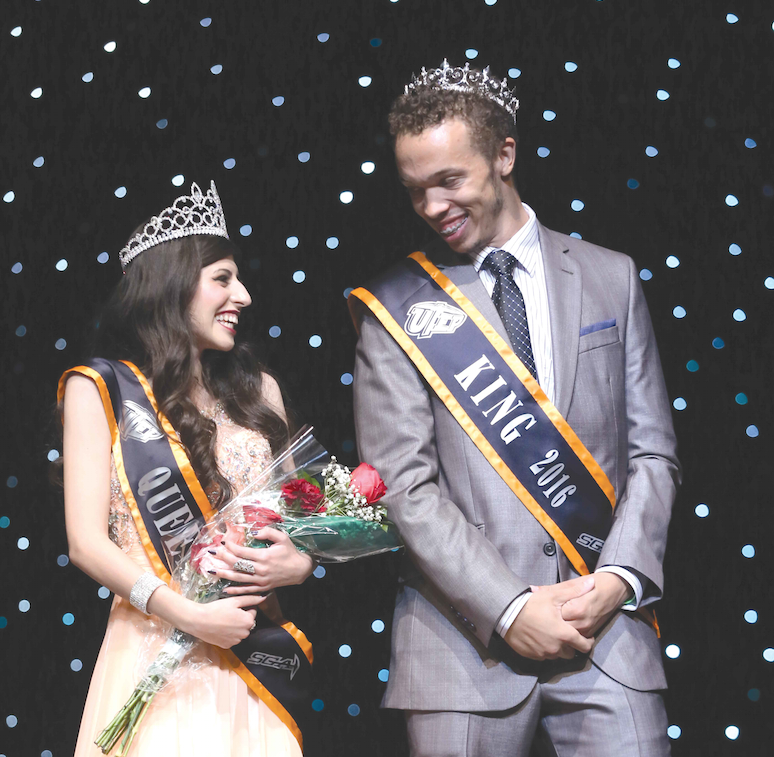 Sunday night’s 2016 homecoming pageant was a test of endurance for hosts, audience and contestants alike, but the almost four-hour competition proved to be worth the time for this year’s court.

Included in the competition was a talent portion and formal wear. Contestants opened up the night with choreography set to retro video game music, which was a nod to the arcade game homecoming theme.

While a handful of contestants tore up the dance floor, rapped and sang for their talents, most contestants chose to show off their abilities in skits and costume design.

Jean-Andre Moore, junior wide receiver for the football team and commercial music major, was crowned the homecoming king, if anything for the ease with which he commanded the stage.

“My organization is Lambda Chi Alpha and I know we get points for the homecoming competition for just participating,” Moore said. “But more than that I just love putting on shows for other people.”

For his talent portion, Moore took center stage armed with a keyboard and a carefully memorized Spanish cover of Enrique Iglesia’s “Bailando.”

“All week,” Moore said, recalling the first verse phonetically again for the interview. “I looked the lyrics up and knew I just had to get them down until they were in my head.”

Moore’s range of extracurricular ideas on campus fit in line with the rest of the contestants. Of the 25 students who competed, seven were listed as independent. While this is not indicative of these contestants’ involvement, it stands to show that the students who choose to participate in the pageant set aside the many hats they wear throughout the week.

The largest category of student organization participation, however, came from Greek life. Of the 18 contestants who competed in the name of a student organization, 12 represented a fraternity or sorority. Despite being a minority group on campus, members of Greek life proved to be the most supportive at the pageant, cheering to the tipping point of passing out for their members on stage.

“In the past couple years, when I helped with the pageant, there were not that many Greeks participating,” Hussein said. “But this year we had a lot. When I joined Zeta I wasn’t really involved and it was awesome to have them support me.”

Besides Greek life, the homecoming queen boasts an impressive resume of her involvement with the Women’s Advisory Council, Leadership Society and National Society of Collegiate Scholars and is closing in on an honor’s degree in mechanical engineering. To Hussein, the manic schedule can be managed by moving small time-wasters out of the way.

“You waste an hour either getting ready for something or being on the phone,” Hussein said. “So you might as well use that time doing something else like going to a UTEP or homecoming event.”

The homecoming pageant is the grand beginning of UTEP’s homecoming competition, in which student organizations fight to become homecoming champions. Moore and Hussein have both won points for their respective organizations, but their victory could be overshadowed if the rest of the week’s events are ignored. Pingpong tournaments, trivia and a lip sync dance battle are some of the highlights.

For a complete schedule of the week’s activities, visit alumni.utep.edu/utephomecoming.