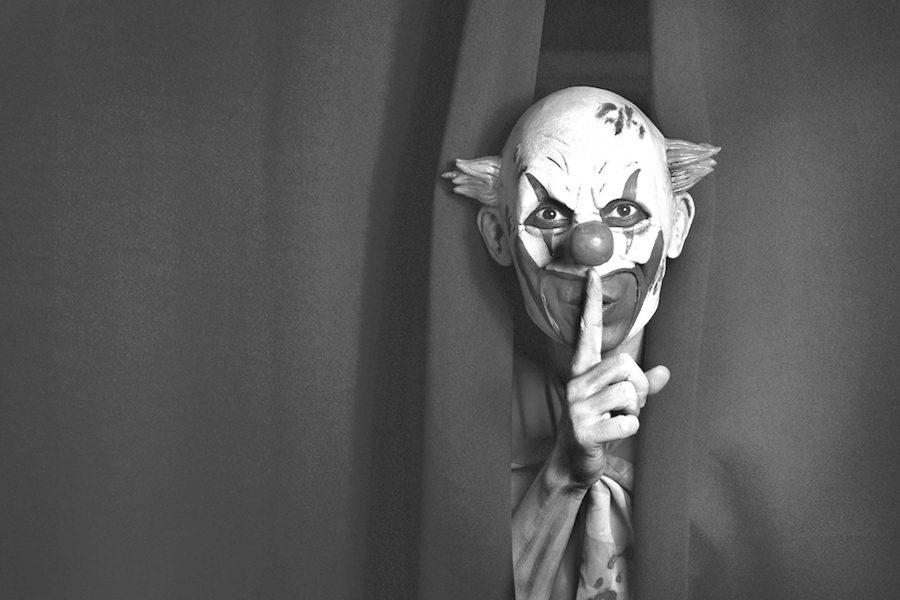 Halloween is fast approaching and the clowns have come out to play.

At least that is what headlines have been warning readers since late August when the first clown sighting occurred in Greenville, South Carolina. The Greenville County sheriff’s office received a call from a concerned mother reporting a person dressed in clown attire trying to lure children into the woods.

Headlines warning against events such as “13-Year-Old Arrested For Trying To Get Clown To Kill Teacher” appeared on TMZ WorldStar, and when several headlines depicted the same violent behavior, the terror spread nationwide.

The creepy clown panic made its way down to the borderland in early October after a Facebook user posted a picture of a red-haired clown walking downtown. “First one spotted in EP Downtown,” captioned the blurry picture, featuring a clown walking toward the camera with a bat in hand. A day later, another picture surfaced on Facebook of a similarly dressed clown walking at an intersection at Album Park on the East Side of town.

“We have taken on some calls, especially in the evening, with kids coming out to try and find these clowns, but as of yet we have not had any criminal incidents,” said Lt. Joe Castorena of the Socorro Independent School District Police Services in an interview with the El Paso Times.

Although the El Paso Police Department has not received any reports, officials are warning people against dressing like clowns or making fake calls to the police.  Law enforcement officials have been advising against using clown costumes this Halloween. For those who wear clown apparel as a living, following the police department’s advice is not so easy.

“My fear is that when we travel from one destination to another, drivers may mistake us as one of those creepy clowns while we’re driving,” Alfredo Zamora, an El Paso-based clown said. He performs under the name ZZ the Clown, along with his wife and son. “I don’t want to encourage a road rage of any kind.”

The violence accredited to this panic is not only spreading nationwide, but it is increasing in scale. Some of the headlines first published after the South Carolina incident depicted fake accounts of violence, but the incidents that have ensued from the panic have had serious consequences.

Las Cruces police are investigating a threat made to Lynn Middle School after a fake clown account posted a picture of the school along with a threatening message that read, “save yourselves.”

An El Paso-based Facebook page, titled Clown Hunters of El Paso, is calling for people to rally against clowns. Similarly, Penn State students organized a clown hunt at their university, despite the fact that police say there have been no sightings at the campus.

Despite the surge of violence, police are attempting to stay calm during prank calls. New York City’s Deputy Commissioner John Miller said on NBC Nightly News: “Our main message is: don’t believe the hype and don’t be afraid of the clowns.”

The message is clear, but people have failed to follow it. The attention the clowns are receiving is encouraging teenagers to continue with pranks.

Teenagers have been arrested in Arizona, Connecticut and Florida for wearing masks, terrorizing children and making clown threats to neighborhoods and schools. The most violent event documented is a 16-year-old Pennsylvanian teenager who was stabbed to death during an argument he had with a 29-year-old over his clown mask.

More and more events such as these are occurring around the country, including a Clown Lives Matter march in Tucson that was just recently canceled.

Although the hype and violence has not stopped nationwide, real-life clowns and entertainers are attempting to take back their image and reputation. The hashtag #realclownsareaboutlove is being used to spread positivity. Although this nationwide scare has affected schools, children, universities and teenagers, the often overlooked entertainers are also in real danger of being attacked as well.

“In my 17-year experience, very few incidents have occurred where a child was scared. It was because they’d seen a movie,” said retired performer Daisy the Clown.

Even the author of “It,” a book and movie based on a clown protagonist, is fed up with the image.

“It’s time to cool the clown hysteria,” Stephen King tweeted out on Oct.3.

What was once just an incident in one U.S. city has  spread to become an international scare. The terror has spread over to the United Kingdom, where a man dressed as a clown was seen on video wielding a chain saw against a group of people.

“My hat goes off to any party clown out there right now,” Daisy the Clown said.