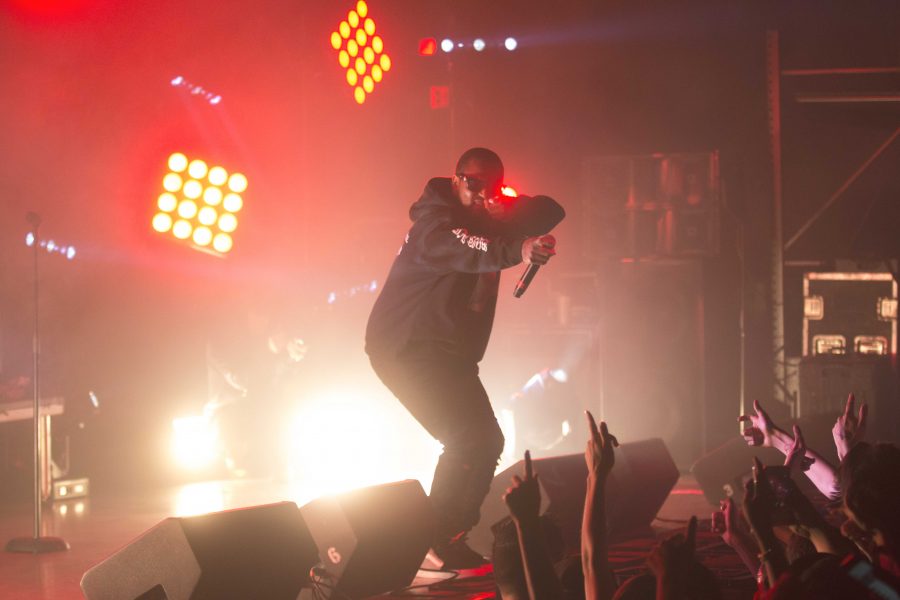 Bringing the Blank Face tour to El Paso, headlining rapper Schoolboy Q and opener Joey Bada$$ took Buchannan’s Event Center on Sunday, Oct. 9. The show was the tour’s last stop in Texas, as they had just traveled to Dallas, Houston, San Antonio and Austin prior to the show.

El Paso does not get high-end hip-hop concerts very often. In fact, it seems only once or twice a year a big name rapper makes a quick pit stop in El Paso.  Because of this, rap fans in El Paso rely on hip-hop artists making the Neon Desert lineup or their personal  pilgrimages to Austin, Albuquerque, Phoenix or Dallas to see a show.

However, when the city does snag a popular hip-hop rapper in the game, the El Paso crowd never fails to be as crazy and hyped as possible to leave a mark for the artist.

Commonly known for their electronic shows and raves, Buchannan’s was not expected to rally a hip-hop crowd. The venue  is an ideal location for  this level of celebrity.  The stage and audience pit are  a lot bigger than Tricky Falls, Mesa Music Hall or Lowbrow—where most  rap concerts are held.  The lighting, acoustics and space of Buchanan’s tears the close-quarters intimacy that most rap venues in El Paso elicit, making a concert like Schoolboy Q’s feel like a raging party.

Local up-and-coming artist Evander Griiim opened the concert early. He amped up the small crowd and drew people into the show right away. He ventured through trap-heavy tunes and mixed it up with some R&B hits.

Proceeding Griiim was DJ Slim, who travels on the Blank Face Tour to hype up the crowd before the two rappers took the stage. Slim played a long, dragged-out set that featured mainstream hits from the hip-hop world, and it was not until he brought additional individuals from Schoolboy Q’s crew, TDE, that the crowd started to hum with energy.

Then, Joey Bada$$ stole the stage for his debut in El Paso. The Brooklyn-based, Pro Era rapper viciously rapped through his most recent album “B4.DA.$$,” destroying verses on songs such as “Paper Trail$,” “Hazeus View,” and “No. 99.” He delivered a defining verse on “95 til Infinity,” and blessed the crowd with a new untitled track which abandoned his usual 90s-hip-hop-inspired beats  and replaced it with modern sounds.

The treat of the set  was when Joey played his classic track from his first mixtape, “1999,” “Survival Tactics.” In a beat, Joey  had his day-one fans rapping along.

He capped off his set with his most popular new track “Devastated,” which erupted the audience. After he finished his set, Joey smirked in appreciation for the crowd, a smirk that created more anticipation for Schoolboy Q.

After some impressive hype music from his DJ, Schoolboy entered the stage with smooth instrumentals, followed by “Gangsta” and “By Any Means.”

Schoolboy Q thought it was his first appearance in El Paso and greeted the audience as such. The audience corrected his mistake, but he masked his flaw by saying, “Well, I don’t remember the first one, so it might not have been good. That just means that tonight, we have to make this memorable.”

In fact, in 2014 when Schoolboy Q came to Tricky Falls, he did seem lethargic, and his openers, Vince Staples, Audio Push and Isaiah Rashad truly stole the show.

Nonetheless, the under-the-breath diss by Q fueled the audience to deliver the energy Schoolboy asked for.

Schoolboy Q flowed through his old tapes, “Oxymoron” and “Habits and Contradictions,” rapping old tracks like “Collard Greens,” “Hands on the Wheel,” “Yay Yay,” and “What They Want,” also delivering tracks from his new album “Blank Face,” Schoolboy Q hit an all-time high with “JoHn Muir,” “Dope Dealer,” and “St8 Ballin.” Even on “Tookie Knows II,” Schoolboy brought his two crewmembers from TDE, Traffic and T F onstage to enhance the quality of the impressive routine.

His best and also most surprising part of the night was when he performed “Blessed”—one of his old classics from “Habits and Contradictions.” It was accompanied by a heavy bass and amazing strobe lights. But, the best feature was how passionate Q rapped over the track—you could feel his energy and voice over the hard drums.

After he performed for nearly an hour, Schoolboy Q was extremely impressed with the energy of the crowd, stopped the music, and said, “You all beat out Austin, Houston, Dallas and San Antonio.”

After the grand acclimation, he wrapped up the event with “THat Part” and “Hell of a Night.” The energy was at an all-time high for both tracks as mosh pits induced and the entire crowd sang every lyric.

Schoolboy finished his final piece, gazed upon the roaring fans, and said, “I may have forgot the first show, but I’ll never forget tonight.”