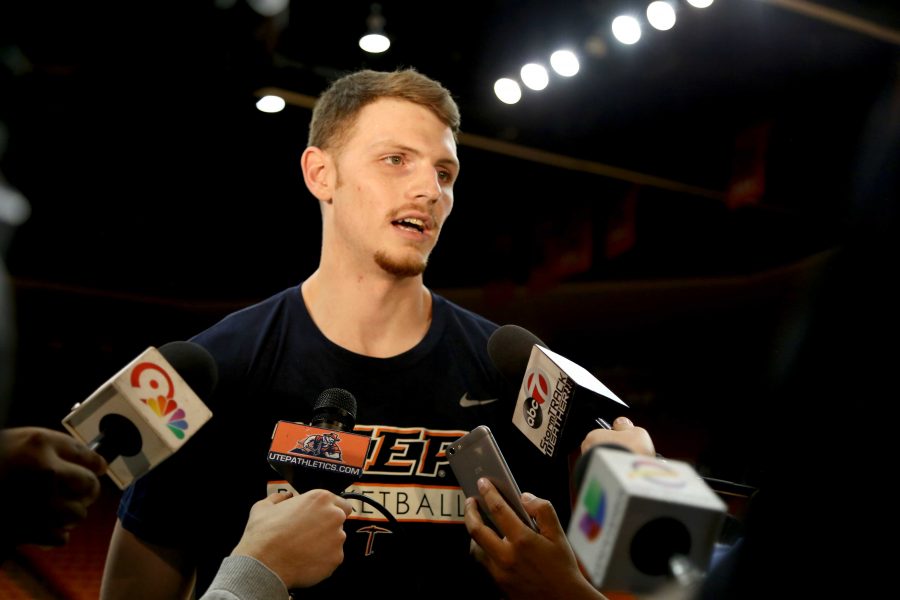 The Don Haskins Center will have one of the most anticipated returns with 7-foot-1 basketball center, Matt Willms, who missed the entire 2015-16 season due to surgery on his right foot.

Willms is a junior from Ontario, Canada and played for Findlay. The buzz from the returning big man is on the minds of El Pasoans, but more importantly, the UTEP men’s basketball team.

“In my opinion, Matt could be the best big guy in our league if he’s healthy,” head coach Tim Floyd said at the Miners’ opening practice. “We’ve got the potential to be a much better interior defensive team, a team that can protect the paint with Matt at 7-foot-1. We’ve also got the chance to be a better rebounding team.”

On Nov. 12, the Miners will open up their season against Louisiana State, where Willms will finally get to suit up for the first time in over a year. UTEP fans will get their chance to welcome back Willms during UTEP’s first home game on Dec. 7 against the New Mexico Lobos.

Last Thursday, Oct. 6, Willms participated in his first pick-up game in quite some time. Floyd could not wait to get Willms back on the court—the big man was missed dearly—and there are immense expectations on his return.

UTEP struggled last year with rebounds and getting key defensive stops in the paint. Terry Winn was the only Miners’ player to average over six rebounds per game, and UTEP lacked a defensive presence in the paint. Willms averaged over one block per game his 2014-2015 year, and his presence on the court could not be matched once the injury took him out of play.

The Miners were outside of the top fifty in rebounding last year as a team and found themselves ranked 160 in blocks per game, with only 3.5 per contest—all without the big man from Canada.

Senior point guard Dominic Artis was not hesitant to praise his big man knowing he has the missing piece back for his last year of play. When asked about Matt’s impact on this team, Artis’ face lit up as if he saw the light at the end of the tunnel.

“It’s great (to have Willms back),” Artis said. “Rebounding is definitely going to be improved, having a bit of size, changing shots is going to be huge.”

The two centerpieces of the basketball program, Artis and Willms, will look to raise some eyebrows this season, and make UTEP taste some of the success the city has been starving for.

Matt Willms had the same injury, stress fractures in the foot, as some of the notable NBA players, such as Kevin Durant, Joel Embiid, Brook Lopez, and Jrue Holiday. This injury has caused the suffering stars to miss a considerable amount of time. For example, Kevin Durant was forced to miss most of his season back in 2015, and Embiid missed his first 2 seasons in the NBA.

Willms knows how fortunate it is for him to be back on the hardwood with his teammates. He is confident that his play will assist the Miners’ needs.

“Coming off an injury last year that was pretty devastating; there have been many players with my foot injury that haven’t been able to play again,” Willms said. “As of right now, I’m very grateful that it’s held up. Hopefully, I can help out this team at a position we didn’t have last season.”

In last year’s Conference USA tournament, the Thundering Herd of Marshall put UTEP’s season to rest with a nail-biting loss 87-85. This killed the Miners’ hope to regain a bid in the NCAA tournament, a bid the basketball team has not had since 2010.

“I feel with more height this season, it’s going to be a lot harder for teams to get into the lane,” Willms said.

One play still keeps Willms up at night. A layup from Marshall that decided UTEP’s fate, the game-winning bucket that Matt could have stopped to save the Miners’ season.

“The one play that I remember clear as day was when we played Marshall and they had that easy layup right to the lane to finish off the game in the conference tournament,” Willms said. “I just look at that and it was lack of size.”

Coming into the season, the Miners are picked to finish sixth in conference play, but according to the players, the sky is the limit with the backcourt and size added this offseason.

And, if Willms has any say, he will make his last ride on the Miners one for the books.