The skater and pedestrian: tips for coexistence 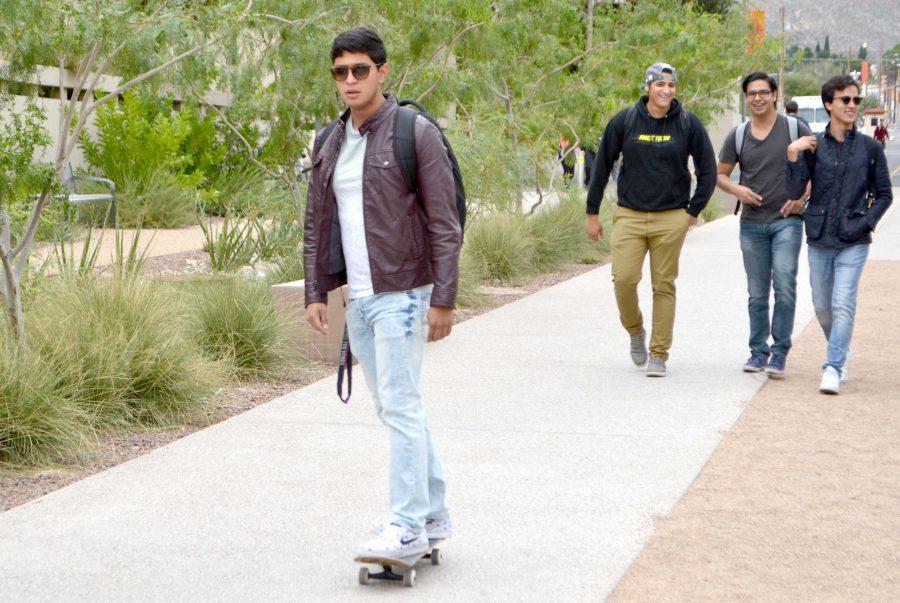 Skateboarders, longboarders and penny boarders often cruise between pedestrians on campus to get to class.

The era of campus construction is finally over, and more students have been able to use alternative methods for commuting between classes. While bikes have always been a popular choice and hover boards are finally going out of style, this semester more students have been riding longboards, skateboards and penny boards to get around. Here are a few tips for skaters of all types to keep injuries and fights resulting from an angered (and injured) pedestrian.

The campus gets crowded after early classes let out at around 9:30 a.m. and at 11 a.m. when students head to lunch. You won’t be able to ride on the smooth sidewalk for more than a few feet before getting stuck behind a cluster of students, so it’s best to walk or take to the street and grind through the cracked pavement.

Call out which side you’re passing on

A quick “On your right!” call will leave you a lane to pass through and will prevent a collision when a student suddenly decides to cross the street. It may look uncool, but what’s also uncool is knocking down a pretty girl in a dress.

Don’t treat a pack of students like a bonus round

These aren’t fallen branches or rocks to test your turn radius with ­—they are people too. As much as it sucks to lose your speed and jump off your board, moving around the pack is your best bet. With all the time you saved riding up to this point, picking the board up for a few seconds will not make you late to class. That, or for the more daring riders, screaming nonsense like “pizza!” while waving your arms wildly will clear the crowd.

Visitors to UTEP love how snug the campus fits within the mountains. These people have yet to run from the Union to Old Main to get to class on time. Campus is all hills, and a well-planned route could save you minute—and sweat—from walking uphill with your board. Misjudging a hill on campus, however, could push you past the limit of a foot-brake and into a car.

Recover from a crash

Skating makes you look cool, no doubt about that. Gliding down the sidewalk with your backpack says something like “I devour knowledge, but I also own fake Ray-Bans.” But what’s not cool is a wipe out. You’ll clip a curb, maybe turn too hard and land on your face or your board might slip out from underneath you like a banana peel. It happens, so the best thing to do is to get up and shake it off. Someone definitely saw you, so take a bow and chase down your board, it’s probably the most exciting thing anyone has seen all day.

Wear earphones, but stay in a lane

We get it, Drake can drown out your sorrows in the world, I’m sure, but it’ll also drown out a screaming skater warning you to get out of the way. Keep jamming, and while it’s best to not wear headphones at all, make sure keep from zigzagging all over the sidewalk to save yourself some wood to the backs of your heels.

Walk the gravel by Centennial Plaza

Who knows why the University thought putting dirt on one half of the walkway would be a good idea, but between wheels and feet, feet fare better in the dirt. It’s a gesture of good will, just as them not crashing into your heel is a gesture of good health.

Skaters will usually weave around pedestrians, so don’t freak out and cause a collision. Trying to juke them out will scare them, forcing them to react by trying to cut a quick turn, probably in the wrong way. At best, just stand like a pole and make eye contact with them, a look that says “I’m not moving so you can. Watch my shins please.” More often than not, they’ll cruise by no problem. If you do freak out and a collision does happen, at worst you’ll end up with a bruise, at best you’ve just began a rom-com -styled first encounter with your future spouse. What? It can happen.

Move on after a crash

It’s totally understandable: you are completely zoning out thinking about lunch or drumming up an excuse to skip class, maybe thinking about cats for some reason, when out of nowhere a guy flies shoulder-first into the street and flops like a doll. Ask if they’re okay and make sure there isn’t any blood, but other than that carry on about your day as usual. They’ve crashed before and are completely aware that everyone, including Dr. Natalicio (probably), saw them eat it, so let them collect their dignity in peace. That and tell your friends about the weird little squeal they did when they hit the ground.

See something cool? Let them know

Standing on a board is hard. Standing on a moving board is harder, but standing on a moving board in public and looking like you belong on it? It takes a few long nights in the driveway practicing in order to pull off the look, and if one brave soul lands a trick while on his way to the Liberal Arts building, just give him a clap, a quick “woo-hoo” even. That kid sacrificed his pride and his jeans on a Wednesday, all just to give you something cool to look at, so thank him for it.

Eric Vasquez may be reached at [email protected]