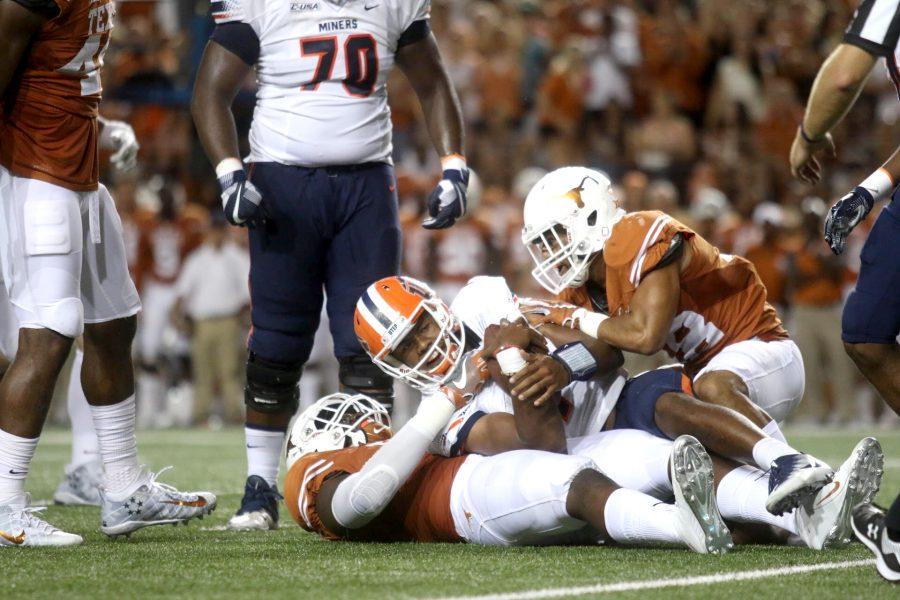 AUSTIN, TEXAS—Deep in the heart of Austin, David squared up with Goliath in front of 92,863 beaming Longhorns fans. And, from the opening kickoff, the Miners ran out of steam against 11th ranked Texas, as they fell 41-7.

The game showcased two major storylines: Texas is for real, and the Miners have a ways to go to find their niche. It looked as if the UTEP offense was beat by the Longhorns’ quickness, and the Longhorn offense was hungry to continue their dominance.

The Miners fall to 1-1 on the season, while Texas shines brighter at 2-0.

“These non-conference games help us prepare bet for Conference USA,” head coach Sean Kugler said. “I think we played physical and showed we can play with a big team.”

The first two drives went back-to-back series resulted in a punt; but, after a poor UTEP offensive pursuit on the second drive, the Longhorns took over and comprised a three-play, 60-yard drive that resulted in a Shane Buechele dart to Jerrod Heard in the end zone.

It was not until 8:28 in the second quarter that the Miners got their first and only break of the day. Running back Aaron Jones shook off a tackler and hauled a 51-yard run to the goal-line. That was the last glimmer of daylight the Miners saw for the rest of the game.

Coming off a week where the Miners put up 544 total yards of offense, UTEP scratched to put up 208 yards against the Horns. However, fronted by Buchele, the Longhorns dominated the offensive side of the ball with 416 total yards, 245 of them being through the air. Buchele finished the game completing 22-of-27 for 244 yards and four touchdowns.

UTEP’s offense was bruised when they found out earlier this week that starting quarterback Zack Greenlee would be sidelined up to two weeks after suffering a MCL injury. Backup Kavika Johnson was left to fill the starting job for the Miners, but, the Longhorn defense was too much for the young quarterback. Johnson suffered throughout the game, only completing 9-of-15 passes for 42 yards.

A positive portion of the offense was tailback Jones’ 18 carries for 123 yards, which marks him at 372 yards for the season. Although he did not finish the game, according to Kugler, it was to keep him from getting hurt.

“I thought Aaron was the best player on the football field,” Kugler said. “He easily could’ve gone over 200 yards over a Texas defense, but there was no reason to keep him in that game.”

He even egged on defensive end Breckyn Hager of the Longhorns.

“You can’t sleep on him,” Hager said. “He’s a superstar and he hits the hole fast. He’s good and he’s fast.”

Jones’ brother Alvin had six early tackles for the Miners; however, he was sidelined for the second half due to a high ankle sprain and was in crutches. While Kugler was unsure of his injury, Aaron claimed he will be okay.

The defense showed promise, holding the Longhorns on several occasions, and adding notable pressure to their quarterback. Despite the 41 points on the board, the defense hung in the game during suspect situations by the Longhorns. Dante Lovilette led the defense with eight tackles, while Nick Usher came in second with 6.5 and two sacks.

“I feel like at the end of the game we slowed down a bit,” Usher said. “But we are going to get the job done this week and have a big game next week.”

Next up, the Miners will take on Army at home on Saturday, Sept. 17, in the Sun Bowl.
Adrian Broaddus may be reached at [email protected]