Can UTEP saw off the Horns? 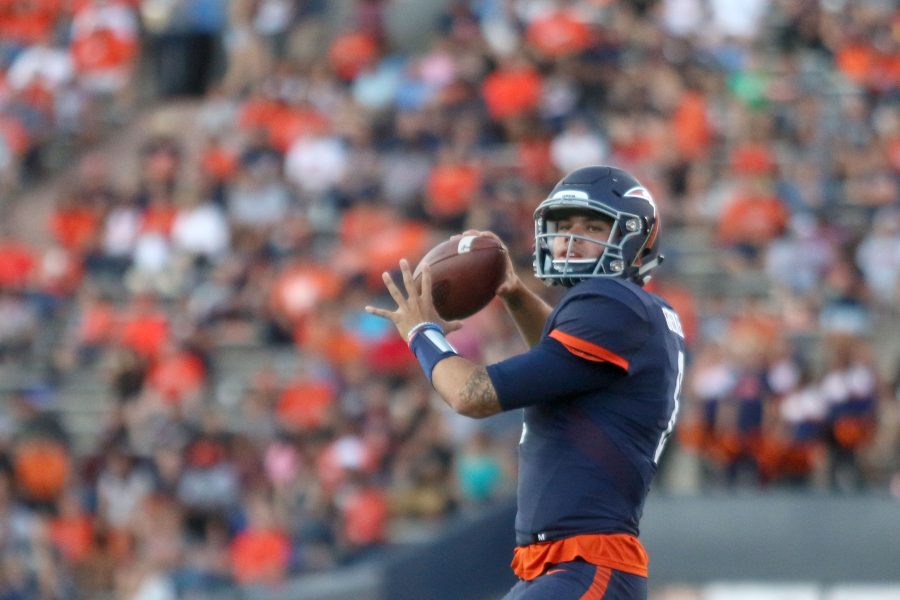 Short answer: There is a slight chance, but it would not surprise me.

Long answer: the Miners raised eyebrows after their 38-22 victory over NMSU; therefore, this assertion on an upset can possibly be made.

Below is my top five keys to the Miners standing a chance against the Longhorns on Saturday, Sept. 10, in Austin, Texas:

5. The Miners need balance in their offensive game

Head coach of the Miners, Sean Kugler, does not have to hide the fact that their offense primarily relies on running back Aaron Jones and the run game. However, a strong determining factor for Saturday’s matchup is if UTEP can catch the Horns off guard through a balanced air raid attack and effective run game.

Against the Aggies, the Miners totaled 518 yards on offense, which included 229 yards through the air by junior transfer quarterback Zack Greenlee. Greenlee found the goal line three times through the air and completed 15-of-27 passes.

The Longhorns allowed 238 passing yards against Notre Dame in their first week, but head coach Charlie Strong is expected to tweak his different faults on offense. They also allowed 444 total yards against the Fighting Irish. Notre Dame was able to effectively produce operative drives through the air and on the ground.

Something to note is the fact that Greenlee played in only his first game with the Miners, and the playbook against NMSU did not show much. There is still much for the Miners to show through the depth of their playbook, and if the Miners find the end zone through a balanced attack, they might cause distress to the Horns.

4. The Longhorns coming in too overconfident

Yes, the Longhorns just upset the no. 10 team in the nation—Notre Dame. Yes, they defeated the Fighting Irish in their season opener at home. Nevertheless, Strong and his Horns must be feeling a little taller than before.

The only thing UTEP can hope for is that come Saturday, the Longhorns enter the game thinking they are a goliath, but end up getting caught off guard and tricked by David.

This year, with a young burnt orange team, the Miners could catch the Horns off-guard early again. UT has a young quarterback, a young offensive line and a young receiving group, who all could make mistakes. The question is whether or not the Miners can actually keep it up for the entire game.

With a quick start, minimal mistakes, and scoring points early, the Miners could set themselves up for an actual ball game.

During the crunch-time moments against the Fighting Irish, it was the fans that brought excitement, which energized the Longhorns to rally and win. These fans are the same group who seemed impatient with Strong time and time again. To start the season, the fans appeared to put the past behind them and trust in Strong’s third season with the team. They were the determining factor of the Longhorns’ 50-47 overtime victory.

Kugler’s squad will have to slow down the pace and not allow the home team to catch heat or momentum. If the Horns create big plays, cause turnovers, or hold a long drive, the fans could respond with roaring background noise and cause trouble for the Miners’ momentum.

The key to stopping the Horns’ momentum is keeping them from making big plays, whether it is on the ground or through the air. Also, the Miners need to create big plays of their own to qwell UT’s spirits.

If they keep the roar of the stadium to a minimum, the Miners could have one less factor to deal with.

2. Enforcing the play of the linebackers

UTEP defensive coordinator Tom Mason’s new 3-4 scheme debuted for the first time against the Aggies on Sept. 3, and, despite minor faults, the defense showed promise. Eight Miners had four or more tackles against NMSU, and four of them were linebackers.

On paper, the Miners’ linebacker core is at a high this season. With Alvin Jones leading the charge, the linebackers have the potential to wreak havoc for defenses. Jones led the NMSU game with 12 tackles, followed by fellow linebacker Nick Usher with seven.

The strong part of the linebacker group is their ability to rush the pass and cause hurries, while still being able to cover successfully in the zone.

If the linebackers can prevent the play from going beyond them and into the secondary, the Miners could see a strong defensive pursuit.

They only have to hope for one thing—that the defense is not on the field longer than the offense; or the defense can at least rest for a substantial amount of time before being placed out on the gridiron.

The linebackers could make or break the game  for the Miners.

1. Who will win the day on the ground? Aaron Jones or D’Onta Foreman?

As the college polls roll in, one of the most impressive stat lines is Miners’ Aaron Jones leading the nation in rushing yards after his 249 field day versus the Aggies. He beat out college football greats such as Georgia’s Nick Chubb

Also, Aaron had two touchdowns—one for 37-yards and a beautiful 75-yard dash. Skepticism claims that Aaron and the Miners’ rushing core is not ready for a Big 12 school’s defense; however, Aaron has been notorious in showing up in big games against big teams, such as Texas Tech (2014 and 2015) and Arkansas (2015). Aaron is no stranger to the big time, and will be the defining factor for this game.

On the Longhorns’ side, Foreman and his committee rushed all over the Fighting Irish. Foreman, the 250-pound tailback, combines elusiveness with power to make for a strong halfback. If the Miners stop him, then the Longhorns will have to rely on quarterback Tyrone Swoopes and running back Chris Warren III to lead the rushing group.

Both sides’ defenses let substantial rushing yards get by. Texas and UTEP let 206 and 139 yards of rushing slip through, respectively, through week one of play.

It will be up to whoever better adjusts for the run game on Saturday that will probably come out victorious. Expect a run-heavy game with big plays to make the determining factor of who comes out on top.