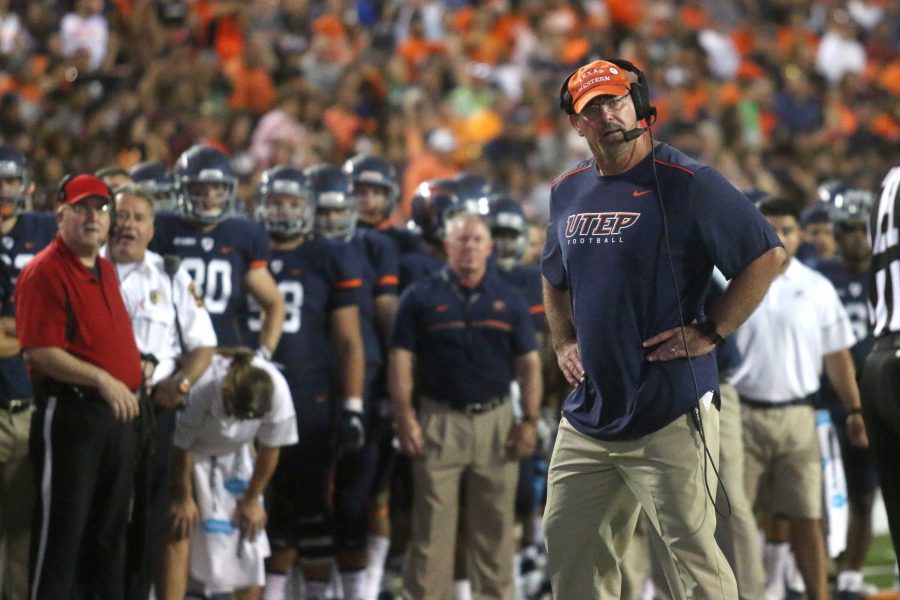 The UTEP football team will travel to Austin on Saturday, Sept. 10, to face the Texas Longhorns in the venerable Darrell K. Royal–Texas Memorial Stadium. Both teams are coming off of emotional victories, as the Miners defeated rivals New Mexico State Aggies at home, 38-22, while the Longhorns bested the no. 10-ranked Notre Dame Fighting Irish in double overtime, 50-47.

The Miners defeated  NMSU rather soundly despite a late second-half surge aided by a UTEP turnover. That mishap turned into an easy Aggie touchdown. Running back Aaron Jones showed no ill effects from last season’s ankle injury as he ran wild over the NMSU defense aided by phenomenal blocking from a beefed up offensive line. Jones currently leads the nation in rushing following his 249-yard, two touchdown performance.

The Brent Pease-led offense continued to run the football up the middle in the style of a Sean Kugler-led squad, but there were flashes of Pease as well. The repeated passes to the flat to Aaron Jones had the defense off guard, when Cole Freytag broke for the end zone on a 46-yard pass from quarterback Zack Greenlee. Greenlee’s first game as a Miner was a spectacular one as he went 15-for-27 for 229 yards and three touchdowns.

On defense, the Miners all but shut down the Aggies’ running game with star running back Larry Rose III on the bench still recovering from hernia surgery. On the day, three running backs could not total 100 yards and the leading rusher was quarterback Tyler Rogers with 63 yards. Defensive captain Alvin Jones led the way with 12 tackles, one for a loss.

The secondary made plays all evening when UTEP needed them by laying big hits on receivers to separate them from the ball. Cornerback Nik Needham and safety Brendan Royal each had three pass breakups.

The game went entirely UTEP’s way—minus a late fumble by the Miners’ freshman running back Quadraiz Wadley. For the eighth year in a row, the team was able to defeat their rival from the north and keep the Shovel and Spittoon trophies in El Paso. After the game, running back Aaron Jones was emotional in talking to reporters and his teammates following his return to competitive football.

In Austin, the Longhorns had an emotional win of their own as embattled head coach Charlie Strong was able to lead his team to victory over their highly ranked visitors Notre Dame. It took two overtimes and a Vince Young-like run by number two quarterback Tyrone Swoopes; but, in the end, the Longhorns prevailed and look like they could once again be a contender in the Big-12.

Like UTEP, Texas hired a new offensive coordinator in the offseason in Sterlin Gilbert; and Gilbert chose a new starting quarterback during fall camp in freshman Shane Buechele. Gilbert’s offense was very different from the Longhorn’s offense last season, which was often times stagnant. Buechele was given the freedom to gunsling, and the team was 16-for-26 with 280 yards and two touchdowns in his first game with the Longhorns.

The Longhorns also had a good running game out of their junior running back D’Onta Foreman, who had 131 yards and a touchdown. The real rushing story, however, was in Texas’ usage of back-up quarterback Tyrone Swoopes as a power back. Much like the Miners will use quarterbacks Kavika Johnson and Ryan Metz during the season, Swoopes came in and ran the ball 13 times for 53 yards and scored three touchdowns.

His most important contribution came in the second overtime, when Notre Dame had been stopped by the Texas defense and held to a field goal. Swoopes’ touchdown became the game winner that could vault the Longhorns into the top-25 prior to their meeting with the Miners on Saturday.