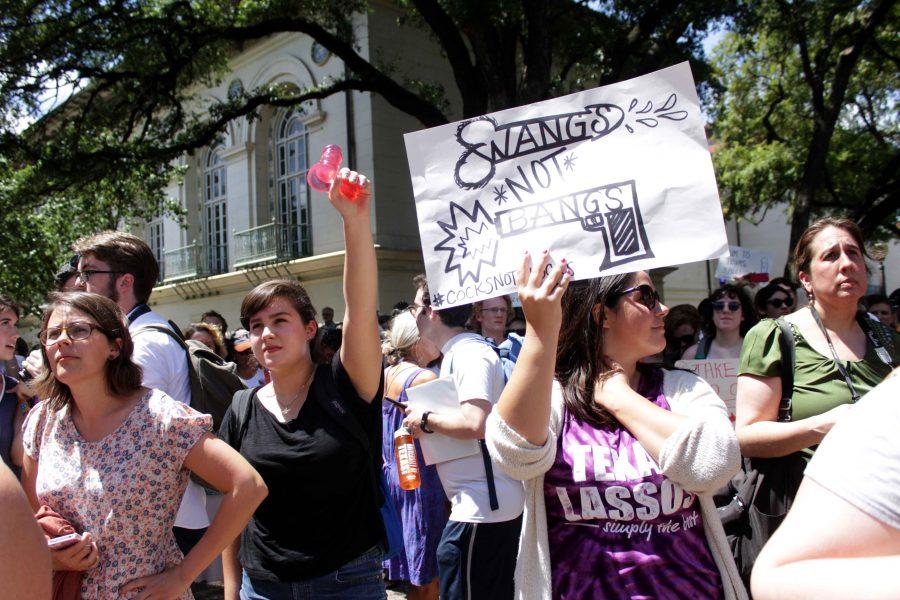 Angel Ulloa / Special to the Prospector

Students at the University of Texas at Austin gather to protest the campus carry law that went into effect August 1, in a movement they call Cocks not Glocks.

On Wednesday, Aug. 24, students, faculty, staff and alumni at the University of Texas at Austin held a demonstration in protest of the recently implemented concealed carry law on public university campuses, including UTEP.

A recent ruling by a district judge denied the preliminary injunction by three University of Texas at Austin professors to temporarily halt the concealed campus carry law while the lawsuit continues. The professors claimed that the law was a violation of their first and 14th amendment rights in part because the presence of guns would stifle conversation about controversial issues.

Dr. Jennifer Glass, one of the University of Texas at Austin professors involved in the suit, gave her reaction to the judge’s decision in an email.

“We are of course disappointed in the ruling on our request for a preliminary injunction, but we knew this would be a long struggle to keep our educational environment free of any restraints on the vigorous expression of ideas,” Glass said.

The #cocksnotglocks organization says on their Facebook page they are going to continue this particular form of protest until the law allowing concealed carry is repealed. Other protests are being taken up at the Austin campus as well.

Judge Lee Yeakel said in his opinion that the professors failed to prove that their first amendment and their 14th amendment rights have not been violated.

But the fight is not over, while the law will still be in effect, it is still possible for SB11 to be overturned.

“The case will move to trial hopefully sometime this fall,” said Glass “This is just the first round. I will be using some class time this week so let my students know that the classroom is their space, and that in a democratic society they have the capacity to collectively decide whether to make it a weapons-free space or not.”

Christian Vasquez may be reached at [email protected]il.com.